One More Duck in the Pond: My Year in Teal

It's been a good year for me, with paperbacks.

When I was a kid, I bought paperback books by preference, because that way, I could buy more. There was a time, just before I went to college, when I had hundreds of paperbacks, so many in fact, and so badly housed, that one night my shelves collapsed at the foot of my bed and buried me. My parents, asleep in the room next door, thought a coal truck had hit the house. When I started earning my own living, I started collecting hardbacks, because they are nicer. Yes, it is an affectation. Yes, I was fantasizing myself in the book-lined library of an English country house, smoking a pipe and sipping sherry -- which it turns out I actually rather like --surrounded by leather-bound books. Never happened, of course. Still, I am in a library, mine, as I write, and yes, the walls are book-lined. In fact, the floor and the furniture are covered in books as well. There are a few books here that actually have fine bindings, but they are as few as the paperbacks. I married a great guy, but, alas, I did not marry a Lord. Oh well. But even if they aren't priceless, privately bound treasures, my books are good books, for the most part, and will probably outlive me. I'm glad I converted to hardcovers. Hardback books are easier to read, generally; the type is bigger, the margins wider, the illustrations, if any, actually to be seen. Hardcovers tend also to be more durable; better made, printed on better paper, less likely to fly apart when dropped, or shed pages when opened at odd angles, or to crumble away to dust quite so fast on the bookshelf. I'm too clumsy for paperbacks. When we moved to San Francisco, or thereabouts, I finally determined to sell off all my paperbacks, at least all but the irreplaceable few. My friend Peter borrowed a delivery van from the restaurant where he worked and we spent the day, driving up and down the city as we sold off my paperback books. More than once that day, on more than one hill, Pete cursed the ancient stick-shift in the van, cursed the ancient van, cursed the weight of my books, cursed San Francisco's city-planning, cursed me. I bought him dinner with cocktails, after, and all was made right. From that day to this, my library has had very few paperback books in it.

Then came the Espresso Book Machine to the bookstore where I work.

Another reason I prefer hardcover books, or rather, another reason I almost always end up owning so many? Back in the day, publishers like Penguin, and imprints like Anchor used to have the most amazing backlists of classics in inexpensive, paperback editions. (For anyone not in the books business, or anyone too young to remember what that used to mean, the "backlist" was what kept publishers, and independent bookstores, in business: every title kept in print after its initial publication became a part of that publisher's back-list, literally the back of the publisher's catalogue. When someone spoke of, say, Knopf's books, and authors, what was meant was not just whatever books had shipped that day from New York, but all the titles that Alfred Knopf printed and kept in print, and all the authors, like H. L. Mencken, Ezra Pound, Elinor Wylie, John Updike, with whom the publisher had an established relationship, writers in whom the publisher believed, and continued to pay, promote and encourage year after year, book after book. Backlist also meant all of the public domain titles that a publisher like Penguin kept in print, not because Charles Dickens might get picked by a national book club, but because Charles Dickens wrote great books. I know, crazy, huh?) The days when a reader could count on finding an attractive, affordable, paperback edition of almost any book by almost any writer of any reputation in the English language are over. The backlist is dead. The common explanations of this -- that nobody reads books anymore, that agents and lawyers ruined the relationships between authors and publishers, that bookstores that stock backlist titles lose money, -- all of that is bullshit. What killed the backlist? Entertainment. No, I don't mean television or technology. When American publishing ceased to be a business and became a subsidiary of multinational entertainment conglomerates, and when bookstores, in national chains, took to the same rough business model, treating books as an adjunct to coffee, and CDs, (remember those?) and greeting card sales, that was what killed off the traditional business of bookstores, publishing, and the backlist. Unlike the business in the days of the great Alfred Knopf, for example, the nearest thing American publishers have now to a mission or taste or a personality, is a few powerful editors, and even they are dependent on producing "hits," i.e. the kind of blockbusters that promise the shareholders in multinational entertainment conglomerates something like the kind of profits that a hit movie or television show or video game might. The people who now oversee American publishing for their corporate employers -- can't really call them publishers, in the old sense, so lets just call them what they are, the BAs -- have roughly the same relationship to someone like Alfred A. Knopf that a pimp in a titty-bar has to a Diaghilev. Just in it for the tips, this lot. Doesn't mean that American publishing isn't still full of people devoted to books, to literature and to writers, but they now work, rather than for publishers, for touts -- and increasingly greedy, stupid and panicked lot of barkers they are, too. The suits may still be tailored, but the taste isn't there anymore. American publishing is now run by corporate entertainment lawyers, accountants and bankers; not the sort of people known for their devotion to culture, or for their refinement, now are they? (Try to explain to a corporate entertainment attorney why giving Paris Hilton a million dollars to "write" a book is not the same thing as publishing, or why such an object is not even a book, and, I would imagine, you will have some idea of just how heartbreaking it must be nowadays to work at what was once Simon & Schuster, now a "division" of CBS Corporation, aka Westinghouse Electric. Yes, Miss Hilton's two published... things... made money, we are told, but how many backlist titles became "unprofitable" and went out of print to pay that creature her money? And to pay the man who signed her contracts?) So even if I wanted to read paperbacks, with every passing day, the selection of the backlist available to me has disappeared. As my tastes have matured, my options have narrowed. For someone like me, I can read primarily used books, or nothing at all. If I'm going to buy used books, I might as well buy books that weren't printed on crumbling newspaper stock, in fading type, etc. That's meant old hardcover books, for me. 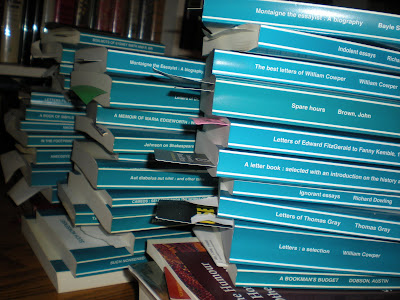 And now, the good news. Thanks to yet another wonder of modern technology, and the not entirely to be trusted intentions of the folks at Google, I can now cause to be printed for me, in roughly twenty minutes, while I wait, not just backlist, but books so far from being profitable for publishers to reprint that not even I would suggest someone needs to see that Austin Dobson be returned to the retail shelf.

I've ordered and read more than three dozen titles, so far. None of these books could I find, or afford, even as used. Here they are though, stacked right on my humble desk. Memoirs of and stories and essays by Maria Edgeworth, "the Irish Austen," books by Dr. John Brown, or about Montaigne, letters written by the poets Thomas Gray and William Cowper, poetry by Walter Savage Landor, sermons -- yes, sermons! -- by Sydney Smith! Books by Samuel Johnson, Charles Lamb, anecdotes, and bon mot, parodies and nonsense, biography and table-talk, and all, or nearly all of them in these uniformly hideous white and teal paper covers, books I've come to love and could never afford to buy, were it not for the Espresso Book Machine, the great bookstore where I work, and the great libraries of the world that have kept these books, if not always in pristine condition.

The color teal, as I understand it, takes its name from that rather dazzling plumage just 'round the eye, or here and there among the feathers of a particular male duck. Not an easy color to appreciate in any more extensive display, I grant you. Far from my favorite. The duck at the head of this entry is, in fact, a teal. Pictured though is the female. Not so gaudy as her mate. Truth be told, rather a dull duck, as ducks go, I should think. Necessary though, for the survival of the species, obviously, and in her way, I should say, the superior animal of the couple, as the female so often is in all but flash. She may not look much, but wouldn't want to see a world without her, would we?

I won't labor the point further, but I will just point out that literature requires conservation. It's no good to anyone if it becomes something encountered only in museums or kept in carefully tended and protected preserves. We human beings need literature, in all its diversity and richness, to know our own humanity, and just as we need and are dependent upon nature to sustain us, and have the capacity now to undo ourselves by neglecting and polluting the world around us, so too we must commit to sustaining our literature, if we are not to leave this world in a far worse state than we found it.

Seems to me, this new machine of ours, this EBM, that can make me a paperback book, at an affordable price, in less than half of an hour, is about the first good news about books and publishing and bookstores, that I've heard in a good long time. Getting a copy printed of In the Footsteps of Charles Lamb, by one Benjamin Ellis Martin, just for me, for just eight dollars, may not do much to save the world, but it's a start, isn't it? One more duck in the pond.