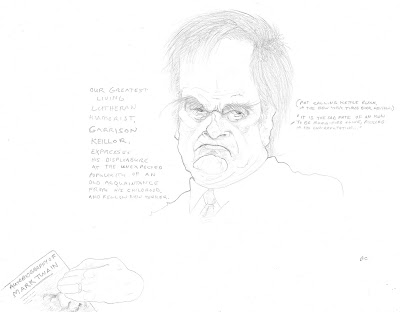 I'm not in the habit of reviewing reviewers and can frankly think of few things more pointless. However, just this once, let me just say that while none of the criticism Garrison Keillor leveled at the new edition of Mark Twain's Autobiography in the New York Times Book Review seemed to me to be less than honest, and much of it true, I was more than a little amused to see this cranky old man being quite so vociferously unpleasant about another, and better cranky old fellow's last salvos from the grave. Unlike Mr. Keillor, I've enjoyed the book, and am glad of it, whatever it's demerits. So, it would seem, have a lot of other people been. Now, he may well be right in describing the book as likely to be among the much purchased and unread books this Christmas, but then, that would seem to be a market to which Mr. Keillor has been catering for more Christmases now than I am prepared to number, or at which, as a bookseller, I should like to scoff.

"Here is a powerful argument for writers burning their papers..." says Keillor. I can't agree, but then I doubt I'd be among the few mourners should Keillor decide to burn his. Though I will say, professionally, I'd hate to not have the reliably mild, all but annual wheel of Wobegon cheese he produces to recommend to the more unadventurous customer in the bookstore, as a gift for their duller relatives in the remoter parts of the Republic.