A Couple of Collaborative Doodles

Here are a couple of recent examples of how doodles often happen when one works at the Information Desk in a bookstore. The first is the more common occurrence. Someone scribbles a note, presumably while on the phone with a customer, and then completes the call and forgets the note. Someone else, me in this instance, comes to the Desk, say an hour later, and finding the note, commits a doodle on it. In this example, someone simply wrote "Husky Football." The Huskies are the sports teams at the University of Washington, the school the bookstore serves. The football program, once great, now stumbling a bit for a few years, is much beloved hereabouts. People at this time of year are often looking to buy a nice book on the team to present as a present at Christmas, either to some devoted long-time fan, to maybe cheer them up a little and renew their faith in these troubled times, or the customer wants a nice book on the team to send to a relative who has betrayed family and tradition and moved away from Seattle and perhaps been seen publicly wearing say, red, instead of purple. In despair, friends and family will send a picture book about Husky Stadium, or a biography of some coach from the glory days, to the apostate, hoping to shame them back into the fold. Lots of reasons to buy books on this subject, and lots of reasons for a clerk to write those two words on a piece of scratch paper. 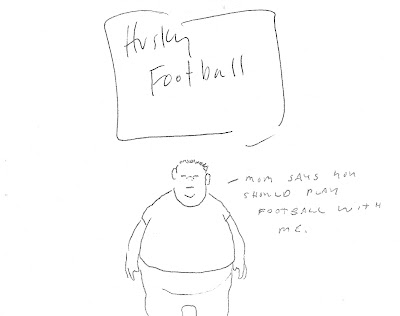 The way my wee mind works though, perhaps because a) I'm not a native, and b) because what I follow of football tends to be only either the T-shirt sales that help keep my employers afloat, or the occasional scandal, I still find those two words, "Husky," and "Football," amusing when combined. Shocking, I know, at least to my fellow fans of the "Dawgs," but there it is. 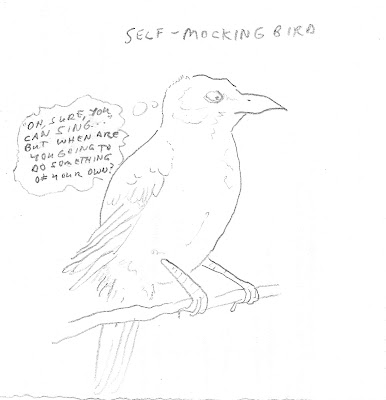 This other is an example of something much rarer, an actual, intentional collaboration. Folks will start conversations with me, now and again, by saying something like:

"You know what you oughta draw?"

What usually follows is some amusing description of either something I couldn't draw, or wouldn't. This has been happening since I was a mite. I drew before I talked, according to my mother, and people who don't draw themselves, usually, will often have an idea for a cartoon, or some comment on the world stage they're eager to register. This seldom works out. Back in the day, I was often encouraged by well meaning adults, to try my hand at sketching politicians and the like. Now anyone could caricature Nixon, but he already was a caricature, so where was the fun in that? Then there was the likelihood that whatever I was asked to illustrate was probably going to either offend someone, intentionally or no, or that my drawing would be inadequate to illustrate some over-elaborate point. I gave it up. Even so banal a request, usually from some nice old lady, that I draw "a nice picture of Santa Claus" or something like, could have unforeseen consequences. I tended then and now to draw from models. Seems most elderly ladies don't specially like seeing themselves rendered in pencil with a beard.

But the collaboration above came about when my immediate supervisor and friend took me aside from the desk one day to talk to me. Usually when this happens, the poor woman has to remind me, yet again, to punch back in from lunch more often, or tell me that "it is not bookstore policy" to call the biggest of our corporate competitors "Satan," or to suggest that someone looking for more titles from Glenn Beck might "have better luck in the suburbs." Bless her kind heart, my friend must occasionally find working with me a trial, yes? And yet she is game to find things still that we can do together. This has resulted in some very good readings, I must say. This time, it resulted in a doodle. She ran a couple of ideas by me. She herself is an artist, a painter, with a deliciously subtle and expressive technique that she uses mostly to produce startlingly beautiful small paintings, wonderfully graphic, of swimmers and water and flowers and all sorts of things I could never make. She wanted me to draw her a doodle of "a self mockingbird" because it's a clever idea that she said would take her far too long to do. Quite right. She is a most deliberative artist. I'm speedy. That may be my chief virtue as amateur. So I drew her a cartoon. Made us both happy.

It also resulted in a flurry of other birds on scratch-paper at the Information Desk; a cardinal in full clerical robes, a depressed bluebird, etc. Delightful.

Try it, it can be great fun, with the right collaborators.
Posted by usedbuyer 2.0 at 11:59 AM