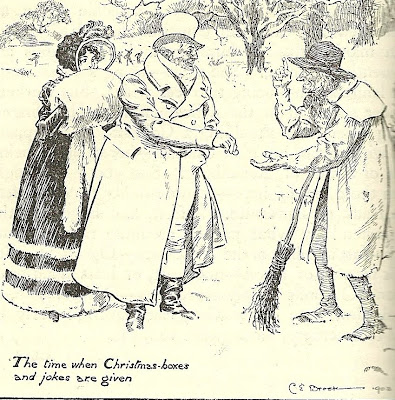 Close the shutters, and draw the curtains together, and pile fresh wood upon the hearth! Let us have, for once, an innocent auto de fé. Let the hoarded corks be brought forth, and branches of crackling laurel. Place the wine and fruit and the hot chestnuts upon the table. And now, good folks and children, bring your chairs round to the blazing fire. Put some of those rosy apples upon your plates. We'll drink one glass of bright sherry "to our absent friends and readers," and then let us talk a little about Christmas.

And what is Christmas?

Why, it is the happiest time of the year. It is the season of mirth and cold weather. It is the time when Christmas-boxes and jokes are given; when mistletoe, and red-berried laurel, and soups, and sliding, and school-boys, prevail; when the country is illuminated by fires and bright faces; and the town is radiant with laughing children. Oranges, as rich as the fruit of the Hesperides, shine out in huge golden heaps. Cakes, frosted over (as if to rival the glittering snow) come forth by thousands from their summer (caves) ovens: and on every stall at every corner of every street are the roasted apples, like incense fuming on Pagan altars.

And this night is Christmas Eve. Formerly it was a serious and holy vigil. Our forefathers observed it strictly till a certain hour, and then requited their own forbearance with cups of ale and Christmas candles, with placing the yule log on the fire, and roaring themselves thirsty till morning. Time has altered this. We are neither so good as our forefathers were—nor so bad. We go to bed sober; but we have forgotten their old devotions. Our conduct looks like a sort of compromise; so that we are not worse than our ancestors, we are satisfied not to be better: but let that pass. What we now call Christmas Eve--(there is something very delightful in old terms: they had always their birth in reason or sentiment) was formerly Maedrenack, or The Night of Mothers! How beautifully does this recall to one's heart that holy tale--that wonderful nativity, which the Eastern shepherds went by night to gaze at and adore--

(It was the winter wild,
When the heaven-born child
All meanly wrapp'd in the rude manger lay;)

a prodigy, which, had it been invention only, would have contained much that was immaculate and sublime; but, twined as it is with man's hopes and fears, is invested with a grand and overwhelming interest.
But to-night is Christmas Eve, and so we will be merry. Instead of toast and ale, we will content ourselves with our sherry and chestnuts; and we must put up with coffee or fragrant tea, instead of having the old Wassail-bowl which formed part of the inspiration of our elder poets. We were once admitted to the mysteries of that fine invention, and we respect it accordingly. Does any one wish to know its merits? Let him try what he can produce, on our hint, and be grateful to us for ever. The "Wassail-bowl" is, indeed, a great composition. It is not carved by Benvenuto Cellini (the outside may--but it is not material), nor shaped by Michael Angelo from the marble quarries of Carrara; but it is a liquor fit for the lips of the Indian Bacchus, and worthy to celebrate his return from conquest. It is made--for, after all, we must descend to particulars--it is made of wine, with some water (but parce, precor, precor!) with spices of various sorts, and roasted apples, which float in triumph upon its top. The proportions of each are not important--in fact, they should be adapted to the taste of the drinkers. The only caution that seems necessary is to "spare the water." If the Compositor should live in the neighbourhood of Aldgate, this hint may be deemed advisable; though we mean no affront to either him or the pump.

One mark and sign of Christmas is the music; rude enough, indeed, but generally gay, and speaking eloquently of the season. Music, at festival times, is common to most countries. In Spain, the serenader twangs his guitar; in Italy, the musician allures rich notes from his Cremona; in Scotland, the bagpipe drones out its miserable noise; in Germany, there is the horn, and the pipe in Arcady. We too, in our turn, have our Christmas "Waits," who witch us at early morning, before cock-crow, with strains and welcomings which belong to night. They wake us so gently that the music seems to have commenced in our dreams, and we listen to it till we sleep again. Besides this, we have our songs, from the young and the old, jocose and fit for the time. What old gentleman of sixty has not his stock--his one, or two, or three frolicksome verses. He sings them for the young folks, and is secure of their applause and his own private satisfaction. His wife, indeed, perhaps says "Really, my dear Mr Williams, you should now give over these, &c."; but he is more resolute from opposition, and gambols through his "Flowery Meads of May," or "Beneath a shady bower," while the children hang on his thin, trembling, untuneable notes in delighted and delightful amaze.

Many years ago (some forty-one--or two--or three) when we were at home "for the Christmas holidays," we occasionally heard these things. What a budget of songs we had! None of them were good for much; but they were sung by joyful spirits, amidst fun and laughter, loud and in defiance of tune, and we were enchanted. There was "Bright Chanticleer proclaims the dawn," and "'Twas in the good ship Rover," and "Buy my matches" (oh! what an accompaniment there was with the flat hand and the elbow), "The lobster claw," and others. We should be sorry to strip them, like "Majesty" in the riddle, of their merit first and last (our recollection) and reduce them to "a jest." Yet they were indeed a jest, and a very pleasant one. Of all the songs, however, which become a time of feasting, there is none comparable to one written by Beaumont and Fletcher. It is racy, and rich, and sparkling. It has the strength and regal taste of Burgundy, and the ethereal spirit of champagne. Does the reader wish to see it? Here it is: the words seem floating in wine.

God Lycaeus—ever young,
Ever honour'd, ever sung;
Stain'd with blood of lusty grapes,
In a thousand lusty shapes,
Dance upon the mazer's brim,
In the crimson liquor swim;
From thy plenteous hand divine
Let a river run with wine!

What a rioter was he that wrote this! His drink was not water from Hippocrene. His fountain flowed with wine. His goddess was a girl with purple lips; and his dreams were rich, like the autumn; but prodigal, wild, and Bacchanalian!

Leaving now our eve of Christmas, its jokes, and songs, and warm hearths, we will indulge ourselves in a few words upon CHRISTMAS DAY. It is like a day of victory. Every house and church is as green as spring. The laurel, that never dies--the holly, with its armed leaves and scarlet berries--the mistletoe, under which one sweet ceremonial is (we hope still) performed, are seen. Every brave shrub that has life and verdure seems to come forward to shame the reproaches of men, and to shew them that the earth is never dead, never parsimonious. Then, what gay dresses are intermixed--Art rivalling Nature! Woe to the rabbits and the hares, and the nut-cracking squirrels, the foxes, and all children of the woods, for furriers shall spoil them of their coats, to keep woman (the wonder of creation) warm! And woe to those damsels (fair anachronisms) who will not fence out the sharp winter; for rheumatisms and agues shall be theirs, and catarrhs shall be their portion in spring. But, look! what thing is this, awful and coloured like the rainbow--blue, and red, and glistening yellow? Its vest is sky-tinctured! The edges of its garments are like the sun! Is it

--A faery vision
Of some gay creature of the element,
That in the colours of the rainbow lives,
And plays i' the plighted clouds?
No--it is the Beadle of St ---'s! How Christmas and consolatory he looks! How redolent of good cheer is he! He is a cornucopia--an abundance! What pudding-sleeves! What a collar, red and like a beaf-steak, is his! He is a walking refreshment! He looks like a whole parish--full, important--but untaxed. The children of charity gaze at him with a modest smile, the straggling boys look on him with confidence. They do not pocket their marbles. They do not fly from the familiar gutter. This is a red-letter day; and the cane is reserved for to-morrow.

London is not too populous at Christmas. But what there is of population looks more alive than at other times. Quick walking and heaps of invitations keep the blood warm. Every one seems hurrying to a dinner. The breath curls upward like smoke through the frosty air; the eyes glisten; the teeth are shown; the muscles of the face are rigid, and the colour of the cheek has a fixed look, like a stain. Hunger is no longer an enemy. We feed him, like the ravenous tiger, till he pants and sleeps, or is quiet. Every body eats at Christmas. The rich feast as usual; but the tradesman leaves his moderate fare for dainties. The apprentice abjures his chop, and plunges at once into the luxuries of joints and puddings. The school-boy is no longer at school. He dreams no more of the coming lesson or the lifted rod; but mountains of jelly rise beside him, and blanc-mange, with its treacherous foundations, threatens to overwhelm his fancy; roods of mince pies spread out their chequered riches before him; and figures (only real on the 6th of January) pass by him, one by one, like ghosts before the vision of the King of Scotland. Even the servant has his "once a year" bottle of port; and the beggar his "alderman in chains."

Oh! merry piping time of Christmas! Never let us permit thee to degenerate into distant courtesies and formal salutations. But let us shake our friends and familiars by the hand, as our fathers and their fathers did. Let them all come around us, and let us count how many the year has added to our circle. Let us enjoy the present, and laugh at the past. Let us tell old stories and invent new ones--innocent always, and ingenious if we can. Let us not meet to abuse the world, but to make it better by our individual example. Let us be patriots, but not men of party. Let us look of the time--cheerful and generous, and endeavour to make others as generous and cheerful as ourselves.

This was written by Lamb for the London Magazine, published in 1822, and reprinted in Volume IV, Essays & Sketches in The Works of Charles Lamb, edited by William MacDonald. The illustration, copied from that edition, dated 1906, is by Charles E. Brock.
Posted by usedbuyer 2.0 at 5:23 PM