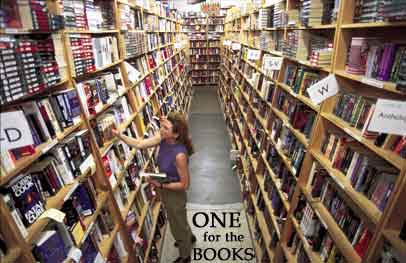 I have a friend, about as good a Catholic, in his way, as he is a tap-dancer, who none the less has been repeatedly on pilgrimage, to one holy place after another. He is an accomplished traveler, a devoted hiker, and a sociable fellow, so even when walking off time in Purgatory, let's just say sin is never far from his thoughts, or kept entirely out of his sleeping-bag. (As I remember it, sin is most often Spanish.) I can not say I will ever understand walking to any purpose beyond arriving, and by no means, at either salvation or even a higher purpose. More likely, for me, would be lunch. Like many a fat, lazy sensualist before me, I prefer pleasure to drop into my lap, -- be it a boy, baked goods, or a book. But if I once went, before marriage to a good cook, no small distance, and might go some small distance still, for either of the first two, experience shows I will go much further for the last. The idea of ambulatory meditation then is not completely beyond my godless ken. I will travel great distances, walk many a dusty aisle, kneel, bow and stretch my arms up to heaven, so long as I am in the presence of good books. Ever the materialist though, I have a well established prejudice against public or institutional libraries; the rule is too strict, the discipline foreign to me, and the reward too ethereal. My bibliophilia is too materialist a devotion for such abstract edification. As a reader, as a communicant, I am very low church indeed, preferring my instruction to be without mediation, my contemplation private. I distrust the doctrine of transubstantiation even as to books. Any book I love, must be mine that I might know its mysteries. I'll have no librarian's priestcraft, thank you, or trust that I may take communion only at some consecrated table in a temple. Better my armchair, in my house.

My pilgrimage then is mapped from bookstore to bookstore. (I've visited such cathedrals even as the Library of Congress with an awed resentment, suspicious of the Romish pomp, respectful of the preservation of artifacts, but distrustful of the privileged access, and the actual utility of books more dusted and recorded than read. I've known many a librarian to recommend trash before treasure, and many a library that has discarded the rarest gold, to make space for baubles, bangles and bunk.) I've been know to give directions to even the least bookish destinations with bookstores as my only landmarks, as these, with good taco stands, are often the only reason I've had to venture abroad in even the cities where I've lived for years. When asked if I'd been, while in Portland, to a great museum there, a favorite of a friend, I had to admit, the idea had never crossed my mind. Not with Powell's just a block from my favorite hotel there, it being my favorite hotel, of course, because it is just a block from Powell's.

To any not lucky enough to have been, Powell's City of Books, is a Portland, OR institution. Established in 1971, by the father of Michael Powell, after working one summer in his son's shop in Chicago, what started in a storefront, has grown into a bookstore full worthy of the boast in its name. I have been in great bookstores in many places. I have walked all the floors of The Strand in New York. I have been even to London's Charring Cross. Powell's is the equal of any bookstore I have been lucky enough to be in.

Beyond its size, and it's perfect blend of new, used and bargain books, it is besides a place respectful of every preference and purse. I might admire a rare edition of Lamb, or a rare volume, beautifully made, of Cowper's poems in the Rare Book Room -- as close as I'll ever come to owning such a book -- but I might also, as I did, buy a homely, stout and sturdy edition of Cowper's poems, from open shelves, in the poetry section, for all of eight dollars. From Powell's, in fact, I have my copies of Lamb's letters, and Thackeray's, and my Complete Waverley Novels of Sir Walter Scott, retrieved for me, and the dust blown off, from a kind young clerk in a suburban branch of the company. Much of my Dickensiana I had from Powell's, purchased online from their simple and efficient website. For none of these, or any of my many treasures gathered from their stock, have I paid anything more than a fair price. For much of what I bought from Powell's, I paid considerably less than I might have anywhere else.

It is then this for which I am most grateful to Powell's: that I might come to them, as I've just done this past weekend, and in as many hours as my feet would let me, I might not only walk among great books, but walk out with them, and still have the means to make a good supper.

This latest trip brought me much I am still astonished to have found, and found I could afford! Books on Johnson, and a book on Mrs. Thrale, two books by James Agate, the great British theatrical critic, a great fat volume of the Best Loved Story Poems, dating from the mid-century-last, and Lamb's Specimens of English Dramatic Poets Who Lived About the Time of Shakespeare, perhaps among the few books by Lamb I've never owned. In all, I came away with three bags full. Quotations already begun, and more to follow.

When I go to Powell's, when I take friends, always at their request, for the place may deserve but does not require my evangelizing, I am mindful always that such rare places are not often afforded the respect so unthinkingly paid, most often from complete ignorance of their contents or conduct of business, to even the most pedestrian or pawky public libraries. The snobbery that persists in seeing honest business as somehow inferior to the apparent, if hemmed and hobbled democracy of publicly funded institutions is perhaps the last vestige, ironically, of the old oligarchical disdain of commerce. The great libraries, after all, have most often been founded as much as monuments to the bloodiest of barons and the worst bastards in history, as reserves of learning, and the least and greatest, the newest and the oldest extant, are still funded, at least in part, by the charity of bored belles and dead collectors in hope of a secondhand immortality, and by the basest of political and bureaucratic populism -- near ev'body likes a library, on principle, even with no one in it. Independent bookstores, great and small, and booksellers, I would argue, have supported more genius, and provided even the least proud with more beloved books, than all the libraries in this country's history. Lincoln may, of necessity, have borrowed his first books, but the first thing he bought as soon as he earned the money to buy them, were the books he loved. No great man, or humble reader, ever died regretting the books he had in delinquency from a public library. It is the book I buy, to read and reread at my pleasure, that comes nearest to being mine.

I owe far more than I've ever paid, to Powell's Books. My means are not equal to my admiration, anymore than they can ever satisfy my acquisitiveness, though I do what I can with what I have. I send this poor valentine then, against my bill.
Posted by usedbuyer 2.0 at 2:06 AM