Enemies and Friends of Sam 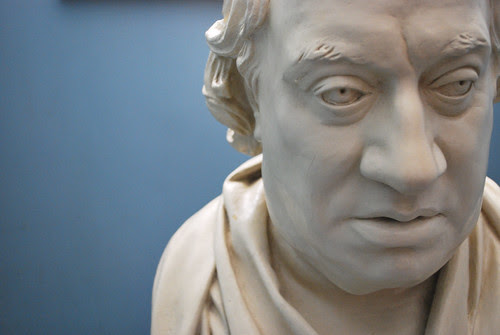 Among my purchases from my last raid on Powell's in Portland, I came away with with Peter Quennell's beautifully illustrated book, Samuel Johnson: his friends and enemies. Published in 1973, by American Heritage Press, this is yet another of those lovely picture books, quite popular at the time, that consist of well edited and annotated reproductions of art and portraiture of the period reviewed, with what really is more a series of related essays on the subject, than a biography, by a popular scholar of the day. I dearly love these books. Before computers really revolutionized publishing, and color reproduction, the making of these handsome tribute volumes to the established greats of English and American literature and art, must have been a rather difficult and time-consuming business. Think of the necessity of accessing, collecting and securing the rights to reproduce drawings, caricatures, paintings, illustrations, newspapers, manuscripts, photographs of the homes and the keepsakes, the few surviving odds and ends from a particular author's life, and doing so from the collections of museums, universities, libraries and private collections, without the aid of any search engine, database, or online bibliography. Yet, for whatever reason, for a happy period in the late sixties through the middle seventies, so far as I can judge, publishers in the UK and America produced volumes just like this on Twain, Austen, Lamb, Kipling, Dickens, and on and on.

The abundance of illustration throughout the text, and the regular use of color illustration -- though sparing by today's standards -- made these books expensive for the time, further limiting what must already have been a fairly limited audience. The writers hired to provide the text, and who, in some cases I think, even edited and provided the captions for the pictures, were consistently popular authors themselves; critics and biographers like Quennell and David Cecil (who did books just like this on Austen and Lamb,) or novelists like Kingsley Amis, who did a volume on Kipling. In some cases, a famous name, like Margaret Drabble, would edit such a volume, as she did The Genius of Thomas Hardy, providing an introduction, and presumably approving the rest of the text, which consisted then of scholarly essays, each by an invited academic, on a particular period or aspect of the novelist's life or work. The commemoration of a centennial of an author's birth, or death, might provide the perfect opportunity or excuse for such a book, or, as was the naturally the case with the centennial of the death of Charles Dickens, any number of such illustrated biographies, by one or many hands.

Peter Quennell was a popular and established critic, who had started his career as something of a poet-prodigy as early as 1922, being published while still a student at Oxford. By 1973, when he published this book on Johnson, Quennell had already written often and well about many of the major and minor literary and historical personages in 18th and early 19th Century England. Over the years, I've come to trust Quennell the historian and critic, and have read and come to own probably a dozen books either written or edited by him. His biography of the young Alexander Pope, for instance, helped me enormously to understand and appreciate the poet when I was, rather desperately, trying to catch up enough with the studies of a friend who was, at the time, writing about Pope's "Essay on Man." (I don't know that I ever became sufficiently well versed in the subject to quite follow my friend's academic arguments, but I am still grateful for push he provided me to the poetry of Pope.)

Reading Quennell's Samuel Johnson; his friends and enemies, I find Quennell did not actually much like the Doctor, and while I would not class him among Johnson's "enemies," this book hardly puts him among Johnson's "friends," either. This is dissapointing. Quennell seems to accept every mid-Twentieth Century, liberal cliche about Johnson's personal and literary ponderousness, dismissing, for instance, most of the popular essays from The Rambler, The Adventurer and The idler as being unread if not "now" unreadable. Yet Paul Fussell, in easily the best book on Johnson's style I've ever read or am likely ever to read, Samuel Johnson and the Life of Writing, had, as recently to Quennell's book as 1971, already demolished much of the accepted, negative critical opinion of the time about these great essays, and re-established, I think, Johnson's proper place in English literature. (Fussell's book does not appear in Quennell's bibliography.) I think it safe to say that Fussell's estimation has proved to be the more accurate and lasting reading.

Whatever my disappointment with Quennell's somewhat lazy reading of Johnson, his book still has value for me, and I'm glad I bought it, and read it. If I keep it in my library for no other or better reason than the wonderful illustration, I am entirely satisfied.
Posted by usedbuyer 2.0 at 11:20 PM