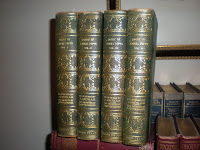 When I first read Boswell's Life of Samuel Johnson, it was in an edition perhaps best described as a concert Johnson. I don't own the edition anymore, having long since upgraded my copy, so I can not make direct reference to the text, but what I can remember of my first Boswell is that it presented itself not as an abridgment, but as The Life itself, only "edited and annotated for the modern reader." I knew no better and assumed the epithet. I was even naive enough to think I was being done a favor. As it turned out, the editor's Samuel Johnson was certainly not James Boswell's. The editor's Dr. Johnson was a soloist, and roaring old bore. He had no friends, only an audience. He never had a conversation, or even a duet, only arias. His every utterance began with "Sir," and that comma was his only visible breath thereafter. He bellowed. He boomed. He intoned. He trilled. He bowed. He encored. He never got off, but to come back on. My first impression then of Johnson, in so small a space, was that he just seemed... loud. Boswell was reduced to prompter. The editor took on the accompaniment, in footnotes that sometimes drowned even Johnson out for pages at a time. (As in any voice recital, the last thing one comes to hear is the piano player.)

The concert Johnson then, specially for a novice, was not a success. It was many years before I took up a better, older Boswell -- unexpurgated, unabridged, annotated but without exegesis -- and was again, this time properly, introduced to both biographer and subject. Their friendship then, and respective personalities and genius, came as a revelation. Boswell, and Johnson, needed nothing from "the modern reader" but time and an attention too seldom given nowadays, and from an editor, nothing but what he could add rather than excise. I've read the real book twice through, and will again. And because of Boswell, I've read Johnson, and Goldsmith, and the poets from Johnson's "Lives," and Macaulay, and Walter Jackson Bates, and G. Birbeck Hill, and and and...

And now I come to my new Pepys. I learned from recent biographies of Johnson, that some of the old fellow's more colorful moments, if not altered to protect his dignity by Boswell, were altered by the subsequent editors of Boswell. Not a lot of blue pencil, you understand, just the occasional "tit" or "bubbies." Then there's Pepys. Samuel Pepys has proved to be among, if not the most messed about of English classics. His own fault, in a way, as he wrote his diaries in a shorthand, only "deciphered by J. Smith, A. M." long after. And then the long line of editors set to.

My first Pepys wasn't even Pepys, but Arthur Bryant's biography in three volumes. (I want those again.) Lovely stuff. My first actual Pepys was a slim selection by Modern Library, still, I think, in print. Now that really was, and presumably still is, just a book of quotations. Still, unlike my first Boswell, my first Pepys was not a bad thing. As a diarist, Pepys is Pepys, even in small doses. It isn't a distortion to sample individual entries and reprint just these. Such a book isn't Pepys' Diary, but it didn't make any such claim, as I remember it, the editor being careful to say he meant the little book to wet the reader's appetite, nothing more. From thence, years later, appetite up, to The Shorter Pepys, edited by the great 20th Century Pepys scholar, Robert Latham. I would recommend this to anyone interested, even in the bulky hardcover I own, as still the best one volume edition likely to ever be. For a long time now, Latham's abridgment, was my Pepys. So far as I know, Latham's 11 volume edition, which I've never undertaken, and have no plan to, is considered definitive... for now.

That's the thing about Pepys, it seems there has always been enough there to keep the editors busy. This is as much a tribute to Pepys as it is to the difficulties of his shorthand. Samuel Pepys recorded a remarkable range of experience in his diaries: from Court and the King, to street life in London, politics and pie, work and sex and conversation and, most remarkably, himself. Fascinating stuff, as history, and as the record of a congenial personality and a busy life.

Not too long ago though, I found a nice 3 volume edition from J. M. Dent & Sons, "edited from Mynors Bright." First published in 1906, "revised and reset in 1953," my copy is from 1958. Now, a lot has happened to Pepys since 1958, and Robert Latham may be about the best thing to ever have happened, but dear old Mynors Bright was no slouch, and the Everyman's Library made handsome little books, suitable for travel, unlike Latham's Shorter Pepys, which would tax a pack mule's endurance after a mile. I figured the Edwardian Pepys should just about do me fine.

Then across the buying desk one day, we got a beautiful old "Edition Deluxe," in four volumes, undated, in quarter leather, tatty and in need of repair, of The Diary of Samuel Pepys, with a Life and notes by Lord Braybrooke. After I'd glued them a little to make the books readable, I decided I needed this Victorian set as well. They are pretty things, and the type is big and readable.

So now I have two sets of old Pepys, in which the scholarship is doubtless not a patch on the definitive Latham, but the latter 20th Century didn't know everything about making a book. The notes in my two new sets are sometimes utterly unhelpful -- being more concerned than is actually helpful with descendants and titles, and sometimes little else. But this last set specially is still a lovely old thing; all gilded lettering and crumbling leather, creamy pages and bold black type, and it looks so grand, and feels so wonderful in my hand, I couldn't resist it. Now I've read fifty pages of diary, and the short life, etc., and I must admit, this is for now at least, my Pepys.

I don't doubt there may be others, but I am content for now with mine.
Posted by usedbuyer 2.0 at 1:59 AM