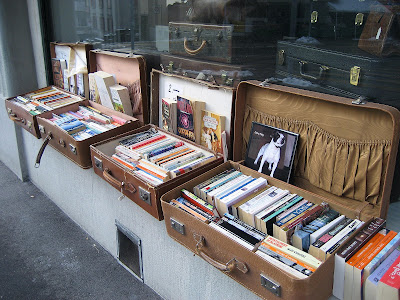 From Over Bremerton's, by E. V. Lucas

“’The prices,’ she said, ‘are marked just inside. They are all net, but if any one bought several books you might knock something off. Don’t ever knock anything off a cheap book.’
‘Be very careful,’ she said, ‘with people who look at the illustrations. Sometimes they pinch the plates.’
‘Whatever you do,’ she said, ‘don’t buy any books.’
‘Keep an eye,’ she said, ‘on the outside shelves.’
‘Don’t let any one,’ she said, ‘stand too long reading.’
‘See that they don’t slip one book into their pocket while they buy another,’ she said.
‘Watch them,’ she said, ‘to see that they don’t rub out our price and put in another themselves.’
That, I think, was her very last counsel. I sank down in a chair in a kind of stupor. I had not been prepared for such revelations of perfidy. I had thought of a second-hand bookshop as being off the main stream of human frailty and temptation; and behold it was the resort of the most abandoned! Is there no natural honesty?”
Posted by usedbuyer 2.0 at 11:45 PM