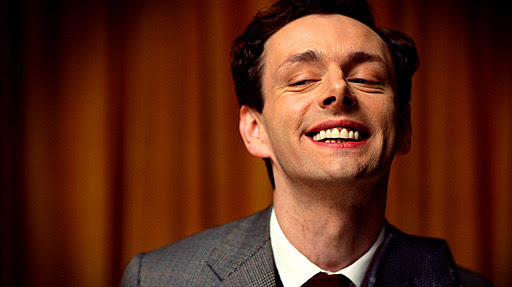 As we left England, fifteen years ago or so, after our only trip to date, I picked up a couple of last books in the airport. Now, I'd already shipped a box of books home, and my suitcase, when we came through U. S. Customs later, caused some consternation when I hefted it up on the counter. Thud. When told that books accounted for the unusual weight -- one could do such things back then without additional fees -- the Customs officer gave me a most skeptical look. We'd also been to Amsterdam, you see, so I wasn't surprised when he starting thumbing through each book, no doubt thinking that in one of them at least he was going to find a brick of hashish. He didn't, of course. Just books. Many, many books.

"Guess you like to read?" said the bewildered American Customs man.

The books purchased at the airport, just to read on the long, long, flight home, I bought just because they were so obviously, completely English. Both were celebrity paperbacks. Robert Morley had died not long before. His son, critic Sheridan Morely, I think it was, had written a biography. I read that first. Robert Morley, in all his glorious orotundity, in addition to being an instantly recognizable, and reliably brilliant, character actor, had a well-earned reputation as a raconteur. I haven't seen the book since, but I remember laughing out loud while I read it. Lovely man.

The other paperback I bought that day was by another English comic actor, one with whom I was at the time considerably less well acquainted. I don't know that I'd ever seen his movies, or television appearances, or heard any of his radio shows. In fact, I don't know that I'd ever really heard of Kenneth Williams before I bought his Diaries that day. I think I must just have trusted the jacket copy, which spoke to his great wit, and to the fact that Williams had been a friend to Joe Orton, whose life and work fascinated me, and whose own diaries I'd fairly recently read. I suspect I bought Kenneth Williams diaries because Orton was in them.

Williams had dies some years before, in 1988, quite possibly by his own hand -- the coroner declaring "an open verdict" on his overdose from barbiturates -- and his diaries had been published posthumously, to considerable controversy. He'd kept a diary nearly all his adult life, right up to the day he died. In addition to the often waspish private judgments passed therein on fellow actors and celebrities, Williams' diaries were a record of his most private reflections on his own, quite painfully chaste, homosexuality. Reading his diaries on that plane-ride, I discovered that Williams was an amazingly erudite, and funny man, as well as quite a eloquent critic, and a touchingly unhappy person.

Subsequently, I have watched and listened to quite a bit of Kenneth Williams, thanks largely to the Internet, and Youtube.com specifically, and while I don't know that I will ever quite describe myself as a fan of the "Carry On" movies in which he made his greatest fame, I am most certainly now a firm fan of Kenneth Williams. Brilliant chat show guest. Outrageous performer. Williams himself, in his diaries at least, could be quite dismissive of the broad burlesque of those pictures, but I will say, having rented and watched a number of them from the great Scarecrow Video, here in Seattle, the best in all of the ones I've seen was always the surreal camp of Kenneth Williams and Charles Hawtrey. I can honestly say, I never saw the like. Beyond stereotypical, these queens raved and shrieked through low comedy after low comedy, and in Williams case particularly, did it at such an insanely fast, and funny pace as to slip the surly bonds of earth entirely, winging into the highest constellation of camp stars. Williams voice was a most remarkable instrument; capable of drawling a sneer out to impossible lengths, rocketing from impossibly plumby depths, to a pitched cockney squeal that broke the sound barrier. He could wring a laugh out of the worst joke with just the flair a nostril, or a jerk of the jaw, and he made a high art of eye-rolling. I've never seen a queen behave so archly on film, and yet be, always, somehow, endearing.

Home tonight, sick again with, if not the Swine Flu, something certainly no less swinish, I watched a remarkable BBC television film, staring the brilliantly adaptable Michael Sheen, as Kenneth Williams. Kennith Williams: Fantabulosa! is yet another of those BBC bio-pics that, on what appears to be a quite limited budget, manages to be both literate, accurate, and briskly entertaining. Passing artfully between scenes of the painful isolation of Williams' antiseptic private life, as detailed in cleverly acid voice-over quotations from the melancholy chronicles of Williams' Diaries, and set pieces from his career in comedy, the portrait is equally funny and moving. The script is a wonderful thing, but it is the performance of Michael Sheen as Williams that provides the depth of feeling. The imitation, specially of Williams remarkable voice, is spot on, as is the recreation of his public persona -- capturing every nuance of eagerness to be loved in even Williams' most hysterical waspishness, in every filthy if harmless hint of queer superiority to every dirty joke. Sheen uses all of Williams stock phrases and bits of business, but to a purpose beyond straightforward imitation, as a means of exposing the panic and fury that always threatened to make Williams unemployable and which kept him from exploring even the few opportunities for genuine connection with another man that he allowed himself. Approached in a cruising park, Sheen as Williams thrills to the touch of a stranger's hand on his knee, but then immediately resumes the mask of the harmless old poofter, and jokes about the weather. Sheen never lets an opportunity slip to show that even the famous laugh, for instance, came dangerously close to being a scream. It is a performance Williams himself might well have found shocking, even embarrassing, but which does him great honor in finally reconciling, in a way the man never could himself, the donnish, tortured queer intellectual of the diaries with the camp entertainer who endeared himself to millions with his masterful, and merciless command of every inflection and gesture in public. At moments of specially vulnerability, Sheen's jaw twists and his head lolls back on his long neck, as if in anticipation of a blow. It is a pitiable response to what, just as likely, might have been a kiss.

I don't know that I could read those diaries again, having watched Sheen's performance, without wishing, as Williams' friend Orton does in the film, that Our Ken might have had "a good fuck" now and again, just to know he could, without hopelessly damaging himself or losing the only love he really came to count on, from his audience. Sad, that. He might have been as happy as he made all of us.
Posted by usedbuyer 2.0 at 11:54 PM