I am no great enthusiast of children's books, as branch of business; there is more that is worthless, ugly, insipid, insulting and stupid published every year under this forgiving rubric than is produced annually by the all the rest of publishing combined. Amateur watercolorists, unemployed movie actors, crackpots, missionary societies, municipal functionaries, and chimpanzees; there is literally no semi-sapient population seemingly without credential to pen or paint or digitize some little book, however half-assed, and see it through to publication, so long as the result may be pitched at the heads of unsuspecting persons standing under average adult height. If a poem does not scan, but rhymes, if a novel is underwritten, but earnest, if a drawing is crudely executed, but of a bunny, and in bright chalks, then the results, if fit for nothing else, may be said to have the makings of a book for children. It is all but impossible, it seems, to convince anyone without the least talent that the little they imagine themselves to have is not sized just right for undeveloped minds, or to assume such idiots will not find like-minded publishers to float such flotsam in the flood that now comes not just at Christmas, but flows throughout the year. Almost every publisher's catalogue, however unlikely the specialty, however otherwise not the stuff of children's reading, comes now with addenda: "for the little mechanical engineer," or "for the junior skeptic," or "the lives of the disemboweled martyrs, made wholesome for the littlest Christians."

Even the best of what passes through the buyer's hands and into the bookstore, can only hope to rise and be plucked from the torrent before sinking. There is just too much: too much that has no function beyond the promotion of toys, and television shows, too much that exists for no reason but to promote or retrieve celebrity, advance agendas, amuse adults, inculcate dogmas and or earn a dishonest dollar. Charles and Mary Lamb complained, two hundred years ago, while making their Tales from Shakespeare, that the market of books for children was already so loaded with such cheap and gaudy trash that they nearly despaired. (Bless them that they didn't.) Nothing since has changed, if not for the worse, in terms of volume.

For some slight thing, told first as an amusing anecdote, to distract an unhappy mind from dark piety, and then made from that story into a light and lasting little poem by this same sad poet, for such a thing to survive, inspire great illustrators, and to delight generations of children, is something almost miraculous then.

William Cowper, (pronounced Cooper,) 1731 – 1800, was a good and genial poet, a gentle man, but not a happy one. Disappointments undid him, and what we would now call depression, and a deep religion, to which he owed much of his happiness, and most of his brightest invention, made all the torments of Hell but only too real to him. Periodically, he went mad. Once, to stave off yet another decent, a dear friend told him a true story: of a respectable draper, remembered now only as John Gilpin, from Cowper's poem, who losing control of his horse, lost his hat, his wig, his cloak, his wine and his way and was mistaken by cheering or chasing crowds along the way for a bandit, a mop, and a man with a bet he intended to win by racing like mad, right past the place he intended to go. The story worked. Cowper laughed. That night, now to amuse his friend in turn, Cowper made of the story a poem, The Diverting History of John Gilpin, later published in a book of Cowper's poetry. From there the poem passed into popularity, eventually finding, in Randolph Caldecott, one of the first great English illustrators of children's books, and the man for whom the Caldecott Medal was named, an artist to equal Cowper's invention. (It is an illustration from Cowper's poem, engraved on the Medal.) Generations of children have giggled at the ruined dignity of the respectable gentleman, undone by his horse. 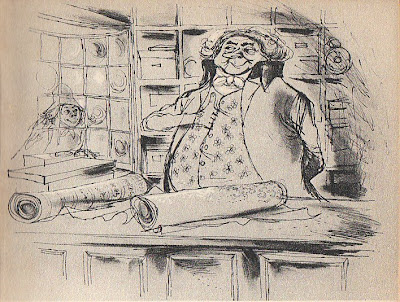 Today we got a little book from the bottom of a box. The jacket was torn and dirty, the edges stained. Published in 1954, this edition of Cowper's poem was illustrated by the great Ronald Searle. I'd never seen it before. It made me laugh. There was perhaps no better cartoonist when it came to injuring dignity, no pen in the middle of the last century, better suited to put poor John Gilpin back on that furious horse.

Like all the best children's books, written for children or no, what will and ought to last, as Cowper's little poem has, is what has a right, independent of instruction, cant and commercial exploitation, to be claimed as fit and fun, for children and any others wise and lucky enough to find it, even at the bottom of a box of otherwise undistinguished books. I'd no idea what this little book was, before something made me fetch it out again from the box into which it had already been returned. Happy chance.

Plucked from the flood, another soul saved from perdition, good William Cowper has been lucky in his friends. How lucky was I to find him today?
Posted by usedbuyer 2.0 at 10:40 PM