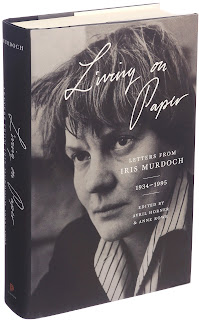 From Living on Paper: Letters from Iris Murdoch, 1934 - 1995, edited by Avril Horner and Anne Rowe

"PS: don't misunderstand me about Christianity etc. I'm not being an opium-of-the-people merchant. It just offended me to see journalists who wouldn't dare be frank about homosexuality and who until lately treated the Church as if it were the Royal Family suddenly kicking their heels and making idiotic remarks such as 'this is not really a Christian country' etc. It's like a fish saying it doesn't believe in the sea. We are sunk in Christianity whether we like it or not, not only culturally but morally. Paganism is a privilege of a few."