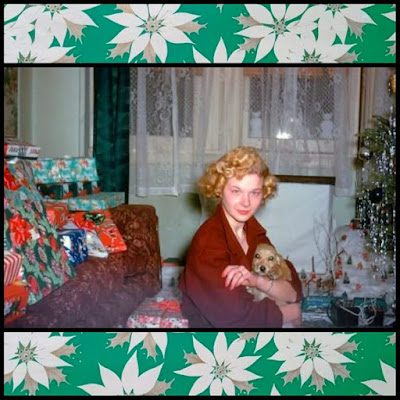 Penny decided to put all four blond falls on before she took her Christmas photo this year. Took some doing since that pixie-cut she gave herself when Georgie left had gone so wrong. Still, "'nothing ventured', as the naked lady said to the mailman," she said to Mr. Sniffles. The little dog was of a nervous disposition to begin with. When confronted by the suddenly blond and curly Penny snatching at him behind the sofa, Mr. Sniffles piddled a little on more than one bit of wrapping. "Come on, you little shit," Penny shouted, clutching him to her chest, "the timer's about to go!" She turned into the flash, doing her best imitation of Gloria Grahame. Perfect. Later Penny felt bad for squeezing the dog so hard and poured a spoonful of the good gin over his dinner. "I miss him too, Mr. Sniffle-whiffles," she pouted, "go ahead and piss on that sweater I made him, the bastard. He'll never wear it anyway."
Posted by usedbuyer 2.0 at 12:10 AM