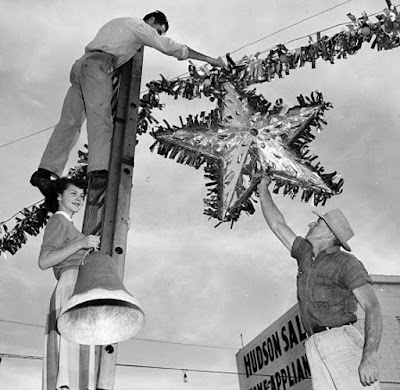 "They sent me up that ladder with the damned bell," Carrie told us later, "wasn't my idea." The photographer from the Yuma Sun always denied he'd done any such thing. However she got there, everybody agreed after about just the two things: 1) Carrie looked real pretty when they printed the picture in the paper, and 2) the additional weight took poor Emmet and the ladder down hard into parking lot. The girl didn't end up with a scratch on her. "Of course it was sweet Lou Hudson who got the worst of it," Carrie said, "when Mrs. Hudson saw that damned picture in the paper and put two and two together. Next thing I knew, that crazy lady drove her Buick through the display window, I was out of a job, and Lou stopped paying the note on my car and I had to move out of the trailer. That," she used to laugh, "was a pretty shitty Christmas all 'round!"
Posted by usedbuyer 2.0 at 9:55 PM