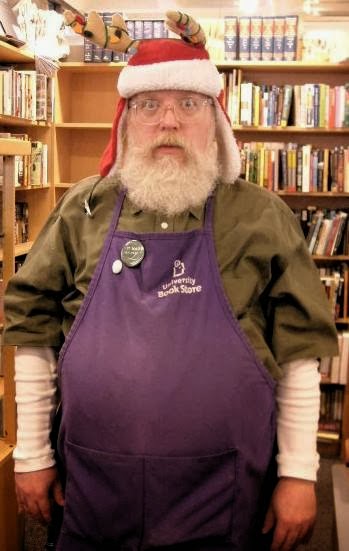 Above would be a portrait of the bookseller as Holiday retailer on Christmas Eve.  Shocking want of cheer, beyond, that is, the hat, obviously.  Truth be told, it's at least felt a very busy, bustling sort of Season; children laughing, people passing, meeting smile after smile and that sort of thing.  (In so humble a position as mine, I am largely spared the cold realities of the numbers.)  Important to remember also that I at least look forward to working in the bookstore this time of year.  I thoroughly enjoy recommending gifts for elderly maiden aunts, reviewing wrapping-paper-options over the phone, finding the one copy of a most unlikely title for a most unlikely present.

Still, by the time it's all nearly done, one does get just the teensiest bit... crispy 'round the edges.  (Though as evidenced by the ever so flattering picture here, still noticeably soft at the center.)

That said, Christmas Eve is quite possibly my favorite bookselling day of the year.  The staff is a bit giddy, not only in anticipation of a paid Holiday, but also I must confess, I do like the somewhat frantic note of desperation that charges the atmosphere with a very special energy on this last day before choices may become regrets and or returns.  (Plus, we close early.  That's always nice.)

A quick review then of my most noted encounters with customers from this abbreviated shopping opportunity:

"Do you have that new book about an old Japanese lady?"  We did.  Turns out, it was a book-jacket described almost accurately, though incorrectly by the person to whom the book was to be given, and that the title for which this individual was actually looking was Jung Chang's new biography, Empress Dowager Cixi: The Concubine Who Launched Modern China.  That took a bit of conversation to get to, let me tell you.  (Excellent book, by the way.  I haven't finished it, but I have been reading in it at lunch-breaks for some time now, and the story is of a far more sympathetic figure than I'd ever imagined, at least as Jung Chang tells it.)

"Do you know how to use a calender?"  I do.  This from a small person of limited experience, one assumes, in such matters.  She had been encouraged by her immediate supervisors to pick out a wall calender as a gift for her grandmother.  She'd made a very nice selection, of something large, with reproductions, curiously, of antique advertisements for liquor, but she could not, for the life of her, figure out how the damned thing worked.  I began to explain the modern calendrical system, but she waved this way.  She understood all that well enough.  What she wanted to know was how to move the calendar from month to month and how to hang the thing.  I demonstrated how the pages turned, and where the hook went over the nail.  She was taken aback at the idea of a nail in the wall -- something she seemed to find vaguely irresponsible -- but otherwise accepted my instruction as fundamentally sound.  (Were I to predict, I'd say the young lady has a future in real estate management.)

"Can you recommend anything for my mother-in-law?"

"Certainly.  What does she read?"

We did find the poor woman some books, by the way.  She will be shocked.