Not in Entire Forgetfulness 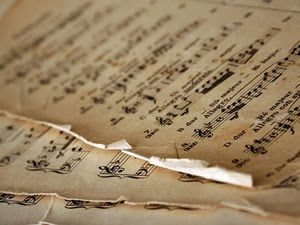 The consequences of the print die-off continue to surprise. Last year the bookstore where I work finally wrote-off a lot of unsold, bound sheet-music, full scores and songbooks. Most of this was Dover and so unreturnable, and some of the stuff was just old and unloved. A lot of these books were oversized and or awkwardly floppy, so their last go 'round was in a big, black bin -- always sad, I think. Little good can come of books in a big, black bin. Mozart and Rossini operas, rockers, piano music, finally, it all just... went. Went pretty fast, at half off. Didn't take long at all to empty the bin.

I can't read music.  It's a damned shame that in my rather spotty education, some time might not have been taken to learn so simple a thing as this.  Perhaps it was tried, I can't remember, but if I ever knew even the rudiments, I have forgot them.  I think now of what pleasure there might be had in following, as I know some friends still do, the scores of Handel and Bach, this time of year.  I won't even let myself consider what it might be like to sing such music.  My singing voice, what there was of it, was at its best before my voice changed and that, my dears, was long long ago.  Still, as someone who spends a good part of his time away from work listening to music, I do rather wish I understood it better, knew at least something of it's mysteries, could follow even it's simplest forms on a page.

Before anyone suggests that there might be no better time for me than the present to correct this failure, let me just say I have made my peace.  I am not a fast study.  I do not take up what seems better left.  No, I may allow myself a bit of sighing here, but no more than that.  It is what it is, my always faulty faculty for learning, and I dare not try it so far as a new language.  (When we took our one trip to Europe, I managed just enough Italian to ask where the WC was, how much something cost, and where to get a bus-ticket.  I understand I have a decent ear for accents, but for actual languages learned, I am grateful to have even such English as I've acquired.)

My point here is a more general one.  Part of what it means to work, as I do in a great general bookstore has for me always been that all around me, whether I had either the need or the notice of it, was the evidence of culture greater than my own.  Do not misunderstand me, this is still the case and I have no intension of reviewing yet again the depredations consequent of changing economic forces in the book business as elsewhere.  Rather, I only make note of this one reduction, this singular loss, to which I have no direct connection, to pose a question:

Where did that music go?

If, as this example would seem to show, all that sheet music did indeed get purchased after it was clearanced away to nothing, who has it now?  Is it in a piano-bench somewhere?  On a bookcase?  in a library?  The books weren't burned or trashed.  Those scores and songbooks ended up somewhere, someone, I repeat, bought the damned things, but who and where are they now?

If no one anymore seemed to come looking for these things, how is it we were able to sell them all so quickly once they'd had their prices halved?

What to conclude from this?  That musicians are poor?  That's as may be.  That the prices of all these things were too high?  That may have been true as well.  The fact remains, there is still an audience for something we were not able to sell, and as a direct consequence of deciding to get all but out of the business of selling such stuff, ironically enough, we seem to have met a need we have not otherwise been able to address.

Seems to me that the evidence, however anecdotal it might be, is all to the side of the good in a strange way.  There may be no good to this story in so far as bookstores are concerned.  We can not, after all, simply sell everything at a price that might appeal.  That would hardly work, even the week's time it might take to go bankrupt.  As for more specialized retailers, when was the last time one saw a music store?  No.  There is no good news in this little story but for whoever it was found all that glorious good stuff in a bin and bought it.  It's that small happiness from which, strangely enough, I take heart.

Nothing, it seems, nothing of real value, ever goes away entirely.  Seems a silly thing to say; too obvious, surely, if true, and possibly not even true at that.  History does not support this theory without at least some qualification.  How many great things, how many whole cultures have disappeared, been erased by conquest and war, devastated by ignorance and superstition, fear and folly?  And yet, with all that.

A friend who'd been to stay with us just this last week and a conversation we had rather in our cups, too late at night, inspired this note.  Without attempting to repeat or reproduce our conversation, just the other day, as I passed the Music section in the bookstore, I was reminded of it.

As might be imagined, we neither of us solved the problem of deciding what is best, let alone of preserving what is best or redressing the losses of mankind that night at my kitchen table.  But my friend, for me represents something very like my reason to hope for the continuation of all good, human things even after he and I are long gone.  He is himself a musician, an instrument maker, an artist, and like artists from time immemorial, he is a bohemian sort of fellow, living very much hand to mouth, and none too sure of his next gig, or even his next meal.  I like to tease him for his somewhat eccentric preference for medievalism and instruments and music made well before the first piano was tuned.  He has learned not to be so easily bullied by the likes of me, and he is quick now to call me out on my Philistine affectations to know anything really on the subject of anything but, to concede to me my little due, Victorian novelists and minor Romantic poets.  (Bless him.  How I do miss his company when he is away.)

I like to think, though it may be no more than sentimentalism on my part, that even such a bull-session as ours keeps at least a spark glowing.  More than that though, and wholly more significant than any nonsense I may ever talk across a kitchen-table or the counter of a bookstore, I like to think that it may well have been someone very like my friend who decided to forgo a meal or two and buy all that glorious, to me indecipherable beauty from that black bin in the bookstore last year.

My friend teaches, you see.  He seldom does so in any very formal setting.  His education, in its way is worse even than mine, but in a more significant sense, his has been infinitely better, as he has taught himself to teach even as he's learned; every time, or nearly every time he plays, or leads plain-song, or makes some masque from nothing, puts on a puppet show of The Book of Job (!) or simply talks to some child or elderly enthusiast of "shape-note", my friend teaches.

I am, to an embarrassingly significant degree, past learning much, even from my friend.  This much however I am confident in having learned from him already.  So long as there are musicians in this world, there will be music.  So long as there are teachers, there will be students.  While what is best and what survives, as he so fiercely insists, may not be always the same thing, he himself proves that something good goes on, if only from individual to eccentric individual, so long as the human race does, "Insha'Allah," as he would say.

I can't pretend that anything I do, selling books, talking about books, boring people, to be honest, often as not about books I'm unlikely to convince many other people to read, will have anything like the same power to continue my enthusiasms on into unseen generations.  I can't worry too much about that.  We do what we can, each in our way.

I do like to think tonight that somewhere in this city, there is someone singing, or playing or simply following a score, had for a song, all but by chance, because it was there, in a bin.

Just as I found a book, once, more than once, in just such a sorry place.  (Was it, Wordsworth, do you think?)

Nothing is lost unless and until there is no one left to find it, no?

Thanks,"Thou, whose exterior semblance doth belie/Thy Soul's immensity" for the reminder.
Posted by usedbuyer 2.0 at 1:26 AM