Something I Do Every Year

How to explain this?  I might natter away about our common, cultural heritage, the omnipresence of Christmas music in the retail environment where I've worked for thirty years, perhaps the nostalgia in which we are all of us awash this time of year, and all of that would be true enough.  For whatever reason though, even as I've rejected supernatural explanations of reality, and embraced with enthusiasm an entirely secular worldview, I can not but admit the fact that as soon as December rolls inexorably 'round each year, out come the Christmas records and until the New Year, I will listen to little else in my private hours.

I simply love the stuff.  Not all of it, off course.  There are certainly songs of the season that even I would consign to forgetfulness if I could.  As a man who makes lists every day and is glad of the slightest pretext for so doing, good or bad, I could as easily offer here what, in my opinion are the worst Christmas records ever; the least attractive renditions of holiday standards, the most overblown orchestrations in support of the flimsiest voices, the most appalling "updates" of the classics, etc.  I won't.  Why spoil the mood?  What I would rather do, if I may -- and who's to stop me? -- is just briefly provide without too much talk, the list of my favorites, here, for any as might want it.  I don't imagine I'll make any converts.  My former work-husband and I used to torture our former work-wife every year by caroling at her as early as October.  This was cruel, of course, specially as we were neither of us singers to begin with, but I confess, I at least did this only half in jest.  Any excuse, frankly.  I've even made the more advanced versions of the ol' "mixed tapes" specifically to share with some as don't much like the stuff.  This list though I offer to anyone already so inclined, with little or no thought to bring any reluctant listener 'round.  It's glorious stuff, but I do understand if it's not to everyone's taste.

Here then, just the five albums I listen to every year, straight through, over and over.  There's no real rationale to this.  This is just the short list, as it stands. 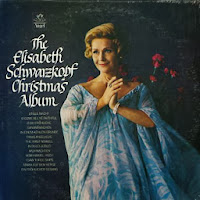 Perhaps the second classical recording I ever bought, The Elisabeth Schwarzkopf Christmas Album dates from I know not now when.  I bought it on vinyl in some charity shop, and eventually replaced that rather worn-out article with a CD as soon as I saw it in the new format.  I still listen to this record every year, almost in preference to other, in many ways, better recordings of much of the same material. It is Schwarzkopf's recording of Stille Nacht, Heilige Nacht that plays in my head as soon as I think of Christmas.  It may be the only German I will ever know -- sort of -- off by heart.  The orchestra, the arrangements, even the singer's lovely, bright voice can all sound more than a bit old fashioned now.  It's all very formal, entirely traditional, even a bit poky I suppose.  Perhaps because of that, this record seems to preserve, at least for me, that moment of discovery when, as a boy, I first understood how something could be both pure and complex, simple and profoundly artful.  I understood this music, even as I marveled.  Listening to her sing Franck's Panis Angelicus is as near as I might imagine ever coming in this life again to prayer.

How very different great voices can be!  Here the next of my favorite voices, American this time, and as rich and full as a perfect tawny port, the great Marilyn Horne, with full orchestra and the Mormon Tabernacle Choir, no less!  I know I am of the last generation to buy albums as such, with no thought to buying single songs, but had I no other option, I would be forced to choose between Horne's soulful recording here of  Lo, How a Rose E're Blooming or her big, booming, ridiculously lush Angels We Have Heard on High.  That first is quite simply the most movingly beautiful version of that song I am ever likely to hear, and the second has all the exuberance, optimism and soaring joy ever packed into that phrase, Gloria, in excelsis Deo! 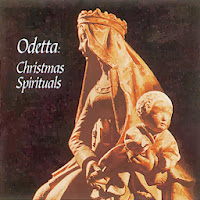 And, a very different voice again.  Odetta was one of folk and Movement performers to whom I listened with fervid devotion in my youth, and then...  There's an earnestness, a sometimes joyless sincerity verging on didacticism to even the best musicians of that generation.  I like to think by now, lessons learned.  Nevertheless, Odetta's Christmas album seems to me as pure a thing as ever she made; there is real joy in this music, and reverence, and the kind of power that isn't to be explained away by saying the woman had a big voice.  Here she is, with just a guitar, singing Oh, Jerusalem and Shout for Joy among others, as if she was having church all by herself.  It's magical.  While I listen at least, I'm glad to go with her. 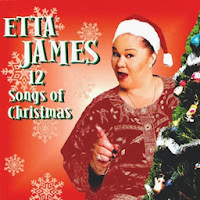 Then there's Etta.  There are as many if not more secular Christmas records in my collection as there are classical and or sacred.  There are lots of jazz and pop performers whose Christmas albums I love.  In addition to my singers, like Rosemary Clooney and Tony Bennett, and yes, Bing and Frank and Ella, I can't but keep Etta in rotation this time of year.  Hers is a favorite because she swings just as hard as Ella and the rest, but with a stomp and growl that was unique to this great lady's inimitable sound.  She rocks and she rolls, does Etta. She makes The Christmas Song sexy.  Her Merry Christmas, Baby is  the only answer to the Charles Brown original.  And when she rocks Joy to the World, singing just behind the beat, and cutting loose on that chorus, the roof shakes. 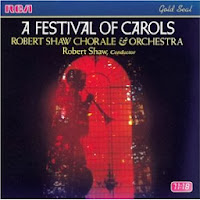 If I listen to all my Robert Shaw Christmas albums every year, and I pretty much do, it is particularly to those a-cappella arrangements from the old Joy to the World album, and reproduced on A Festival of Carols that I repeat and repeat.  The Robert Shaw Chorale was a glorious reclamation of choral music in America, and Shaw the man who made it.  Through all the many forms his choruses took, and all the glorious music they made, with and without accompaniment by great orchestras,  there was always the most amazingly clear and true sound of the human voice, blended into one perfect instrument, and no one ever played it so perfectly as Shaw.  Less pure, perhaps than the children's choruses from the great English cathedrals or Vienna, but nothing so warm, so frankly pleasant, familiar, inclusive and yes, American as the sound Robert Shaw made.

As I suggested above, this little list represents a truly tiny and by no means representative selection of the Christmas music I own and listen to.  Think of what I've left off!  How Odetta and not Mahalia?!  And yet, if I'm to be honest, and there's no reason not to be, this is it, what I listen to most, this time of year.

Anyone still looking for a place to start this Season, could do worse.  Meanwhile, I'm going to go root around in the boxes again and see if I can't find five more.
Posted by usedbuyer 2.0 at 11:34 PM