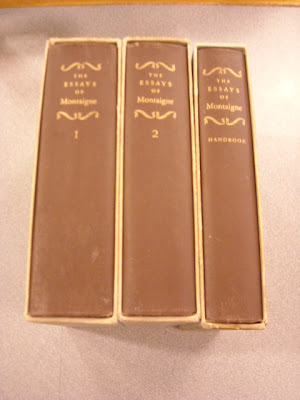 This set of the Essays of Michel de Montaigne should look familiar to just about anyone who has ever browsed a used bookstore in the United States in the past sixty years or so.  I must have seen them, all-together or in forlorn, stray volumes, in shops from Pittsburgh to Petaluma. Never much tempted to buy them.  They aren't much to look at in their plain slipcases, with their brown spines.  Prettier out of their boxes than in, I suppose, and well enough made as books, but... still. 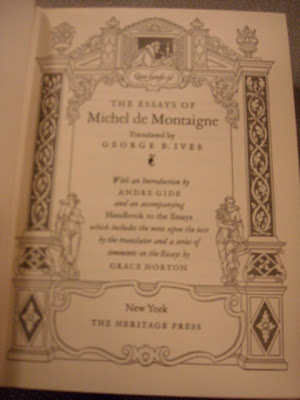 This edition was published by the classic books club, Heritage Press, now defunct.  It was the rather poor American cousin of the English Folio Society, and has aged not nearly so well.  I've never collected Heritage Press. I never much cared for their mid-century, culturally aspirational, if ultimately rather suburban design. They tend to be the kind of big, busily illustrated books that always came in slipcases, with instructions, printed in a convenient pamphlet that could be read instead of the book.  The kind of classics that have "IBSEN," and "SHAW" printed horizontally on the spines, and were meant to be stacked rather than shelved in otherwise sparsely decorated Danish-modern.  This set of Montaigne, published in 1946, doesn't look much like those books, though no better for that.

I've now read Montaigne in a number of translations, from my dear Trenchman, in the old Oxfords I first bought thirty years ago, to the modern Donald Frame that usually stays on my bedside-table. Until I'd read those, I confess, I could never make much sense of the earliest English versions, like the wonderfully wild Florio (1603) and the more faithful if still antique Charles Cotton (1685 to 1700 or thereabouts.)  Don't quite know what made me consider this Heritage Press set finally, unless it was the usual collector's itch for variant editions.  But, I did finally buy the ugly old thing when it came across the Used Books Buying Desk at the bookstore where I work.   The translation is by one George B. Ives, a name unknown to me, and seemingly to even the good Wikipedians, bless 'em.  In my researches, I did find one curious item, among Google books; an advertisement from 1900, for the Neale Company's "Superb Library Edition of the Only Unabridged Translations of the Novels of Honore de Balzac."  His Montaigne is dated 1925, thus contemporary with Trenchman's for Oxford.   From the introductory matter in the Heritage Press volumes, I gather Mr. Ives was a Harvard man.  That's nearly as far as I've got.

Except, for the rather surprising detail, also taken from the introduction, that this translation by poor Mr. Ives became somewhat notorious, when first published, as "the fig-leaf edition."  Acting on the advice of Charles Eliot Norton, himself among other things, Harvard's first Professor of the History of Art, friend and editor of Emerson and Carlyle, and one of the last of the great New England Brahmans, poor old Ives was induced to expurgate all of the earthier passages of the great Montaigne.  When the Heritage Press decided to reprint this "fig-leaf" edition in 1946, as they were prompt to point out in the introduction, they restored all the naughty bits, using E.J. Trenchman's translation!  As I've said, poor ol' Ives.  Here's a man whose publisher in 1900 could brag of as having made "the Only Unabridged Translations" of Balzac, now remembered, if at all, as the bluestocking who made Montaigne fit for Boston!

What's even more curious about the strange history of these books, is the fact that the one thing that did attract me to this set, now that I'd had a proper look at them, was the third volume, consisting of the translator's "Notes Upon the Text," but more importantly, "a series of Comments Upon the Essays by Grace Norton. "  Now that, folks, would be Miss Grace Norton (1834 to 1926,) the sister of no less a personage in our little story than that stuffy old bird, Charles Eliot Norton. 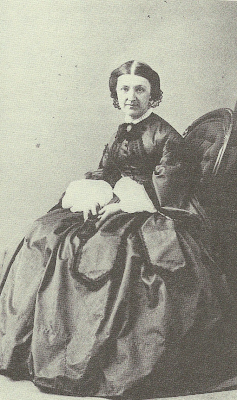 That's Grace, right there, in a photograph probably taken sometime in the 1860s.  There's a very good biography of her brother, The Liberal Education of Charles Eliot Norton, by James Turner, published by Johns Hopkins University Press in 1999.  That's where I got the photograph  above.  From the same source, I learned the rough outlines of Grace Norton's life, which is a predictably circumspect narrative of devoted service and spinsterhood in which she proved something of a second mother to her brother's brood when his wife, Susan died after the birth of their sixth child.  However, though her brother's biographer makes little mention of the fact, Miss Norton proved to be something more than just another Victorian auntie.  She became in fact a respected literary critic and writer in her own right, and most interestingly, in her day, perhaps the most important scholar of Montaigne in the United States.  Privately educated, with a particular appreciation for French literature, she did a fair whack at translating Montaigne herself, it seems, and wrote no less than three books on the great essayist.  (Titles I think I may just have to have printed up for me on the bookstore's Espresso Book Machine, now I think about it.)

Of Ives' translation, now I've had a chance to read a bit of it, I can't say there's much to recommend it.  Trenchman seems to me much smoother; less stilted and made up of better English altogether; both as to the choice of words and the structure of the text.  As for example, the opening line of Montaigne's "Of Repentance", which Ives makes, "Of Repenting."

"Others shape the man; I narrate him, and offer to view a special one, very ill-made, and whom, could I fashion him over, I should certainly make very different from what he is; but there is no doing that."

And now E. J. Trenchman's translation of the same, in two lines:

"Others form man; I describe him, and portray a particular, very ill-made one, who, if I had to fashion him anew, should indeed be very different from what he is.  But now it is done."

Where to begin?  "Form" is better than "shape," "describe" is better than the rather eccentric choice of "narrate," "and portray a particular" is both better and nicer than "offer to view a special one," etc.  Even that seemingly rather simple choice to have the new, brief, very conversational sentence, "But now it is done" makes far more sense as read than that last, very odd dependent clause in the Ives. The bays to Trenchman, I think, every time.

Oh well.  Ives' notes seem quite thorough, if annoyingly packed away in this separate, third volume. Still, good to have.  But really, the whole justification for having bought yet another edition of Montaigne in English, I have to say, must be the "Comments by Miss Norton" on each essay.  These are wonderful!  She is everything, it seems, that poor old Ives was not (though he must have been a nice man, as she was willing to help him with his translation and new edition, it seems, in any way she could, unlike her famous brother who would seem to have done the man nothing but harm.)  In her "Comment" on the famous essay, "Of Experience," for example she briefly explains how the original title, De l'Exercitation uses a word "that has almost passed out of the French language."  She goes on, "It is used by Montaigne not quite in it's Latin sense (one of its senses) of practice, but, rather to signify the result of 'practice' -- experience.  And he did not propose to write of 'experience' in general, but of the experience of death."  That's a better summary of this famous essay than I've ever read -- not that she doesn't go on to discuss it further, she does.  She also answers, with delightful common sense, the great puzzle of this most famous, and famously rambling essay, when she states, "... the subsequent pages have nothing to do with death.  They are another Essay -- and a most admirable and interesting one..." perfectly true, and perfectly charming example of plain, Yankee wit.

I could stand a great deal more of that than was provided by the Heritage Press.  As for Ives, I haven't much use for his translation, his fig-leaf, or for the man who suggested it, the great, Charles Eliot Norton.  Old bore.  But dear old Aunt Grace?  Her, I want to know better.
Posted by usedbuyer 2.0 at 12:45 AM