The Serial Doodler: A Brief Explanation 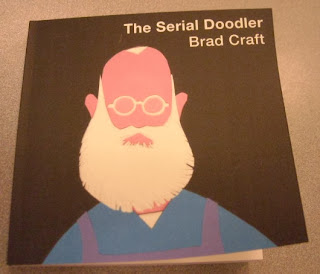 So I started making an annual calendar of my caricatures by way of a "Family Christmas Letter."  You will remember that rather uninviting tradition, surely?  Every December in the mail would come not just the time-honored seasonal cards and the awkwardly posed family Holiday photos (matching sweaters, matching grins, deadly cheer, etc.), but also, from one's least interesting relatives, the homemade newsletter.  Cousin X would have been "thrilled" to be starting a new job "in the motor-parts industry," while Cousin Y would be equally excited to review the progress of her ceramics.  The scholastic and intramural accomplishments of little second-cousins, Z & ZZ would be detailed down to third-place ribbons in 4H (category: calf,) and honorable mentions in sack-race and "hygiene."  This drear document would dutifully be passed from hand to hand, less than gently mocked and eventually, all-too easily consigned to the Yule blaze.

For some years, I did make Christmas cards.  Better say, I set myself the task and made a mess of it.  Over-thought?  Maybe.  The results tended to start off rather elaborately festive (round one, November, gilt-paper, hand-made envelopes) and would then accelerate dangerously into scribbled sentiments, stickers and unfolded, green card-stock, mailed at the last possible minute, or not at all.

When I made my first calendar of caricatures, I'd already had calendars made for the folks; old family photos, each as appropriate as possible to the corresponding month.  Looked good.  I understood the process and the cost, which is still entirely reasonable.  I wasn't sure if my pencil sketches would work in the new format, but I actually rather liked the results.  Selecting the best of the blog's drawings was a way of marking the year's passage -- a la the family newsletter, sorta -- without making something about my own, rather dull little life. (For that, in part, I have this.)  I've been making my calendars of literary caricatures, to give and to sell, ever since (the latest, I believe, is the fifth.)  The great benefit has of course been making something in multiples, to give as gifts, and having something of my own to sell as well.  It's proved to be mildly popular.

Then, last year, I did a little book just on the Espresso Book Machine, A Is for Auden: An Alphabet Book of Poets.  It was all original content, pictures and rhymes.  I was inordinately proud of it.  Keep in mind, it runs to roughly 35 pages, including the the hand-scribbled index.  Again, it was primarily meant as an easy gift to give, though in addition to the dozens I've given away, the bookstore has sold 50 copies, which has been a happy shock.

And so, at last, once more unto the breach.

This year, as I'd made no original book, and, as I am approaching the fifth anniversary of Usedbuyer2.0, I thought a retrospective of one sort or another.
Doodles seemed the obvious choice.  I've drawn and posted hundreds here; mostly just of passing faces and jokes very much of the moment at the general Information Desk.  However, with some regularity, I have gone off on a tear and just doodled a joke to death.  It was these that seemed to best worth preserving, though even here, I selected only those I thought might still amuse.

As always, I put all of this off far too long, fussed and muddled myself until the time was neigh too short for the doing.  I learned what a "flash drive" was, or rather, was instructed at least to buy one, plug it in and copy my files to it (having first figured out how to put the digital versions of my doodles into  virtual files.)  Through the truly heroic efforts of my friends and coworkers, Anna, Michael and Josh, and despite a solid month or more of mechanical difficulties with the EBM machine itself, we've only just managed to make copies of the thing to sell and send.

Here it now is, priced at $15.00, with a proper ISBN and barcode, and in stock as the much crowded printing queue will allow.  I hope to have a proper sort of launch for it at the bookstore, schedule allowing, near the end of February.  I mentioned using an "overhead projector" and was laughed down by my juniors, who will have to explain to me the finer operations of something called a "power-point presentation," whatever that may entail.  (I'm thinking maybe a doodle history of power-point presentations.)

If any then were curious what all fuss was about in the preceding few days and posts, this is it.  Call it, a "soft opening" (a somewhat revolting, if strangely inviting phrase, no?)  Anyway, here it is at last, my latest.  May it make someone laugh.  That's the hope, anyway.
Posted by usedbuyer 2.0 at 9:01 PM