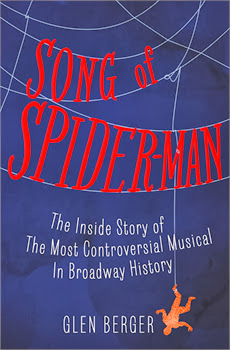 It is just so easy to make fun of Nascar; the noise, the crowds, the meaningless devotion to speed.  Then there's the bloodthirsty anticipation of flame-outs and fiery crashes.  It's all just so awful, isn't it?  Beneath contempt.

Now, admit it, queen. Much as we thrill to the perfection of the overture to Carousel, however unforgettable the night Tyne Daly opened in Gypsy, much as we treasure our rare Barbara Cook vinyl, for all of us who love musical theater unreservedly, there is also, always. a secret, blushing fascination with the flop.  How can one resist the tales of what might have been, or better yet, what should never have happened?

Who among us hasn't paused to study the carnage of some unnatural disaster, stared spellbound at the collapse of some grand folly, marvelled at the waste and devastation of some truly spectacular mistake?

Among my theater books and Broadway memoirs, hard-by the wonderful Ethan Mordden histories, and my James Agate Egos, and the rest, I still treasure Not Since Carrie: Forty Years of Broadway Musical Flops, by Ken Mandelbaum as a special favorite.  (If you've not read it, do. The horror, the horror.)  That book inspired a long and satisfying, if largely fruitless search for the original cast recordings of many an otherwise lost and unknowable show.  It also gave me a taste not just for the neglected little gem, but also a new appreciation for the really Big, Bad Idea. 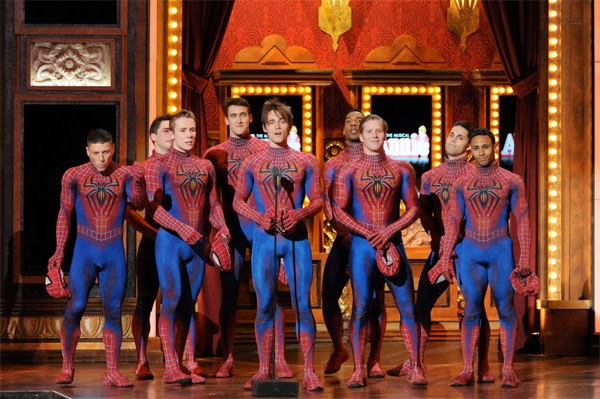 Just above, nine blue-thighed beauties at the Tony Awards.  This photograph represents perhaps the only truly happy moment anyone connected with the show these boys were in ever experienced that night.  Please note the obvious, healthy vigour, the pure, youthful innocence on those handsome faces, because this may also have been one of the few evenings when no one in this cast was not in a cast.  Still, aren't they pretty?

When I saw the new book by the co-writer of one of the most notorious shows in recent Broadway history, I knew it was something I had to read.  Truth be told, I've been waiting for this book for years, at least since I read some of the original press coverage, certainly since I first saw the hyphen in the title, Spider-Man: Turn Off the Dark, and knew there was something very, very wrong.  Too true.  Since I read the book, it's been announced that the show is closing on Broadway, and moving to Vegas.  And there we are. 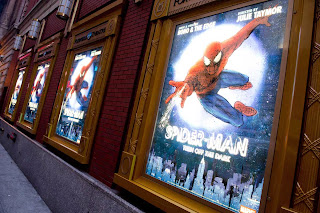 Glen Berger's new book is the story of one Big, Bad Idea after another, but the one that seems clearly to have led to all the others is right there. on just page twenty-three.  It's the Spring of 2005.  The author's just been hired on to write the thing, based on one rough scene, which even he admits he wrote on spec, in one night, as something of a lark.  The producers liked it.  He was in. Berger's long collaboration with the director and co-writer, Julie Taymor has barely begun.  There is, as yet, no show.  Berger has just met for the first time with the composers Bono and "The Edge" of U2, and as Taymor & Berger walk away from that rather heady encounter, Berger offers the following:

"Finally, I blurted out, 'You know, Julie, in a certain light, Spider-Man the Musical is kind of a ridiculous idea.'

Julie frowned, furrowed her brow, and said, 'Ridiculous?  I don't think so.  No.'

She wasn't just serious, she was solemn.  I stammered out a 'Oh -- but I'm certain -- well, no, I didn't really think that either.'  But now I was scared.  I just assumed everyone thought this project was potentially ridiculous.  Obviously it wouldn't be ridiculous by opening night, because Julie Taymor would make sure of that.  But -- hoo -- was I really working with someone who hadn't once entertained the notion that perhaps a musical about Spider-Man was... just... you know... ludicrous?"

There it is.  There's the show, the book, the whole sad story, as it were, in roughly one hundred words.  Note the italics -- the dashes -- the ellipses...

Millions of dollars and much, much later, on the very edge of Taymor being fired and Berger among others being sued by her, at least according to the author, the director herself will finally say something of the kind to her erstwhile collaborator; ridiculous indeed.

In his book at least, Berger is at some pains to give the lady, always, her due.  If anything, he's surprisingly kind, even affectionate, if not obsequious, in his respectful portrayal of her here.  Remember, by his own confession, he was an active participant in getting Taymor the boot.  It's frankly a fascinating, perhaps unintentionally disquieting thing to read; all that kow-towing before, during and now after the fact to the genius of Julie Taymor.

What, if anything, Julie Taymor will ever say or write about this show, in Berger's book we have at least one side of a surprisingly complicated story.  Complicated and no.  It's true, there were entirely too many moving parts in this contraption, too many people with a stake in the show, and an opinion of it.  Just moving all the dramatis personae on and off, even in just Berger's book, can be a bit of a chore.  Nevertheless, from it's inception, the fatal flaw in this show would seem to have been in the collaborator's making of it in the first place.

It was, frankly, a dumb idea.  Good shows have been made from less, and worse, it's true.  As this book shows, if anyone might have made something from this particular nothing, it ought to have been Taymor.  This, after all, is the woman who made The Lion King into a Broadway Behemoth, the great cash-machine that it is still.  That was clearly the problem here, ironically enough.  (Any discussion of that show, which I've seen and enjoyed royally, always reminds me of something another of Taymor's former collaborators, the actor and comedian, Mario Cantone said about it in his one man show on Broadway.  The actor hilariously explained at some length why he turned down the chance to play Timon on Broadway, after creating the role in an earlier workshop.  When his audience clearly expressed some shock at his bitchiness about this now beloved Broadway institution, Cantone, devastatingly, shrieks, "It's a PUPPET SHOW!")  Perhaps then the Big, Bad Idea here, the point of departure for all the years of bad ideas to come, was not Spider-Man The Musical, while that is certainly bad enough, but trying to make of such a thing another Taymor spectacle; another inflated children's cartoon, decked in pennants and masks, and weighted with adult metaphor, in other words, another Lion King.  What this show was perhaps always destined to be was what it will shortly become when it transfers to Las Vegas: Cirque de Spider-Man.

Berger bears a larger share in that than almost anyone else on "the creative team."  He wrote the version that cut most of Taymor's more labored metaphysics and unworkable production numbers from the final show.  Even he seems to find this betrayal almost as unforgivable as Taymor did.  But then, unlike the lady genius, poor little Glen wasn't making Lion King money, or really any money at all until and unless this Spider-Man made it onto the stage and into the black.  His ultimate justification for sticking it out and sticking it to Julie Taymor?  His kids gotta eat.  As arguments go, his is not without an obvious merit.

And now he's written his revenge, after a rather cringing fashion.  For me at least, this last little betrayal was more fun than I might admit without blushing.  Hope he's made some money at last.  Hope Taymor does something more worthy of her talents hereafter.  Hope all those adorable Spider-Boys can stay out of the hospital.

Hope the next guy to collaborate in a major Broadway debacle keeps such careful notes of the process.

Not that I'm hoping for a crash again, or anything.