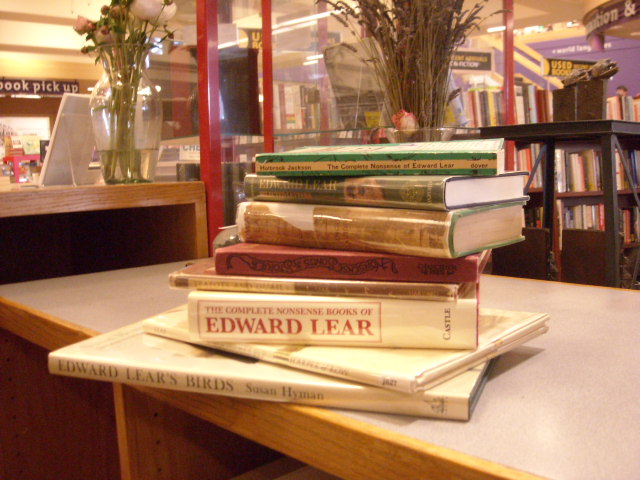 Pictured are some of the dozen or so books I own by or about Mr. Lear.  I've read or reread perhaps half a dozen more, in preparation for tomorrow's event in the bookstore where I work.  I thought I might, as the teacher used to say on test-days, "show my work."

To make one of these events from scratch requires a certain labor -- admittedly of love -- and while I don't mean to natter on about the work involved and by that way discourage others or make too much of what I do, I did think I might make a clearer picture of just what that is.

A few facts then:

For A Runcible Reading of Edward Lear, to be given Saturday, June 8th, at 6PM, I read or reread all four of the biographies of Lear that I own.  (The most recent and the best for scholarship and honesty, is probably that of Vivian Noakes.  My favorite, and the most quotable, though, would still be the now rather quaint volume, published in 1939, by Angus Davidson.  This last still full of blushes at Mr. Lear's romantic friendships with handsome young men, and a touching faith in the sincerity of Lear's passing jokes about getting himself a proper little wife.  Never happened, by the way.)  I read no less then six critical essays, in books and online, on Lear and his nonsense, though I found little enough in any of these to not bother recommending any but Chesterton's.  I read three collections of Lear's letters, with special mention of Noakes' selection for the Oxford University Press, which has the virtue of modern organization and good pictures.  Of course, I read and reread the poems.

The whole of this probably took me the better part of a month or more, on and off.  I filled twelve half-sheets of standard typing paper with notes.  (It is my habit to make my own "notebooks" in this way, as I can fill the paper with my own crabbed handwriting and scribbles without wasting a proper notebook.  The folded sheets, back and front, I can then tuck into whatever book I happen to be reading at the time.  I cannot always read my notes, however, even in the best light, even as I write them.  Oh well, I find the writing itself a help.)  I probably used a few dozen Post-It notes as well.

It took me the better part of three weeks then to produce what I hope will be the final draft of my script for the reading; writing a connective, biographical narrative in which to set the poems and quotations.  The whole evening, with music, should, if all goes well, run to roughly forty five minutes -- with, I hope, the occasional pause for murmurous laughter.

Now, there's nothing to say that someone might as easily have made an event just as entertaining or better, by simply marking out some favorite poems in a book and reading those aloud.  The best part of reading aloud, even to the public, may be the discovery, and few things are better fun than that being shared with enthusiastic listeners.  Still, rehearsals are what will hopefully get me over the hurdles of some of Lear's invented words and the rest, so I find, being a rather nervous reader, that I have to have a proper plan, and a printed script to see me through.

Of course, all this comes to naught without an audience.  Even if I am to read to just a few friends and the beloved husband, A. -- if his hip ain't paining him -- I can't seem to do it any way but the way I do.  Three people or fifty, my preparation is the same.

Again, I'm showing something of what I refuse to call "my process", not begging sympathy, but because I do think it important to show that this business of making a series we've decided to call "Light Readings" isn't all just so much larking about and giggles, though hopefully there will be more than a bit of that, too.

Nonetheless, I do so hate the phrase, "dramatic reading", at least as applied to this series.  It's true, I've done a fair bit of fairly dramatic reading to prepare for it.  It's also true that my reading-style, if so it must be called, can be a bit unintentionally dramatic now and then, though better say, "theatrical", I think.  But to my mind, a "dramatic reading" would be actors at a long table, with assigned parts in an Ibsen play, with a stage-manager reading the directions:

Not a bad thing, I suppose, but not what I do.  The phrase smacks of declamation and men in Lincoln hats and beards, reciting the Gettysburg Address at Fourth of July picnics.  (I may affect a smart little cloche while reading Dorothy Parker aloud, and have, but that is a joke, people, not a costume.)  No, to use one of Lear's own words, I find the phrase "dramatic reading" perfectly buzztilential and particularly annoying when hitched to the gossamer charms of an evening of light verse.

Still, the intention was well meaning enough.  I must remember that.  But it is something of a burden, that phrase, and what anyone might make of it in combination with "The Pobble Who Has No Toes," I shudder to think.