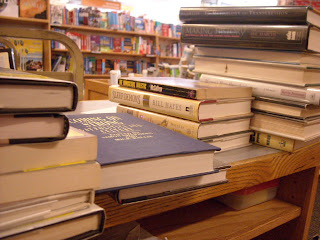 Here then the results of two queens' housekeeping.  I am not alone in trying to get a start, at least, on a more realistic personal library as the second act looms into view.  My boss and fellow bibliophile, M., contributed at least 100 books.  The rest were mine.  The number for sale -- at a mere $3.99 a book -- rounds out to just shy of 400 books.  Nearly all of it is hardcover, in excellent condition, nearly all the dust-jackets in new mylar sleeves.  Signed copies, lots of first editions, and some rare old things makes this, if I do say so myself, a pretty impressive selection of GLBTQ fiction and non. 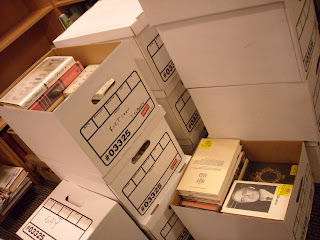 It took some work to get them here.  The "deselection" process, to borrow a rather useful if ugly word from our librarian friends, was a rather depressing task.  One hates to say goodbye.  Cleaning and boxing and loading and unloading books makes me wonder why I couldn't have taken up stamp-collecting instead. 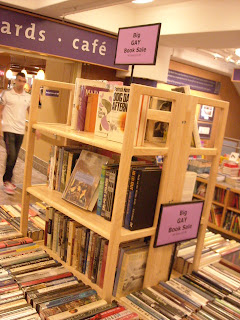 With help from our own amazing Remainder Buyer, N., a table in the lobby was cleared, reconfigured and loaded up anew with more Gay than could normally be confined in so small a space.  After tagging all the books and getting them out on display, I must say that this was ultimately a pretty satisfying task.  Here they are at last, ready to find new readers -- hopefully -- and good new homes.  Add a hastily manufactured sign and the Big Gay Book Sale is up and running! 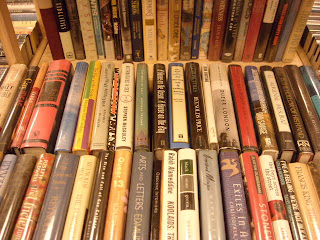 Hopefully there will be customers to discover or rediscover these books; readers looking to fill a gap in their personal libraries, students for whom these books constitute an unknown history, collectors in search of the rare, the unusual, the autographed copy.  Remains to be seen, as the books just went out. 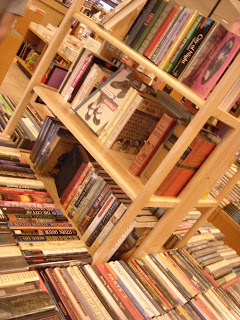 The effort's been made now.  The conversation, at least with staff has already started.  Someone found at least one first edition of a book more recently reissued by NYRB, and I was able to show him another.   Another of us found an anthology for herself, and another for her brother in Palm Springs.