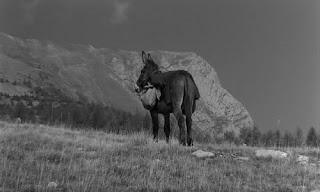 A friend today asked online for suggestions of movies "about faith and/or values", for a project he's working on.  Evidently, this sort of request via social-media is called "crowd-sourcing."  (I did not know that.)  Before we proceed, here's my list -- from the top of my head, and in no particular order:

Robert Bresson's films came first to mind, specifically Diary of a Country Priest (Journal d'un curé de campagne), 1951, The Trial of Joan of Arc (Procès de Jeanne d'Arc), 1962.  Both are beautiful, and the latter, now I think of it, almost as stunning in it's own way as Carl Theodor Dreyer's The Passion of Joan of Arc (1927). Had I thought of it, I might have added perhaps my favorite Bresson film, Balthazar (Au Hasard Balthazar), 1966.  This last being, I think, perhaps the greatest Christian allegory in film -- not that I look for that sort of thing really, or have much patience generally for allegories of any stripe.  Still, a beautiful, heartbreaking film.  It's about a donkey.

Though I forgot Dreyer's "Joan," I did remember to suggest his Ordet (The Word), 1955.  There aren't many movies that better dramatize faith and miracles.

I can still remember being a freshman in college and watching Andrei Rublev, (1969) directed by Andrei Tarkovsky, and being dazzled by it.  So that went on the list, along with Pier Paolo Passolini's The Gospel According to St. Matthew (Il Vangelo Secondo Matteo), 1964.  Saw that one roughly the same time.

Finally, I thought of one more recent film, from 2010, Of Gods and Men, (Des hommes et des dieux) directed by Xavier Beauvois.  The true story of a French monastery in Algiers, in 1995, where local fanatics committed a massacre.

Anyway, that was my list.  All beautiful films, more than a few, masterpieces.  If you haven't seen these, do.  I'm not going to review the movies now, so much as the list, and a few hopefully related matters.

Mildly interesting to me at least to note that of the eight films I've just mentioned, half are French and all were made in a language other than English and none in the US.  Maybe their foreignness makes the subject somehow more palatable.  I  don't think that's true, but it may be. Thinking a bit more about the movies I recommended, it's also curious how many of my suggestions ended up being about Catholics, to begin with, and Christians all but entirely -- the only slight exception being that last, which involves a conflict between Christians and Muslims, though the story is entirely from the point of view of the Catholic monks.

It may not be obvious from such a list, so for any who might not already know, I am not a Christian nor was I ever a Catholic.  I am not a believer.  I am an atheist.  I shouldn't think that that will come as much in the way of news to anybody reading this, as I assume for the most part that those who do already know me, but there we are, just in case.  I should likewise be shocked myself to find anyone shocked by an atheist admiring these films, or recommending them as great films on the subject of faith.  Should the comparison be required: I also enjoy Gospel music -- traditional, not contemporary, and Bach's Mass in G Minor. I admire the ceiling in the Sistine Chapel, and look forward around Easter to the re-introduction of Mini Cadbury Candy Eggs at the drugstore.

I don't mean to be flip, or maybe I do, but anyway I don't see why my disbelief should be an issue.  Clearly, it isn't an issue for a number of the other contributors to my friend's list, and that is what I'm finding fascinating. (The list is ongoing.)

I suppose I might have anticipated things like Star Wars and The Lord of the Rings Trilogy.  Others, like Roland Joffe's The Mission (1986) and Michael Tolkin's The Rapture (1991), I'd simply forgotten about. As might be expected, I was pleased to see Bill Maher's Religulous (2008), Monty Python's Life of Brian (1979) and Kevin Smith's Dogma (1999).  There were a number of others that I hadn't thought of but that as soon as I saw them suggested I nodded.  Others, not so much.

Crash?  Wait, the one that won the Best Picture Oscar in 2004?  The Paul Haggis movie with a large and unlikely cast and stories to match?  The one that beat Brokeback Mountain?!  Trying not to focus on my memories of personal disappointment that year, and keeping in mind the list-contributor's comment, "in the social sense of values," I get that.  That could be an interesting moral discussion, no?  Admittedly, from what I remember of the movie, it was not perhaps the most balanced picture of contemporary society; leaning rather dramatically on a certain element of criminality for a number of it's myriad plots, subplots and coinkydinks, but it was certainly a complex and diverse sampling of humanity, wasn't it?  Excellent suggestion then, and one I would never have thought of.

Someone else, rather brilliantly, I thought, suggested Krzysztof Kieslowski's extraordinary The Decalogue (1989).  A series of ten, one-hour-dramas, originally made for Polish TV, each film takes one of the Ten Commandments as it's focus.  Kieslowski's Three Colors, three of my favorite films of the 90s -- and three of my favorite films of all time, also made the suggested list, independent of the earlier Kieslowski recommendation.

I was also delighted to see that someone else I do not know suggested Bresson's Mouchette (1967), which I've never seen!

There were at least a dozen others when last I looked, and probably a dozen since.

I do love a list, pretty much any kind of list.  This turned out to be a specially good one.  I was intrigued by the variety of suggestions and the good humor and enthusiasm with which all sorts of movies were suggested.  I was also heartened by the complete absence of cant.  (Even in so friendly a setting, I was expecting at least one mildly disapproving or dour expression of piety.  Not a one.)

Would that all such discussions touching on religion could be this civilized!  (Perhaps film is the common language of our time after all.)  Anyway, I feel I've learned something.  And I've made a little list.
Posted by usedbuyer 2.0 at 8:02 PM