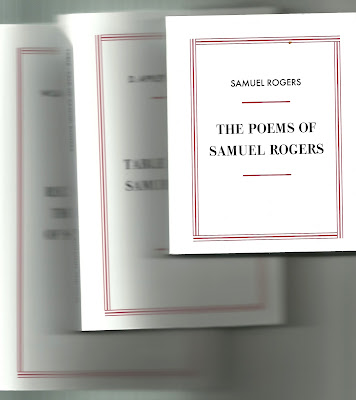 I have a friend who works in the other side of the bookstore, a very talented woman, with a gift for arranging small things beautifully.  In fact, she is our display artist -- for want of a better job description.  She takes all the things that we old-hands in the book business used to call, in our arrogance, "sidelines": bookends and candles, soap and soap-dishes, bells and scarves and little stone statues and what-not and what-all, and she makes from this welter of items, displays of great complexity and retail attractiveness such as will make even the least likely browser stop and explore.  She is the mistress of the bookstore's curiosities; of all the things one might never have thought to want or buy until one's seen them artfully arranged; like with like and like without, in great constructions of multiples and singularity, in witty and whimsical and even magical relation one to another and one to the next.  No one has ever made, for example, a rather haphazard pile of recently reduced "merch" into such a fascinating concatenation of desirable stuff.

She is also, in her leisure, a photographer and finder of curiosities of all sorts.  She can take a bit of gum on a lamp-post, or rocks in a ditch, find a doll's head in a patch of moss or a fallen bird's nest just by the root of a tree, put a scrap of one thing next to another, and make the viewer see something new and beautiful and wonderful; a discovery made, a color reconsidered, detritus transformed -- if for just a moment and only by her art -- into treasure.

I've known a lot of people make displays.  I've never known anyone with quite her sorcery.  Treasure indeed, she is herself.

Tempted by her tables of things, I was set to musing on curios and the curio-cabinets I remember being in every grandmother's parlor when and where I grew up.  Remember those homely, glass-fronted bureaus?  Not the stately china-cupboards that displayed the unused mass of every lady's better bone and silver, but the smaller furniture, often as not a "corner-cupboard", or even just a narrow box of glass shelves.  The curios displayed, as I remember them anyway from my own grandmothers' houses, might be china figurines, and delicate dolls, cut-glass dishes and baby's shoes cast in brass, but just as likely tourist trash from otherwise forgotten trips; like a fringed, silk pillow from Rehoboth Beach, or a celluloid elephant that walked in a wobbly way on weird, rectangular feet if bumped gently enough from behind.

Literature tends to be taught, and rightly enough, from the china cupboard; all that weight of important books, the great masterpieces and collateral sets; Austen and Dickens stacked, with Richardson and Tolstoy, displayed like massy punch-bowls and soup-tureens.  I've always had a certain affection for the curios, myself.  One of the wonders of having access to an Espresso Book Machine has been the ability to browse among the lesser shelves of literature and dust off forgotten titles and the barely remembered authors now largely confined to footnotes, even in the big Nortons.

Samuel Rogers (1763 - 1855) was a poet between two times.  As a boy, he twice went to knock on Dr. Johnson's front door.  The first time he was told the Doctor was not home.  The second time, he lost his nerve.  That would be perhaps the last times Samuel Rogers failed to meet a famous man.  The son of a successful banker, and despite his own youthful leanings to both poetry and the pulpit, Rogers would himself follow his father into the bank.  Though he abandoned all thought of preaching, young Samuel did publish his first book of poems at 23.  (He would publish his last original work fifty years later.)  When he inherited his father's fortune, the banker's son promptly retired from trade, built a fine house in London and became one of the literary lions of the age.  An invitation to breakfast was a sign of arrival for new writers. An invitation to his more intimate dinners was a more singular honor.  Rogers published a book with Byron, unlikely as it sounds, counted both Shelley and Edmund Burke as friends, and lived to read, meet and like Charles Dickens.   He used a considerable part of his personal fortune to relieve artists and writers down on their luck.  He paid to keep Richard Brinsley Sheridan from dying in utter want.  When his friend Wordsworth died, Rogers declined the post of poet laureate due to his great age, and happily endorsed his friend Tennyson's appointment in his stead.  His own early style owed more to Thomas Gray and Goldsmith than to his Romantic contemporaries, but his latter writing might be said to be representative of a high-minded Victorianism.  Neither quite fish nor fowl then for the anthologists, though he still figures in at least the history of English literature, if nowhere else.  I confess, I'd never read him until just now.

So... where'd he go?  In his day, as I've already suggested, Rogers' poetry was much admired by many poets now better known -- his' "Jacqueline" was published with Byron's "Lara" in 1814 --and a number of Rogers poems, like "Human Life" were once as popular as anything by Shelley or Keats.  Critics as late as the turn of the last Century could still be understood when using only his surname.  Even now, I would be hard pressed to think of another poet more often sourced in the biographies of his contemporaries.  Nonetheless, I suspect that the answer to where he went is as much in his biography as in his poetry.  Rogers did not have the mixed blessing of dying Romantically young, like "Byron and Shelley and Keats," in Dorothy Parker's memorable line.  Instead he lived and wrote to a ripe, and largely contented old age.  More importantly still, and unfortunately for his later reputation, the poetry of Samuel Rogers was nice.  (He was himself invariably kind, but not always nice.  Fanny Kemble said, "He certainly had the kindest heart and unkindest tongue of any one I ever knew."  He said of himself that having such a small voice, no one listened when he said pleasant things.)  Here I mean nice in both the Eighteenth Century sense of an elevated subject expressed in a well regulated line, and the Nineteen Century sense of poetry suitable to be read by virgins.

Witness this, from the aforesaid "Human Life":

Now, seraph-winged, among the stars we soar;
Now distant ages, like a day, explore,
And judge the act, the actor now no more;
Or, in a thankless hour condemned to live,
From others claim what these refuse to give,
And dart, like Milton, an unerring eye
Through the dim curtains of Futurity.

That is as well-turned as the leg of of Georgian secretary, and as smoothly pleasant.  Hardly the sort of thing to inspire much in the way of new dissertation on his inoffensive metrical form or his equally unremarkable morals.

To the extent then that Rogers has survived it has been because of his conversation; the "table-talk" recorded in not one, but two separate and distinct volumes and comprised of the kind of casual remarks and reminiscences of his contemporaries and friends that make him such a bottomless well of anecdote and quotation for modern biographers of the Romantics and early Victorians alike.  (As I learned from one of the volumes I had reprinted on the bookstore's EBM, Wordsworth, for brief example, had a strained laugh.  No surprise there, egh?)

That's how I found the old boy myself.  Dickens scholars invariably make mention of the novelist's first success and celebrity being recognized in an invitation to breakfast with the old poet.  Rogers also figures in the memoirs and journals of the Irish poet, Thomas Moore -- likewise a great source now for writing mostly about other people.  So, like Henry James later when he was at the height of his dining out, one meets the man everywhere.

The grand thing about having access to these inexpensive but sturdy reprints is the opportunity afforded to poke around in some of the dustier corners of English literature; to shop, as it were, from the back shelves and among the smaller treasures.  Having found not one, but two versions of Rogers' "Table-Talk" and reminiscences, I can for roughly a sawbuck more, have the old boy's Poems - most of 'em, anyway, as well.

The last great literary success of Samuel Rogers came from the volumes of expensively illustrated narrative verse he made of his trips with his maiden sister to Italy.  As it stands, I might have those as well whenever and if I ever feel the want of them.  For now though, I am content with the very good poems -- some of 'em -- and the heaping notebooks of his talk, large and small.  (I even had reprinted for me a short biography Rogers in a volume of Edwardian essays on various subjects.  At about 50 pages, that proved about right for my attention to the poet.)

And all these curiosities now home with me, snug in just the pocket of my bathrobe of a warm, new Summer's evening.
Posted by usedbuyer 2.0 at 10:22 PM