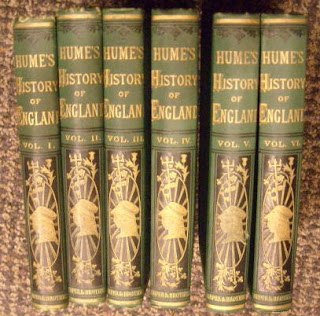 So we've been watching HBO's  Game of Thrones and, yes, we watched "the red wedding" episode last Sunday, as did, it seems, more people than watched anything else on cable-television that night.  More curiously still, more people watched that episode than actually subscribe to HBO.  (A fascinating story on NPR explains how this was possible.  Not to worry now, neither I nor the radio link should spoil the show for any who haven't seen it, or seen that episode.)  And we've now watched the finale as well.  For any who haven't read the George R. R. Martin books, or seen the show, and might be wondering what all this blaze in the Twittersphere etc. is about, that penultimate episode was a specially violent one, perhaps the most violent one to date. Moreover, good people, people important to the story so far, died.  Shocking.  As for the resulting television-fan-outrage, the wave of new memes and the rest, what all that means is that frankly, too few people read history.

I should mention that I have not read Martin's books.  It's almost an exaggeration to say that I "perused" the first volume.  I did finally pick it up though, when after a very long wait, the last sequel finally came out to great fanfare a year or so ago.  (?)  I poked around in that first book for a couple of evenings, but that was all.  I'm not being snide.  I got a taste of the novelist's style.  That was enough.  Nothing wrong with it.  There's nothing, based on my brief experience, to say Martin's work isn't a fine example of the genre.  He's enormously popular.  His readers are devoted.  I know and love a number of them.  But, I wasn't going to read what looks to be only the first brick in a still rising wall, is all.

Now that may seem strange, considering my established devotion to long books, but there we are.  I'm not one for dragons, generally, a fact equally well established.

I prefer my Fantasy on film or television, and in smaller, more digestible doses.

I don't mean to be a tease by mentioning all this popular culture and then actually writing about a very old, and no longer very popular history. There is a point yet to come, I promise, but first a word or two on my summer reading project.

Even as I contemplate further reductions in my library, I have to admit I've had my eye on these beauties for a month or more, down the street at Magus Books.  I've been setting aside my nickels.  They weren't cheap.  (They still have a second, all but identical set, if you're interested.)  I've never seen this book -- and it is one book in six volumes -- but in a distinctly unattractive, academic, paperback edition which did not appeal.  Nevertheless, this book has been on my list now for a very long time, so when I saw these handsome old things on the shelf, and though it took me some time to finally make up my mind and my budget, I did decide to have a go at last, so here we are. 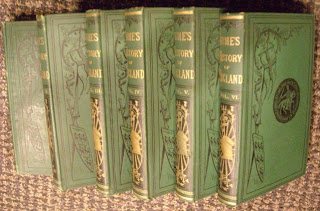 Pictured then is David Hume's History of England: From the Invasion of Julius Caesar to the Abdication of James the Second.  For any that still remember the name of David Hume, or know his writing as an important philosopher, it may come as something of a shock to know that in his own time, and for a good while thereafter, he was known primarily as an historian.  It took him more than fifteen years to write this book, which contains more than a million words.  The book has gone through more than fifty editions, and one way and another, has never been out of print since it was published in it's present form, in six volumes, between 1754 and 1762.

Hume believed that the nature of humanity didn't changed all that much; that history shows us more often at our worst than our best, and that most people, left to themselves, only really concerned themselves in politics and slaughter under the influence of religious and what we would now call ethnic differences. He also believed that the history of England, after a very rocky start, at the time of his writing this book, presented perhaps "the most entire system of liberty that was ever know amongst mankind."  That, you see, was the point of telling the story, really, the struggle to that point.

This would be the common theme for most of the greatest narrative historians of the last two hundred and fifty years or so; the struggle for a stable and relatively free society, unshackled at last from the old, exclusive loyalties to tribe and conquest, and defined by a progressive establishment of the rule of law and mutually beneficial civility.  From Hume, through all his successors in both Britain and the US, from Macaulay to John Richard Green, to Henry Hallam and William Prescott, and yes, Karl Marx, whatever their differences politically, this theme predominated until nearly our own day.  (I make that list from my own reading, admittedly limited by literary reputation and my own taste in such books more than the ultimate value of these books to present historians.  I see no reason to apologize for it.)  There have always been writers who took exception to this progressive reading -- here Gibbon and Carlyle come most to mind, again, mostly from the evidence of my own shelves, but I still think it a fair description of most of the major popular historians down to at least H. G. Wells, if no further.

It's all very easy now to dismiss this kind of history as too narrowly rhetorical to be entirely true, and there has been much hay made in the academic world of "historiography" in more recent days, by denying even the underlying premise of history as any kind of progress at all.  To which I say "stuff."  I am more than willing to concede all the limitations of such great writers as these, both in terms of their access to the historical record and their prejudices.  It takes a certain intestinal fortitude in the common reader of the 21st Century to read Englishmen of the 18th and 19th on such subjects as Islam and "foreigners" in general.  I also happen to think that we are now living in what may well prove to be the first truly Golden Age of history as fact.  There are, I should think, more thoroughly researched and accurate histories published in any given year of our Century to date than might have been possible in any previous period.

Why then read old boys like David Hume?  First because history as literature, at least in the period described from the middle of the 18th through the beginning of the 20th, produced more established masterpieces of narrative, in English, than any time since, and more history of lasting literary value than any time since the last Roman historian went into the ground.  What all these boys have in common with Livy et al is not only a gift for the description of character and event, but a tempered and coolly considered belief in what Pope described as "the proper study of mankind."  That can be quite refreshing after any time spent reading what's come after.  Secondly, because there have been few enough books produced in the whole history of books, at least books running to roughly a million words or more, that are still worth reading at all.  Why not read those big books that happen to be history as well as literature, if one is of a mind to read literature anyway, and big books, at least now and then, of a season?

And so we circle back, no?  It's clear from even just watching the TV adaptation and glancing through one volume of his novel, that Mr. Martin has read a bit of history himself.  My preference is for history without dragons and magic, as I've said.  One of the pleasures of Hume is his not-so-subtle distaste for what he cannot help but call "superstition" pretty much everywhere he meets it, from the Romans on, and not excepting any of the major faiths to touch his country since.  Refreshing and sensible, if still a little -- and deliciously -- shocking in a man writing more than two hundred and fifty years ago.  I suspect Mr. Martin's preference is for exactly those historical sources my friends from the Enlightenment and after could not help but disdain for their reliance on the supernatural; all the saga-singers and the monks who preferred heroes and monsters to men and women. A perfectly respectable preference, if not one I share.  That may be all it comes done to; a preference for magic or man.

As for the shock and horror of my fellow television viewers of the bloody Game of Thrones, I can only suggest they might want to avoid reading some of the stories, say, of the reign of King Canute, or even the details of more than one treacherous Norman noble party, or even the fate of conspirators, real and imagined, against the person of that great queen, the first Elizabeth.  History is a bloody business.

But then again, no.  I would make so bold at to suggest that a chapter of Hume on the Crusades, or of Gibbon on the triumph of Christianity might immunize the more parochial readers of even the best Fantasy fiction, and fans of supernatural television shows, against credulity thereafter.   Might do them all a world of good.  Did me.  I would deny no one who wants them their dragons, or their bottle-blond emancipators of brown people, etc.  I would however suggest that history sans magic, need not be without heroes and heroines, villains and adventure, thrills and chills, elevating sentiments and moral instruction.  Moreover, some of the greatest literature in ours or any language is to be found in books written by men who disdained violence and the arbitrary exercise of power, even as they chronicled the worst of it.  They did not put much faith in Gods, or have much patience for priests, nor give much credence to stories of ghosts or  witches. They disdained superstition.  They believed in a fallible humanity and in the strength of humane institutions.  Doesn't that sound rather more like us than not?

Not that there's anything wrong with reading about or watching such stuff.  History shows, people have been doing it for ages, and where's the harm?

I'll tell you what though, history's more help when it comes to reading a newspaper and trying to make any sort of sense of current events -- I find.  People still do that too, read newspapers, don't they?
Posted by usedbuyer 2.0 at 11:16 PM