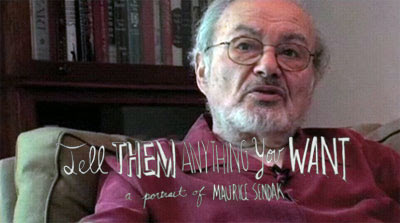 One of the grandest things about paying for cable television is the access it gives one to films that might otherwise pass unnoticed by, or play in the city for just a week or a day, or at some crowded festival. For every blockbuster that requires a big screen in a big theater, there are a dozen interesting, smaller pictures, fictional and documentary, that can be experienced with real pleasure on TV, in bed, with maybe a sandwich. Renting movies from Netflix or from a great video store requires getting out of bed, trusting to other people's descriptions and promotional materials, making choices in other words that can't quite be judged until after some effort. In bed, on my back, I can press a button, and then another and another and so on, and passively command a whole troupe of great actors, directors, writers, to pass before me in review, and stop any I like the look of and bid them, "play." I am the pasha with a remote control.

Because the pay channels extort ridiculous fees for this privilege, I try more things than I watch and watch more things than I should. It's there, the television, whenever I want it. I'm paying for it. I use it. All those wonderfully productive people who watch little or nothing on the tube, who read and write and interact with the world more than I do, I understand their reluctance to give over to television. They are right to resist it. It is full of bad and stupid things. If I were to claim that even two thirds of what I watch is worth watching, I would be lying. But even conceding the hours I waste, there are so many good things, even great things, that I would otherwise never have seen, had I not decided to just flip through the channels, had I chosen not to waste all this money on HBO and Showtime and the rest. And just when I begin to think life too short to watch so much television, I happen on something wonderful, like Tell Them Anything You Want: A Portrait of Maurice Sendak. Filmmakers Lance Bangs and Spike Jonze made this documentary after talking and working with the great writer and illustrator of children's books, as Jonze adapted Sendak's early masterpiece, Where the Wild Things Are as a film. I've yet to see the movie. It does look rather wonderful, and the reviews I've read have all been good, but had Jonze done nothing else for Sendak but be his friend and make this little documentary portrait, I would be grateful to him.

Maurice Sendak is not an easy man. He is not easy in himself and he can not be easy to know. At eighty, alone after the death of his partner of fifty years, preoccupied always with death, the old man can not have been an easy friend to make, and yet the film Bangs & Jonze made is suffused with genuine affection, always careful of Sendak's feelings, and focused as much or more on relating the truth of the great artist's loves, for his friend and caretaker, for his late partner, his brother and sister, his great editor and champion, his dogs and his art, as on his bitterness at having outlived so many people he's loved and his disappointment in himself and his work. In the film, Sendak claims, more than once, to now be only waiting for death, but he still works, he still draws and paints, and when pushed he admits that another ten years might suit his purposes after all. "So much still to do," he says, and in that is the echo of every great artist at the end of life, and in his pleasure at "all the colors" seen through the window of his studio in his Connecticut home, there is a note of joy that assuages, without dismissing, his darker moods.

The most powerful part of the documentary comes in a long segment when Sendak relates the genesis of his most beautiful book, Outside Over There, and how in it he was able to pay tribute to his beloved older sister, and deal creatively with his preoccupation, since the age of two, with a horrifying headline and photograph glimpsed in a newspaper. It is an amazing story that adds much to my appreciation of his most beautiful book.

The film is full of charming things as well: a proud display of the still working wooden toys he and his older brother made some sixty years ago, Sendak's tribute to his favorite dog, shots of his gnomish figure stumping happily through a beautiful, Connecticut Autumn, in the good company of his latest, patient and faithful pooch.

And he is quite funny. Sardonic and playful in the company of the handsome and talented young filmmakers, Sendak allows himself a degree of foolishness and fun that suggests less the burned out and bitter old man he insists he is, and instead reveals something of the playfulness that has made even his most serious work never less than an enchantment. He allows for silliness in himself and recognizes the need for it in every life. Above all though, Sendak is honest. It is not always a comfortable or comforting thing, honesty, and the maker of children's literature might be forgiven for avoiding it, or at least making it less important than Sendak does. It is his honesty though, as much or more than his invention or skill, that makes his work so special and that will make it endure. Sendak knows this, and in his brighter moments, he revels in being blunt not only about old age and art and his failures, but in acknowledging his successes too. There is a mischievous quality to many, if not all of his darkest pronouncements, and his advice to the filmmakers, and to artists and adults in general when addressing children, "Tell them anything you want, but tell them the truth," is something Sendak can say because he's consistently done just that.

I can't imagine this short film being something I might ever have seen had it not popped up on the television menu. I'm awfully glad it did though. It was wonderful.
Posted by usedbuyer 2.0 at 11:21 PM