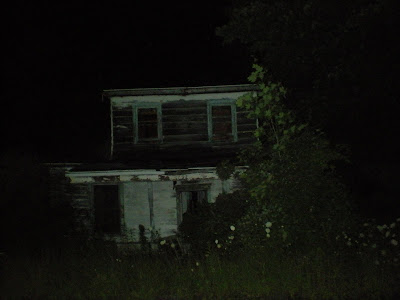 There is an abandoned house, just beyond the trees my father planted forty years ago. No one has lived in that house since I was a child. For a long time, someone kept the house for storage. Boxes filled the windows, though what was in the boxes I never knew. Then the boxes were taken out, the windows broken, and the door came loose from its hinges and stood catawampus, closed with a wedge and locked with a bolted chain. The roof sagged. The small barn behind the house fell in.

When I was little, I stood once with two friends behind what was then just a low hedge and we watched the man who lived in the house as he tended his chickens. We stood amazed as he walked right up to a fat old hen and she took the corn from his palm. Our own chickens would never have done that. The neighbor's hen let him take her up and pet her, let him carry her to a block and sat contentedly when he put her down, stretched out her neck and, with a small hatchet, took off her head. Only then, when her head was off and he'd let loose of the hen did she fly up off the block and run 'round the yard for what seemed to us watching a very long time. None of the other chickens in the yard seemed the least disturbed by this. Amazement turned to consternation, then something like terror when the headless bird seemed to fly directly at us, but we none of us looked away until the hen fell down, her feet still twitching, and the neighbor picked her up by her feet and carried her into his little barn. We tried to remember where the chicken's head had dropped into the grass, but none of us was brave enough to go and look for it. When we noticed the man come into the yard again, still carrying the little hatchet, and he noticed us at last, he lifted a hand to shoo us off and we ran screaming as if he'd brandished the hatchet, as, once we were safe behind my father's barn, we breathlessly told ourselves he had.

That neighbor, as I remember him, lived alone. He may once have had a wife, or a mother, but I do not remember ever having seen anyone about the place but him. He was not the sort of man children got to know, even before we'd watched him kill the chicken. He had no children of his own, that I ever met, and he "kept to himself," as was always said then of lonely people. He was short and thin with a red face and large, red hands and big angry eyes that seemed to skid off you whenever he looked your way, as if in disgust, or as if looking at people, even or specially children, caused him discomfort. He spoke with a stammer, I remember now, and so spoke as little as he might and only when and with whom he needed to, so perhaps what I remember as wrath may have been nothing more than shyness. My father spoke to him, but few others seemed to. I never did. I had decided, I suppose, that he was somehow not to be trusted. I know that I did not like him, that even standing with my father next to him, he frightened me. A ridiculous, childish response to what was I'm sure just a harmless old man, but then, I was just a child. I could not help but remember that hen, and how she'd trusted him. And he always smelled of chickens and stale sweat and of a sourness less easily described, a bitter smell that seems to cling only to country people who live in old, unpainted houses where they walk on dusty old rugs and sit in old, horsehair-chairs with broken seats, and sleep alone in cold iron beds.

Another memory of him, the only other I can claim, is of seeing him on a hot summer day helping beat out a field fire with an Indian blanket. Some old woman, burning her garbage in a barrel, as we did then, hadn't tended the fire and some spark had got loose and fallen in the dry grass. Soon enough, an adjacent hay-field was burning. Everyone ran to the smoke when they saw it, though being daytime and a week day, there were few grown men around, so mostly it was women and a few teenagers who fought the fire. Everyone did this with old rugs and blankets, no one having a hose that could have reached the field and water being too far away to carry. Such fires were common at the end of summer then. Whatever simple thing started such fires: a cigarette tossed from a passing car, kids playing with matches, or some accidental negligence, the fire would move slowly and often undetected for some time through the drying hay, smouldering more than it burned, going to ground in one spot just to smoke up again a yard way. The volunteer firemen always came at last to put the fires out, but usually any real danger of the fire spreading had been kept down with boots and blankets by the time the firemen came. No one seemed to think of any danger but to the fields and the nearest houses, until the firemen came and ordered everyone off. Our silent neighbor was, as I remember, the only man to fight the fire that day until the fire-truck came. I believe my grandmother and I, being nearby at the Grange Hall, for whatever reason that day, beat down the flames with tablecloths we'd soaked at the tap on the side of the Hall. Our neighbor-man yelled -- something I'd otherwise never heard him do -- at all of us to get back, and waded into the smoke himself, stamping the flames under his boots, and smothering the fire with that Indian horse blanket he'd brought. My grandmother and the other women ignored him, as did I. It was too exciting, chasing those little, low flames across the field. When the volunteers came, they ordered him off the field with the rest of us. He seemed reluctant to go, stamping down still smoldering patches of grass as he went. By this time the rest of us were back up on the blacktop road, watching. He was told again to go and went, not joining us on the road, instead just walking off to the end of the field furthest from the firemen and then slowly circling back, watching the fire all the time. I watched him. I saw him smile, not at me but the fire, or so it seemed to me. I'd been enjoying myself, fighting the fire. We'd all been excited by it, I was ashamed to admit to myself at the time, but I thought I saw something else in his smile, something more than excitement, some genuine pleasure in the destruction, and in the ineptitude of the fireman's initial efforts to put it out. His smile may well have just been rueful, but it chilled me at the time. He left before anyone spoke to him.

I must have encountered him again after that, but I don't remember doing so. I've no idea now why he left his house, or if he died there after I'd moved away, or to whom he might have left it, but no one ever lived there after he left. Walking by the ruined house one July night when I was home to visit my parents, I peered into it briefly, by the light of my flashlight, and took a picture. Nothing to suggest it is haunted, though I certainly went no closer to it than the berm of dead-end road that runs in front of it, my curiosity satisfied with that. I don't believe in ghosts, or imagine that our old neighbor, surely dead by now, would have occasion to haunt the place even if he could. The sight of it was sad though, sadder even than I'd remembered it.

The house, along with the trees my father planted forty years ago, will come down soon to make a sweeping drive for the entrance to a new Walmart. No one will miss the house but the rats, I should think, or the raccoons.

I shouldn't think, were I to meet that man's ghost, that I would find even the apparition of him all that frightening, startling surely, but empty, even of memory, like the broken windows. I'd have to assume the ghost was his. There are still, where I grew up, many like him; solitary, less than clean, quiet, furious perhaps, or seeming so, at least in the eyes of children. But then I've no more right to pity his ghost now than I did to fear him then. I did not know the man. Few people, I should think, did.

What frightens me now is not ghosts, or the memory of a red faced old man with a bloody hatchet, or smiling at a fire. What disturbs me now, looking at that abandoned house, is the thought that no one will remember it having been there, in a year's time, or remember the trees my father planted, or anyone that fought that fire in the field that day. Eventually, there will be nobody to remember any of this, save me. It's not ghosts then that frighten me this tonight, but the impermanence, and imperfection, of memory.
Posted by usedbuyer 2.0 at 10:43 PM