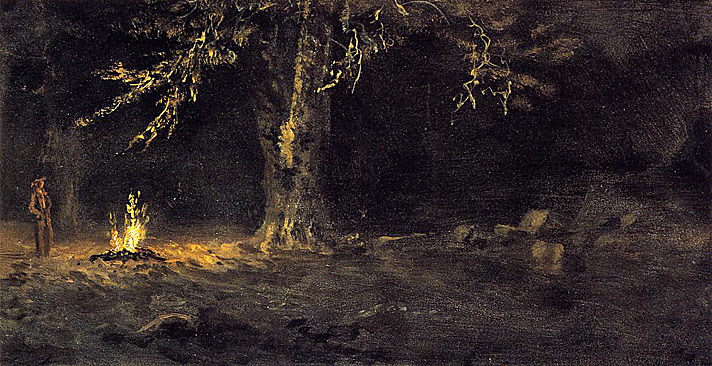 Above the pines the moon was slowly drifting,
The river sang below;
The dim Sierras, far beyond, uplifting
Their minarets of snow.

The roaring camp-fire, with rude humor, painted
The ruddy tints of health
On haggard face and form that drooped and fainted
In the fierce race for wealth;

Till one arose, and from his pack's scant treasure
A hoarded volume drew,
And cards were dropped from hands of listless leisure
To hear the tale anew;

And then, while round them shadows gathered faster,
And as the firelight fell,
He read aloud the book wherein the Master
Had writ of "Little Nell."

Perhaps 'twas boyish fancy,--for the reader
Was youngest of them all,--
But, as he read, from clustering pine and cedar
A silence seemed to fall;

The fir-trees, gathering closer in the shadows,
Listened in every spray,
While the whole camp, with "Nell" on English meadows,
Wandered and lost their way.

And so in mountain solitudes--o'ertaken
As by some spell divine--
Their cares dropped from them like the needles shaken
From out the gusty pine.

Lost is that camp, and wasted all its fire:
And he who wrought that spell?--
Ah, towering pine and stately Kentish spire,
Ye have one tale to tell!

Lost is that camp! but let its fragrant story
Blend with the breath that thrills
With hop-vines' incense all the pensive glory
That fills the Kentish hills.

And on that grave where English oak and holly
And laurel wreaths intwine,
Deem it not all a too presumptuous folly,--
This spray of Western pine!