My first day back at work after ten days vacation and it seems I was missed, which is always gratifying, and that the bookstore went right on without me, which, in its way, was no less so. The desk was cleared at last in my absence, no doubt after much hard work, and so I did not return to the virtual fort of yet to be priced and processed books I left behind. The Used Books "recent arrivals" shelves were restocked. The floor was surprisingly clear of obstacles, the books better arranged than I left them, many interesting books, new and used, had come in while I was away. It was good to be back amidst books for which I will receive no demands for payment and about which I need feel not the slightest remorse when I go home tonight to, at last, begin paying my bills.

One of the great satisfactions of bookselling is in just such impersonal pleasure in the presence of books. I can admire a handsome little volume of Andersen, without wanting it, borrow a copy of the latest novel to read, and possibly write a recommendation for it, without needing to buy it, and handle so many beautiful books, without worrying for a moment that anyone might be eyeing me suspiciously when I put them on the shelf from which I just so casually took them. None of the thousands of books around me everyday at work need ever be mine to be read, admired, recommended. Those I want, I may buy at a discount. Those I don't need, I can, in a way, have as well. It is good to be reminded that I need not own every book I might want and that my job allows me to satisfy, at least in part, my curiosity without completely bankrupting me. After a vacation spent largely in other people's bookstores, it was good to be back in what I can not help but think of as my own.

In the very middle of my day today I had the chance to sit for an hour, in a comfortable chair, at a table covered with beautiful new books, and be told stories. There is an established tradition in the independent book business of publishers' representatives coming 'round now and again, as when the Holidays are neigh upon us, for example, and "presenting" books. Like so many bookselling traditions, these presentations have been of late less frequently practiced; publishers have tightened their promotions-budgets, fewer advance reader's copies and galleys are printed, there are fewer books simply given to booksellers, saddest of all, there are fewer independent bookstores to make such presentations to and fewer reps to make them. Yet this has always been one of the best, and most effective ways, I should think, of dunning new titles into our heads and putting new books into our hands to sell. For every book that has an ad in the pages of a newspaper review (remember those?) and for every famous author, temporary celebrity, talk-show appearance and fleeting reputation in New York or Los Angeles that may bring a customer to a bookstore, there are hundreds of books, if not thousands, that have found readers because a bookseller read them first, and had them from the hands of a dedicated and enthusiastic rep. I wonder that more major publishers do not better remember this. Looking down the long, long lists of first novelists, of the established but too little read writers who in the trade constitute something called "mid-list", of the many beautifully redesigned reissues of classics, and all the very individual, specialized, or simply eccentric nonfiction books published by major American houses each season, it is difficult to appreciate just how such books were intended to be sold, if not first by trusted reps to the buyers and booksellers who still have some substantial influence with the appreciably more select audience of readers who still frequent bookstores in search of just such books. This might well be the only chance of ever sustaining sales of such books a day beyond their launch. A note from an all but anonymous reader, fan or foe, on a commercial, corporate website can still do less I suspect, for example, for a first hardcover novel, than the traditional partnership of reps and booksellers. How many new books have justified even the most modest advance without the support of experienced first readers in the trade? I wonder.

As I said though, just today we were lucky enough to have a visit from just such a professional enthusiast from a major publisher, a rep very much of the old school, I shouldn't think she would much mind me saying as I mean it as a considerable compliment. In an hour's time, with all the resources of an experienced and effective pitcher and true lover of books, and with less otherwise in the way of actual books to distribute than we all remembered from happier days, she raced through a most impressive list, not only of new books, but of the books we would do well to remember from earlier in the year, come Christmas. Titles were told, but whole plots as well, authors were remembered, or introduced, audiences suggested, and not unreasonably, for even the most esoteric or silliest of books. The booksellers at the table were remembered or met, questioned and suggested titles to the taste of each. Notes were made; here for the sports fan, there for the reader of historical fiction, again and again a book was pitched to just the seller likeliest to know the customer for it, that being, remember, the point of the exercise.

It was a little dazzling to watch, and a pleasure to be present while it happened.

And even a seller with such unlikely tastes as my own was not neglected, for in that long list of the pretty, the poignant, the bestsellers to be and delicate first fiction, the artfully made and surprising pointless, the overpriced and the under-appreciated, the good, the bad, the brilliant and the base, there was the face of Abraham Lincoln. When I was still writing this way for another venue, I took it upon myself to review as much as I could of all the great, tumbling mass of new Lincoln books published or reprinted in celebration of The Great Man's bicentennial. I was happy as a duck in mud, to use the less scatological of my father's most common farmyard expressions for contentment. Among the many beautiful, and in some instances important books I had the pleasure of in the heady days leading up to last February, there was a book from that entirely admirable family of collectors, historians and authors, the Kunhardts. Looking for Lincoln: The Making of an American Icon, was a fabulous, big book, full of more original imagery, much of it drawn from generations of collecting by the authors and their ancestors, more good writing, sense and genuine devotion, than in any book on Lincoln I'd ever seen -- and I have seen a lot of Lincoln books. 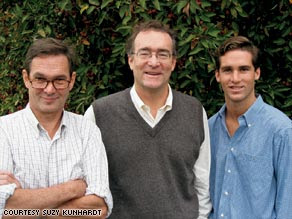 In today's rep presentation, just when I might have been despairing, just a little bit, of seeing anything much I might covet myself, just in other words when I was feeling engaged, entertained but only smugly professional as to my own interest in the books under discussion, out comes a new book on Abraham. Or rather, as the book itself, alas, was nowhere in evidence, out came a promotional brochure of same. Disappointing, but understandable. Still, that flimsy was enough. Lincoln, Life-Size, by Philip Kunhardt III, Peter Kunhardt, & Peter Kunhardt, Jr., will reproduce, with appropriate quotations and history for each, all the known portraits of Abraham Lincoln. Perhaps no face in history has left a better record of the cost of participation in the great and horrible events of modern times. It is a devastating, and deeply moving experience, even if only in preview today, to see the American Civil War, etched in just this one ugly, noble face, reflected in these surprisingly gentle eyes. The first American President to appreciate, and exploit, the power of his own image, Lincoln portraiture is the subject of much study these days, and I can think of no better men to produce the definitive visual record than these authors. 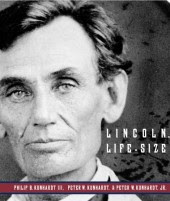 Lincoln, Life-Size then was just today pitched at just the right clerk, by a damnably clever rep from Random House, and that is how such books are sold, remember, even after the anticipated discussion on CNN, all the possible "reviews" in the glossy magazines, and the no doubt brief burst of forthcoming promotion in the wider media.

Considering the sorry state of my present finances after my giddy expenditures while on the admittedly modest spree that was my book-buying vacation with my dearest friend, R., I will have to wait to even see the book proper now until it arrives to be sold at the store, and even longer before I can afford to buy the thing at a retail price of fifty bucks, but...