A Boy's Own Favorites 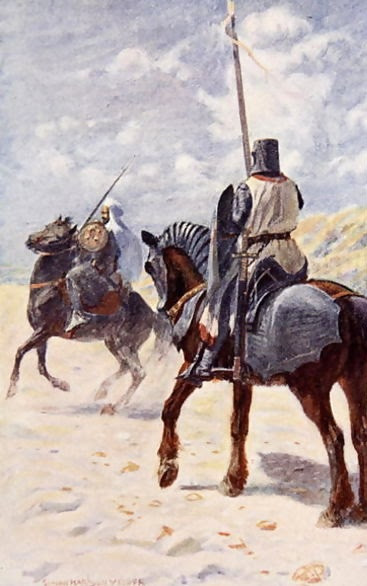 Maybe it was because I had such a good time chattering books with my friend for the ten days he was up visiting. Perhaps any ten days away from the bookstore, without even the excuse of such good company might have left me no less giddy when I came back to work. Mine is a garrulous personality. I enjoy people, conversation, and almost all talk of books. Working in a bookstore then, some effort is required to shut me up. But I have learned to observe the constraints of commerce and chat customers, hopefully, only up to the point of purchase. For whatever reason though, I have yet to settle. My more usual manner eludes me. I found myself talking far past the necessity with customers at the cash register. I answered questions with an alarming honesty. (Had I read the new Dan Brown? Oh, dear.) Nothing irredeemable, you understand, but hardly the smooth efficiency expected of a clerk and cashier. And given the opportunity to make a recommendation, I took it.

My customer was the kind of mild, intellectual reader of fantasy fiction with whom I usually have little direct contact. I am seldom on the second floor for long, and almost never at the end of the room where the Science Fiction & Fantasy Section is. The familiars there are no more likely to stray from it than I am to stray into it. It was unusual then to have one of them approach the general information counter and ask for a recommendation. It was even less likely that I would be the bookseller to volunteer. But something in the manner of this man's question suggested a willingness to read beyond his genre, always an interesting challenge for a bookseller, and when queried, he espoused an interest in history and historical fiction and we were off. Beyond the fantasies of Terry Brooks et al., he had read and enjoyed all of Bernard Cornwell's novels about Napoleonic Wars, and the heroics of rifleman Richard Sharpe. He knew of, but had read less, of Patrick O'Brian, finding the sea a less congenial element.

Now what intrigued me about this reader was that his knowledge of literature, while far more extensive than my own within his preferred categories of fiction, went no further back than the last quarter of the last century. Understandable, considering his age -- I would guess he was in his late twenties -- and his profession, which had not required much in the way of the study of literary history. His favorite writer, he told me, was George R. R. Martin. That was what told me I had a chance. Anyone for whom that name is unfamiliar should try dropping it among Science Fiction and Fantasy readers of the younger generation, just to see how high one's stock rises as a result. Martin made his name writing the kind of serious-minded adventure fantasies that owe as much to comic books, military history and television action shows as they do to Tolkien. Over the years, Martin has written and edited anthologies of some of what I am assured by fans is the very best of martial fantasy. His heroes are troubled souls, existentialists in uniform, but no less likely to fight, and be killed, for that. Action, relentless and described in masterful and believable military detail, draws his readers along through one fantastic confrontation with melancholy and mayhem after another. His ongoing (and aren't they all, nowadays?) fantasy epic, A Song of Ice and Fire, is widely accepted as the best of its kind to date.

Just here, a confession. My knowledge of George R. R. Martin is almost all secondhand. I could not read the one novel I tried. Beyond the affectation of exotic proper and place names, de rigueur in the genre, and impossible for me to take seriously, I could not get past the author's boyish delight in, and to my mind, affected modern despair of war. There is always, in these contemporary masculine fantasies, more than a suggestion childish viciousness; a willingness to invent battles for the fun of fighting them, of imagining empires just to set them at odds, to set up tin soldiers, just to knock them down. Whatever the novelistic innovations in psychology and motivation adopted into genre from the literary fiction of the past century and a half, at heart, these fantasies seem resolutely to never grow up. The consequences of violence are accepted now: heroes die, wars are lost, innocents suffer, but little point is made of all this beyond a rather gloomy and shallow acceptance of the perpetual motion of masculine violence: imaginary kingdoms rise and fall, men and monsters are set at odds, etc., etc., and on it all just spins and spins. The systems of honor, servility and nobility being largely discredited by the serious study in recent times of the actual ramifications of colonialism, imperialism and militarism, the writers of bully fiction have been left without much to justify their triumphal epics, and their heroes, in consequence, have have been reduced to cynicism and an almost comically narrow march across the razor's edge between burlesque and a unhappy reversion to the quaint and antique.

Martin has acknowledged a debt to Walter Scott's Ivanhoe, and in this I saw my chance and took it. Had my customer ever read Sir Walter Scott? Alexandre Dumas père? He had not. Oh! Here then was my opportunity to introduce him to the originals. Walter Scott invented the modern romance, made the modern hero, wrote better and at length, and believed sincerely in almost every story he wrote. If the Scots can be a burden to the contemporary reader, why not then try one of his English settings? The quality of language, the depth of feeling, the historical detail, should all appeal to any reader of historical fiction, fantasy or otherwise. And then there is the greatest of Scott's sons, the magnificent Dumas! Like most Americans, my customer knows the Musketeers only in their youth, by way of abridgments, cartoons and movies. Fantasy readers love long stories, and nearly no one ever wrote at greater length than Dumas. The Musketeers are traced, over book after book, from glory down to age and resignation. There is no better adventure, with no more touching conclusion, than Dumas' great series. Scott and Dumas were not burdened by history but rather reveled in it, in an innocence perhaps no longer possible, but all the more moving and rich for that. And their conclusions as to the efficacy of glory, particularly in Dumas, can be startling to the contemporary reader.

And so I gushed, and pushed books into my customer's hands, and chattered merrily about the unparalleled invention and excitement of the true romantics, of the pleasures to be found only in the first and best things of their kind, of real history, mixed with real art, and of the adult wisdom to be had from the best boy's books. Such books lead readers to history, actual, recorded human history, to real battles, real loses, real heroes, and heroines, and to a real understanding of friendship, and history, fatalism and honor, humanity and genuine humility, rather than the escape from reality proffered by even the accomplished masters of modern fantasy and pastiche. I overwhelmed the poor man with my enthusiasm. He left with one book at least from the stack I'd made him carry behind me.

A business, even a bookstore, can't afford that kind of rambling too often. Too much to be done elsewhere. And it is not really nice to use such a nice man so, just to hear myself talk. But what fun it was! And for all I know, he really might enjoy The Black Tulip, or Quentin Durward or The Talisman. He might even venture again out of the Fantasy aisles, if I haven't scared the poor soul away.
Posted by usedbuyer 2.0 at 11:03 AM