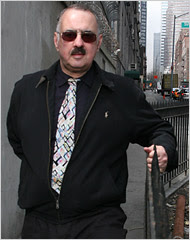 Years ago, when I worked off the sales floor doing publisher returns, I kept candy at my desk, whatever was on sale at Bartell's Drug Store, up the block. Coworkers would come by my desk, bringing me books to return, to chat, or because it was widely known that there was in fact, free candy at the Returns Desk. It might have seemed like pandering, because it was. "Would you like a piece of candy?" (-- "Hi there, stranger. Like me!" classic fat kid thinking. Works too.)

"An open bag of M&Ms is an invitation to sin."

I kept that note posted on a cork board for many years. Words to live by, no?

Now I keep no candy at the Used Books Desk, at least not in a visible place. Too public. One doesn't need to make that many friends.

But, because the Buying Desk is right off the lobby, I look out every day at tables and tables of Bargain Books; publishers' clearance, remainders, reprints... for a bibliophile, this is very much the ethical equivalent of an open bag of M&Ms. I try very hard to ignore these books every day. I have, for example, made myself pass by all the lovely Lincoln hardcovers we've been getting in for the Bicentennial. I do not need to own another book about Lincoln, even at $7.98. My dears, it's dieting while working behind the dessert table at a smorgasbord.

But some things can not, and ought not be ignored. Ethan Mordden is a writer I've enjoyed since his serial stories appeared in the long-gone Christopher Street Magazine. He's marvelous. Ethan Mordden, you see, is Gay New York. That's right. All of it in one mustached fag. In addition to the "Buddies Stories" and his other fiction, for a decade or more, he's been producing a marvelous history of the American Musical Comedy, each volume deliciously reviewing a decade on the Broadway stage. Pure gay goodness. I bought and greedily gobbled each volume as they came out. But his last, The Happiest Corpse I've Ever Seen: The Last 25 Years of the Broadway Musical, was I understood the last. Then today I spotted, on the Bargain Table, marred only by an ugly black remainder mark of the top page-edge, All that Glittered: The Golden Age of Drama on Broadway 1919 - 1959. Not fair, I tell you, an eclair right there calling to my sugar-starved greed. I've been so good; reading serious fiction, quotable essays, The New York Review of Books, freaking Bronte, for heaven's sake, all to avoid writing about trivial nonsense on this blog. (--"Hi there, stranger. Like me!")

I broke. $6.98. I will not be rereading anymore of my Jeanette Winterson for the Seattle Gay & Lesbian Book Club tonight. Just dessert for me, thank you.
Posted by usedbuyer 2.0 at 11:13 AM