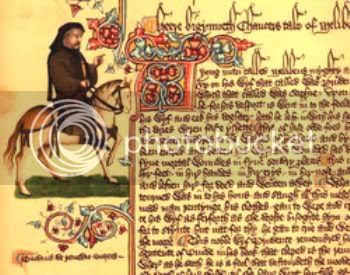 My dearest friend, R. is a poet and a scholar. He was the perfect companion when A. & I took our one and only trip to date to Europe. While A. went sporting on Saville Row, my friend R. and I haunted the bookshops. While A. inspected the tomb of Queen Bess, R. stood with me elsewhere in the Abbey and looked with wet eyes at the tiny box said to hold the bones of the founder of our literature. More than once he has tried to make me see all the good in Geoffrey Chaucer. From memory, R. can recite, in what I assume to be a perfect, burring rendition, the famous prologue:

"Whan that Aprill with his shoures soote
The droghte of March hath perced to the roote,
And bathed every veyne in swich licour
Of which vertu engendred is the flour..."

I have tried before, but never managed Chaucer in any but the Tales done-over by Dryden and the flat prose of a "Chaucer for the modern reader." R. looks at me with pity from the photo above my desk as I confess this.

From the ongoing slaughter of innocents which is the February clearance sale, I just today rescued what I suspect to be a treasure. A New York Times obituary dated only May 11th, 1994 tells me that biographer and children's writer and illustrator Marchette Chute died that year at 84. She seems to have few other references made to her online, other than notices of her books for sale, and various genealogical tracings -- she came of a clan of writers and scholars it seems. I can find no photograph. In my hands tonight though I hold Geoffrey Chaucer of England, written & illustrated by Marchette Chute. Priced at only $3.99 for a good, clean hardcover, this book went unclaimed on our shelves for the better part of two years. Well, I decided to take Marchette's Geoffrey home with me tonight, based on it's attractive and well preserved dustjacket, illustration by the late Mz. Chute, and on the footnote quoted in today's Daily Dose. This was Chute's first biography, published in 1946. My copy is a twelfth printing, from November 1966. That says something more for the book, that twelfth printing, nearly twenty years after it's first publication. Many years ago, caught without another book on a trip, I bought a tatty paperback of Ben Johnson of Westminster by the same author for, as I remember it, fifty cents. It was a delightful book; soundly reasoned, lively and well written, popular biography as it was once written for the common reader. I read more Ben Johnson than I might ever have done otherwise because of that good little book.

"When Geoffrey's father, John Chaucer, was not yet fourteen, he was kidnapped by his Aunt Agnes." That being the first line of Chute's biography, I realized on reading it that I had found again an old and trustworthy friend.

Perhaps the late Marchette Chute can do what sweet R. has for so many years failed to do and bring me before Chaucer's tomb with something more than respectful silence. Perhaps a biography, written when narrative need not be sacrificed to theory, or history told without a smile, a biography snatched at the very last before clearance and disappearance, may bring me back to Chaucer. If she succeeds, R. will be, I know, so happy for me.
Posted by usedbuyer 2.0 at 12:45 AM