A New King (temporarily) In the Cave 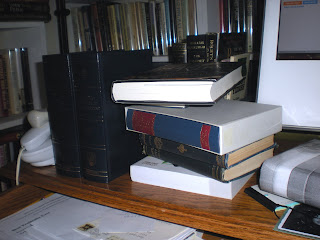 Tonight I had to move five books from my desk just to see the computer screen. This is typical, both of my present state of mind, and of my habitual untidiness. I might want Heinrich Heine later, or Dryden, or Woodforde, or the O'Reilly computer book I bought with great resolve but can not understand. Honestly though, everything here on my desk is here on my desk because I had cause to want it, today or a week ago, whenever it was that I did, and, as I so seldom can be bothered to put anything back where it ought to go once I've done with it for the night, the moment, or, in the instance of the O'Reilly book, in
all likelihood, forever, here it will stay until displaced by some other book, or until the cleaners come because we're having guests. We seldom have guests. As I'm home with the mumps, we are unlikely to have any visitors soon, save from the Health Department. (They seem to have taken a disquieting interest in me and my mumps, by the way, sending a car to pick up my blood sample from my doctor today. I do feel ever so special, in a creepy way. Perhaps I should tidy up, in case the men in hazmat suits are just around the corner? Will photos of my library, and this entry be used on the news to show just how precipitous was the zero-patient's decline into incoherence, immediately post-diagnosis? I will practise John Hurt's cornered scream from The Elephant Man, just in case I'm afforded a close-up before being spirited away to the CDC: "I am a human being! An indifferent housekeeper, and somewhat slovenly in my appearance since becoming ill, I admit, but I am Not an animal!") Whatever my intentions, owning these books means I have the use of them -- when I can remember where they are -- anytime I choose. Mine is not so much a library then, lacking as it does a proper purpose or any but the most rudimentary organization, so much as it is a private hoard. I sit in the pirate's cave, atop the miser's pile, my uncounted treasure spilling all about me.

I suppose my subject here, to the extent I can be said to have one, is my library/hoard, the relation of book to book and books to me, and the ways and means by which my books have come into my life, into this room, and onto my desk. Working in a bookstore, I have access to entirely too many books, and I only too obviously have entirely too little self restraint. I have only to look around me for proof. True, all but two of the books on my desk just now came from Magus, or some other used bookshop. The computer book I'll never use I bought at full price, minus my employee discount, but atop the lot sits a remainder; a book sold off by its publisher to be got rid of, and sold in the bookstore at a dizzying discount when compared to its original price. The greatest danger in the bookstore to me is, as I've mentioned here before, the Bargain Books tables the length and breadth of the bookstore's lobby. History, biography, science... all those lovely hardcover books, marred only by a black Sharpie dot, or even, when I'm specially lucky, unmarked, and all priced to tempt the poorest book-obsessive. My manager, M., is also the remainder books buyer, and he is a devil. He knows just what will tempt impecunious but acquisitive magpies like me. Damn and bless him. History most often snags me.

The Fears of Henry IV: The Life of England's Self-Made King, by Ian Mortimer, a handsome British book, on a subject largely unknown to me otherwise than in Shakespeare, is the latest prize from those damned Bargain tables to find its way into the cave and onto my desk. Read only to page 75 to date, it sits now waiting to be picked up again from the stack and carried off to my sick-bed. I know just why it caught me, I've been reading Marchette Chute's biography of Chaucer, saved from a Clearance Sale, and this other is quite serious history on the same period. And I bought the Mortimer book because it is a handsome brute of a book, read well at lunch one day, and seemed, somehow, necessary in that moment of temptation. As in so many moments of temptation, I yielded. Now, here it is.

In an earlier post, I praised Margaret Lane for serving her biographical subjects without dismissing her predecessors. Mr. Mortimer's introduction, now I look at it again, might be the model of exactly what Lane didn't do, as he dispatches his rivals in it, one by one, as his Henry dispatched his; enemies and otherwise, they all go to the block. I do not say Mortimer is unjustified in this, or that Henry IV was for that matter, as I have never read the books or authors disposed of in this way, or needed to assert so strong a claim to either expertise or the throne of England. I trust that King and biographer were both well within their rights. And Mortimer is, after all, not writing of gentle times or of a gentle subject, as Lane and Gaskell were. Mortimer is telling the story of one bloody great king, from the look of him by page 75, and a certain bloody-mindedness would seem to serve his subject admirably. Perhaps that explains why I've nearly finished the Chute book, and read but so far in the Mortimer. One tells the story of a man, contemporary to the King, but otherwise unlike him to the extent of having given to our Language it's first masterpiece, while repeatedly, habitually and amusingly remaining deprecatory of his own considerable intellect, his person and his talents. Geoffrey Chaucer is a delightful companion, as met in Chute's biography. Henry IV, as met at least in Mortimer's biography, is a right bastard, however impeccable his lineage. Which would be likelier to be a welcome companion to me as I suffer with the mumps? Which would be the better friend to my future reading? Which book has the ring of real treasure to it? Which is likelier to find a permanent place in my cave?

It is no reflection on the value of Mortimer's research, or on the felicities of his style, to say that, like so much of the history and biography that tempt me to take them up from off the Bargain table, I ought to have put his book right back after my lunch. Instead, it may be read again -- after all, it is right here -- but ultimately, like so many books I've bought on impulse, it will probably end up in a box, waiting for a trip to Bellingham, to be sold for something likelier to be wanted again hereafter. That is, if it doesn't end up at the bottom of some stack, undisturbed for years. And so it goes.
Posted by usedbuyer 2.0 at 10:31 PM