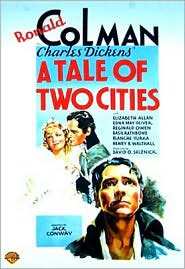 And so I end my convalescence with the last of the movies I taped, and I'm glad of my choice, if not of my return to work, and the clearancing of unsold stock, tomorrow. A Tale of Two Cities, from 1935, starring the truly extraordinary Ronald Coleman as Sydney Carton and the exquisite Elizabeth Allan as Lucie Manette. There have been many versions of this Tale, but none comes close to spectacle and size of this, and none was ever led by a better actor, more perfectly cast than Coleman. He is riveting in his every scene. His handsome face, freed of his signature pencil mustache, is beautifully expressive, his voice unmistakable, but here, used to powerful effect; carefully modulated, less clipped, full of drunk self-loathing one moment, then hilariously tart the next, and, in his final transformation from cynic to sacrifice, genuinely moving.

As with other great films of the period, the supporting players are uniformly first rate, though none could be better than the grand Edna May Oliver as Miss Pross. What other American actress, from her time or since, was ever so perfectly suited to be Aunt Betsey, Pross, Lady Catherine de Bourgh? Would she'd had a crack at Lady Bracknell! She had the face of a supercilious old mare, a strong tendency to mug, and a voice like a hot tea kettle, and she is simply delightful in every movie, good or bad that she ever made. When wonderful Blanche Yurka as the malevolent Madame DeFarge tries to pursue her victims through the house, and Pross bars the door, piping "I am a Briton!" Edna May Oliver is as grand as any Dame that ever held a spear and shield.

But this is Coleman's picture. He fought for the role, wanting to play it for years, and his devotion to the text, and his skill in playing, have never been bettered. When I read Dickens' novel, it will always be Coleman's voice I hear on that famous last page,