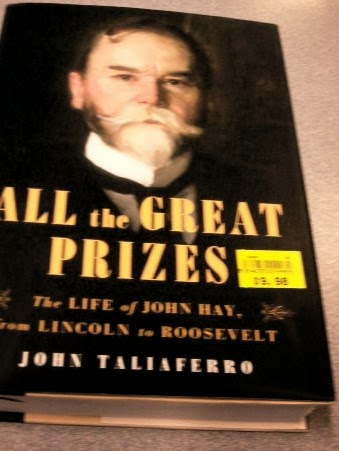 Everybody loves a bargain.  I admit, the first thing I look for in a retail bookstore are the bargain signs.  But now, pleased as I usually am personally to find affordable hardcover editions of interesting books, there are some bargains nowadays that simply confuse and depress me.

Here's an unhappy indication of the state of things, I must say.  Less than a year ago -- May 14th, 2013 to be precise -- All the Great Prizes: The Life of John Hay, from Lincoln to Roosevelt, by John Taliaferro was published in hardcover by Simon and Schuster.  The retail price was $35.00.  The book was widely and respectfully reviewed, including a somewhat mixed notice in the Washington Post and good one from historical novelist Thomas Mallon in the New York Times.  John Taliaferro is the author of four previous books, including well reviewed and popular biographies of the American cowboy painter, Charles M. Russell, and another of Edgar Rice Burroughs.  We sold this new biography at the bookstore where I work.  In fact, we still have a hardcover copy on the shelf.  The paperback edition is scheduled to be released on May 27th of this year.  A year and a day, basically, that's how long a hardcover book now seems to have to sell.  All of which would seem a perfectly predictable progression in these all too hectic times, were it not for the arrival, in advance of the paperback, of a remainder hardcover. 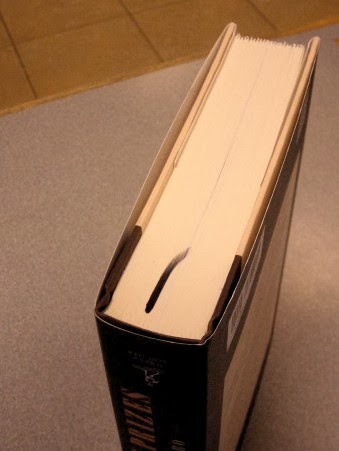 What now?  Not the only example either.  A recent prize-winning work of nonfiction showed up in paperback just before Christmas.  The subject was western American history.  The hardcover had sold well for us, and the paperback looked to do the same.  (They don't always, but some people do wait for the less expensive paperbacks.)  We featured the new paperback in our Christmas display.  Turned out our bargain buyer had already bought not only copies of the remaindered hardcover, but remaindered copies of the new paperback edition as well, in advance of the paperback's actually release date!  (We bought lots of the bargain copies, but we did not did not put them out for the Holidays.)

Then there was the hardcover edition of Bill Clinton's memoirs a few years back that showed up as a bargain book everywhere before the ink was dry on the new paperbacks and pretty effectively killed the paperback dead.  At the time, everybody I knew in the book business professed to be shocked, even if we none of us felt the least surprise that a) that book was headed the way of all such political memoirs, the remainder-tables or b) that the publisher would seem to have been, shall we say, overly optimistic as to the size of the audience for all 900+ pages of Bill.

Just a bit of anecdotal history might not be amiss here.  Remainders, like the poor, are always with us.  I won't trouble my fellow bibliophiles with all the sad stories of Fitzgerald's first edition of The Rubaiyat of Omar Khayyam found in a bargain bin by Browning, was it? or the pulped first editions of Moby Dick, etc.  But, to play the old elephant, I remember when it took months at the very least and more often years for publishers to off-load their remaining, unsold stock -- hence, "remainders,."  New, or at least unread books, offered by bookstores to their customers as bargain books has always been part of the business then, but never so much so as now.  It's actually not all that long ago that the hardcover editions of most books remained in print and available to be purchased at full-price well after the same had been published as paperbacks.  (One of the real refinements of being a book-collector in even a modest way, back in the day was waiting to see if a book might ever be remaindered at all.)

Remainders themselves looked very different, back when I started buying them myself.  Before I even knew what they were, I would occasionally buy books with a small stamp on the bottom page-edge; a Random House colophon, or little pictograph of, yes, a rather random house, for example, or more commonly, an inky black or blue star.  It's only been since I've been in the business myself that the slovenly slash with a marker became the industry standard.

There were bookstores, and even one or two national chains like Crown Books, whose business model was founded on the remainder business.  I can still remember a rather flyblown operation in the downtown Pittsburgh of my youth that may have been the first such operation I ever encountered.  I bought my first Proust there, and yes, each volume was stamped with a star on it's bottom.  What I remember mainly about the store though are the mountainous, ill-assorted tables of dusty, dreary academic books, always the same yellowing stacks of crossword puzzle books, and Anais Nin novels in paperback, with a hole-punched circle clipped from the front cover where the original price had been printed.  (That was another convention of the day for remaindering books, and one I can happily say would seem to have disappeared altogether.)

Returns from the once all-powerful chain-bookstores to the publishers unleashed the new era, back in the eighties and nineties.  What publisher could or would want to keep older, or "backlist" titles as they are known in the trade, sitting in warehouses when a quarter or half of their sold stock could come rolling back on them at any time, seemingly all in a week or a day from Barnes and Noble and or Borders, etc.?

Nowadays it seems every major publisher is run more like an entertainment studio, and nearly every hardcover book, novel or nonfiction, is launched like some new movie or television pilot, to sink or sell, bomb or bestseller, basically on the "opening weekend."  Reviews, radio, even more rarely television can send a book up the list, but not even the best reviews or promotion can save a book from being remaindered or destroyed entirely in less than a year now.  56 "customer reviews" on Amazon.com, but still only number 13,016 on the list -- however that works?  Remainder.  Or, pulp.  Done.

I happen to have read something of John Hay.  Anyone with even a passing interest in reading about Abraham Lincoln will inevitably know something of Hay, his secretary and official biographer.  Likewise, read about Theodore Roosevelt and there's John Hay, his Secretary of State.  I've read Hay's letters, because there was a time when I was reading Henry Adams' histories and loads of Adams letters.  I've read more than one biography of Henry Adams, come to that and Hay was his dearest friend.  So, yes I did read John Taliaferro's All the Great Prizes when it came out, a little more than a year ago.  Meant to write a review, but never did.  I genuinely enjoyed the book.  I thought the reviews I read at the time more than a little unfair to the author, as he wrote a very good biography, not the incomplete history of the Republic most of the reviewers seemed to criticize.  (Newspapers and magazines will insist on hiring rivals, historians and academic specialists to review popular biographies, much to my frustration as a reader of same.  Too tedious.  I read history and biography as literature, an admittedly old fashioned notion everywhere but with the reading public, and I do wish such books were more regularly reviewed as such, but that is perhaps a fight for another day.)

My appreciation of this book contributes to my disappointment then in seeing it so quickly consigned to discount and oblivion.  What chance does the paperback edition have really at the admittedly outrageous price of twenty bucks when we are already offering the only slightly defaced hardcover at $9.98?

To my mind, the lesson here should be something to do with publishers offering their wares at more realistic prices from the get, or not insisting that every book find an audience faster than a Fox sitcom, or perhaps, in a more perfect world, returning to some of the values of an earlier model of the business; one not patterned so much after the brothers Weinstein, as the brothers Harper, though that may just be so much nostalgia and moonshine on my part.

All I do know is that I could neither afford the new hardcover, priced thirty-five dollar plus tax, nor look upon the $9.98 remainder as anything other than a disappointing sign of the times.
Posted by usedbuyer 2.0 at 2:33 AM