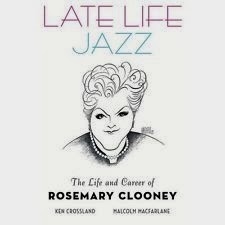 Rosemary Clooney is my favorite singer.  She just is.  Her records are the ones I listen to more than any others, her voice is the one I hear in my head whenever I hear most of the songs I love best.  She's not my only favorite, but she is my favorite.  Dinah Washington I love and respect every bit as much, but if I'm being completely honest, Rosemary's Concord recordings are what I'm taking to the desert island.  (Okay, I'm slipping Dinah Jams into my Robinson Crusoe kit too, but it's my desert island, so sue me.)

I've read everything there's been to read on either lady, including but not limited to their biographies.  I don't much hold with books about singers, though I've certainly read my fair share, but with Clooney and Washington, I just want to know.  They matter to me because their music matters to me, but also because they matter to me as women I admire, artists I can't imagine my life without and because I like them.  To the extent it is possible to know someone I never met, I want to feel that I know them.  In other words, I'm not just an admirer, or a regular listener, I'm a fan.

That said, there are few books I would actually buy just for the notes.  Here's one.  Late Life Jazz: The Life and Career of Rosemary Clooney, by Ken Crossland and Malcolm Macfarlane, new from Oxford University Press, is a book I started on page 186.  Why?  Better than one hundred pages of detailed discography, plus well neigh her every appearance on film and television, in concert and club, and a time-line that includes reviews and trivia and all sorts of fan-thrilling and sometimes little known facts.  I confess, I read my way through all of this supplemental material first with real pleasure and no little surprise, convinced that if the text was half so good it would be wonderful.  It was.  But, like I said, I would buy the book if just for the time-line and the discography.  Where else might one find a note taken from the December 14, 1990 edition of the St. Paul Pioneer Press, recording Rosemary's reaction to having been selected as one of "the six best living singers of American popular song by writer Daniel Okrent" in Life Magazine.  "Asked if she feels she belongs on the list with Frank Sinatra, Carmen McRae, Tony Bennett, Ella Fitzgerald and Mel Torme, Clooney laughs loudly and says, 'If I don't belong in there, you think I'm going to tell.'"  She belonged in there, right at the top.

All the meticulously plotted information in the second half of the book was clearly a labor of love and should appeal to anyone looking to revisit Clooney's career, or complete a collection of her recordings.  I didn't know that I needed to know or to be reminded any of it, or that I needed it organized this way, but now I rather think I wouldn't want to be without.

I'm glad I read all that first.  Made the rest even better.  The text proper is actually something for which I've been waiting; a consideration of my favorite singer as such, with particular emphasis on the second part of her recording and concert career.  At a brisk 186 pages, the biographical detail will again be familiar to the fan, if a bit scant for anyone coming to Clooney for the first time.  But then, this ground has been well covered already by the singer herself in two fairly interchangeable volumes of autobiography, (of the two, I prefer the second, 2000's Girl Singer for being nearer the sound of the lady's conversation in concert and television talk.)  The new book doesn't pretend to be a full life, despite the publisher's subtitle.  It is as a critical work that this new volume will be prized by anyone looking to understand what made Clooney's second act, as it were, fully the equal, if not actually superior to her first.  It is as critics and yes, as fans, that these two boys prove themselves most useful. They do so by arguing convincingly that while by no means the singer she was when young, as an interpreter of popular song and jazz standards, the older Clooney made herself into a better singer, better and better, even as her voice lost it's purity of tone, etc.  They define for me all the qualities in her later career that made her my favorite, and they do this without resorting to either an overly technical analysis of her singing, or by gushing ridiculously as some might -- me, for instance.  They give the lady her due at last and they do it the right way; by quoting the most cogent reviewers at some length and offering the first informed narrative of her late-in-life transformation from the Fifties pop-star into one the greatest singers of the American Songbook to ever record.

In a series of ever better records for the small Concord Jazz label in the Eighties and Nineties, Rosemary Clooney, made herself into something she'd never quite been before, despite having recorded with the likes of Duke Ellington; a serious interpretive artist, a singer's singer, and yes, a jazz singer.  (Though this was a subject of some dispute at the time.  The authors quote among other authorities on the subject the likes of Anita O'Day and Carmen MacRae, both of whom define the title and neither of whom would have considered Clooney as the genuine article.  As Clooney herself is quoted here telling Michael Feinstein when he tried to get Clooney to improvise -- the defining task of a jazz singer by most definitions, including O'Day's -- "Mama don't scat.")  The "life" offered here is by way of explanation of how Clooney got to be what she became despite as much as because of her voice and career.

She was the "girl singer" who started out singing with her sister on the radio, and then with the big bands.  Eventually, perhaps inevitably, she became a movie and television star, and a best-selling recording artist.  She was beautiful, funny, a very charismatic performer, and her voice was a beautiful thing, her musicality, talent and charm were undeniable.  She made some very good records, even a few classic recordings.  If she'd done nothing else after she'd recorded Blue Rose, her album with Duke, she would still be treasured by fans of the swing era and the golden age of American popular music.  Anyone who knows anything of Rosemary Clooney's life-story will know that not all that long after she'd reached the very heights of her career, her life and her singing all went to hell.  She had a break-down.  The assassination of her friend and hero, Bobbie Kennedy famously sent her spirally down.  There were pills, a very public divorce, missed dates, mental illness.  (Important to remember, there was also the triumph of Rock & Roll and the eclipse of jazz as the predominant American musical form.  In the story of any popular singer of her generation, that cultural transformation has to be weighed against the survival of even the biggest talents.  The Beatles ruined more than one recording career.)  She fell.  It took a long time for her to get back up.

She worked because she had to.  She recorded when and where she could.  She toured with some other aging beauties on the nostalgia circuit.  Then Rosemary Clooney did something most "girl singers" couldn't or wouldn't do; she changed.  Unlike most of the ladies who simply survived their era, Rosie worked hard at getting better.  More than anything else, this book is the record of how she did that.  Maybe because she came to accept everything she'd been through, everything that had changed around her, maybe because she still wanted something the others didn't, she worked at what she did best, singing, and she worked with the knowledge she'd acquired and with the experience that came to inform every song she sang.

There are other singers for whom there are partisans of the either the early or late career.  Billie Holiday naturally comes first to mind.  But there, with Billie, the question is one of preference for either the singer or the tragedy, and I don't know that that presents much of a choice.  Clooney is different.  As the authors of this new book are careful to point out, the first career is full of extraordinary beauties, but much of what was best about the voice also expressed something then of the singer's earlier limitations -- and some of the stifling banality of the times. Her singing was pure, precise, beautiful.  It could also be a little cold, particularly when a lot of what she was expected to record and perform was the bland pop of Your Hit Parade and the excruciating novelties of Mitch Miller.  (How she hated that shit!)  What she wanted to be singing was the good stuff.  When she was older, when she was frankly washed up, that was what she decided to do.

In the last two decades of her life, when she'd stopped being a star and fewer and fewer people seemed to care, she could finally sing the songs and the music she loved, sing it the way it was intended to be sung, sing it to the smaller audiences that could really appreciate what she was doing with those songs.  It was only when Rosemary Clooney could be really honest, about her life, and with her music that she became the singer she'd always wanted to be.  I know for a kid in the early Eighties, a kid who had only recently come to appreciate this music, Rosemary Clooney's recordings for Concord Jazz came as something of a revelation.  Here was a woman who trusted the songwriters, most of whom she'd known personally, some of the greatest songwriters this or any other country had ever produced.  She understood the lyrics because she'd lived them.  She trusted the melodies because they didn't require anything else to be beautiful.  She had all the maternal warmth and humor of a real mother, all the control and color in that smoky contralto that only comes from experience.  Most importantly, not unlike Tony Bennett, with whom she alone bares comparison as a performer who reinvented themselves as a true artist, she had the taste of not just a seasoned performer, but of a great musician and student of her craft.  Like Bennett, like Mel Torme, and unlike most of the popular singers of their generation, she got better.

If she never became the jazz singer in the sense of an O'Day or a Sarah Vaughan, let alone a Betty Carter, it was because she was never meant to be that kind of artist.  But what she did do was perform and record the best music of her time, and her time was all about jazz after all, and do it exactly as it was meant to be done, as honestly as it was ever sung.

I wish, if anything, the authors of this excellent little book had taken on the task of writing a full-length, critical biography.  Rosemary deserves as much.  Still, for what it is, this book is a treasure.

And like the best criticism, what this book really did for me was give me even more reason to love those records, and the great woman and artist who made them.  So now, I'm going to listen to them again.
Posted by usedbuyer 2.0 at 12:36 AM