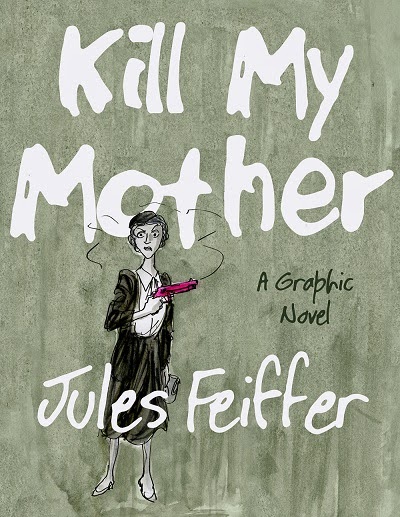 (This one doesn't come out until August.  I got an advance-reader's-copy from the rep.  Couldn't wait.)

Can't dance, don't ask me. I do but I can't, really.  I very much wish I could.  I was asked once at a party if there was anything; fame, fortune, love, for which I would sell my soul.  Didn't hesitate for a second.  "To dance like Fred Astaire," was my answer.

Jules Feiffer's cartoons dance like Fred Astaire.  At eighty-five, still dancing, he's decided to try a new turn, the modern graphic novel.  Kill My Mother is the title and it is unlike anything he's done before, unlike anything period.

Feiffer's been a cartoonist since the age of 16, when he was apprenticed to the great Will Eisner.  He got his first strip at 18.  His cartoons ran in the Village Voice for 42 years.  Been a featured contributor to the New Yorker for nearly as long.  He's written successful plays, screenplays, children's books, all sorts, including novels -- and in 1979, an earlier "novel in pictures" entitled Tantrum.  He drew the pictures for The Phantom Tollbooth.

If I could draw like any living artist, I would draw like Jules Feiffer.  (But I can't.  Don't ask me.)  His line is loose, fluid, kinetic.  I doubt he's ever drawn a straight line, but he's certainly never drawn a lifeless one.  No one since Matisse has had such a seemingly easy command of movement, such economy, such delight in constant motion.  If anything, again like Matisse and unlike so many cartoonists of his generation, Feiffer has only gotten better; more interesting, never lazy, jazzier, funnier, bigger somehow.

This new book is a tribute to the movies of the artist's youth; dipso private eyes, tough guys and saucy dames, movie-hoofers and brave marines. It's after being a film noir, and also one of those game, WWII musical romances, all swirled together in glorious black and white, smoky grey gouache, and watery inks, but told with all the absurd, mock solemnity of a Luis Bunuel.  The plot is a fever-dream of Turner Classic Movies left on all night, violent improbabilities and untrammeled id.

It's a delicious hot mess of a book, and, had anyone other than Jules Feiffer drawn such a thing, I might have loathed it for it's sheer, cranky goof, but he did, so don't.  Instead I can only admire the mind that could make something so beautiful and even moving out of such incongruities -- a Feiffer speciality -- and child-like enthusiasm for mayhem and action.

I loved it.  it's a masterful mess.  I've read it through twice.  I'm keeping it to study.

May you never die, Jules Feiffer!