Remembering the Smile of Julie Roth 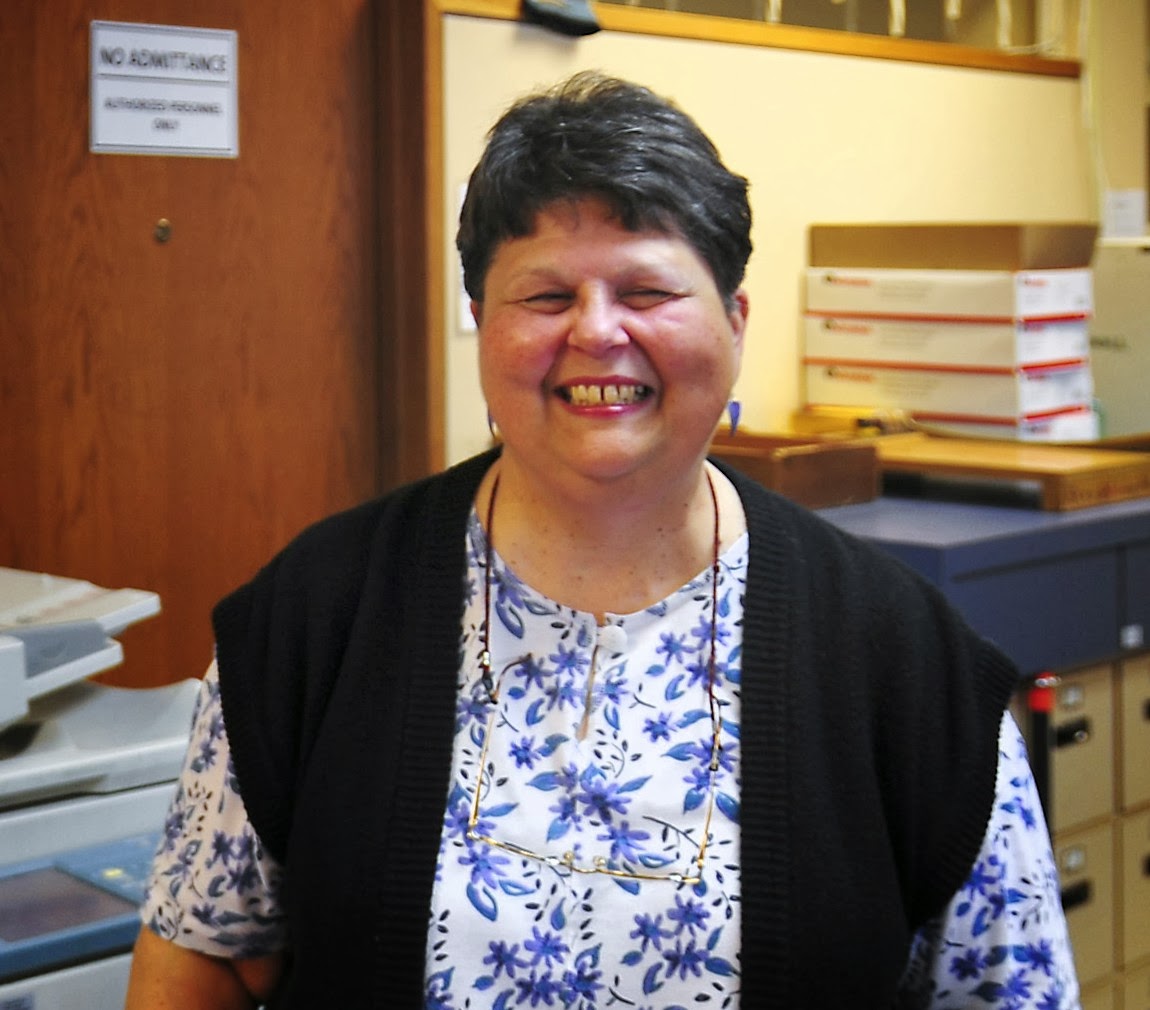 Dickens says somewhere, "I feel an earnest and humble desire, and shall do till I die, to increase the stock of harmless cheerfulness."  What a very old fashioned, very Victorian notion and -- to our modern ears -- a suspiciously modest ambition to have been expressed by so great a novelist.  Dickens' was not a modest talent and he was not averse to celebrity -- it might be said, as Jane Smiley did in her brief biography of the novelist, that he invented it in the modern, literary sense.  Humility then might seem more a matter of convention than conviction from such a source.  Moreover, in our own day, when any pop-rhymester may proclaim his own "genius" as a matter seemingly of course and celebrity and even notoriety would seem to be the standard by which we judge the value of any individual achievement, to say nothing of art or artist, "to increase the stock of harmless cheerfulness" might seem a mystifying ambition, little worthy of note in such an established genius as Dickens save as an example of what we might now call the "humble-brag."

I don't think so, in this case.  Even the darkest novels of Charles Dickens brim with an elemental pleasure in recording every instance of good humor, marking every kindness and occasion of optimism, any small happiness that might arise realistically even in the midst of the most despairing narrative.  It is indicative of the novelist's own enjoyment in life that he could rarely deny even his most disagreeable characters a smile, if only at the expense of their humorlessness, but more to the point, in portraying, for example the very real indignities of poverty and injustice, in even the most debased and intractable circumstances, he allows for unexpected happiness; for the joy in a meal, the loyalty of a friend, the love of a mother, the memory of a lost love, a dance, a joke, a drink, a smile.

For all his talk of Heaven, Dickens was careful to note the rewards in this life to be had from decency, kindness, cheerfulness, harmlessness.  As a satirist and sermonizer, he was particularly ruthless with hypocrites and gave us, in characters like Uriah Heep and Mr. Pecksniff among the most devastating, and funny portraits of the type in all of western literature.  It is worth noting though that all such satires in Dickens are balanced by the good; for the awfulness of the "'umble person" of Uriah Heep, there is the genuinely humble virtues of Ham Peggotty, and Mr. Mell, for every Pecksniff, a Tom Pinch.  (These latter examples are of course the very characters dismissed by some critics as "sentimental" and unrealistic; a charge that to my mind always suggests the narrowness of the critic's acquaintance more than the shallowness of Dickens' observation or emotion.  Anyone who hasn't met a Tom Pinch can't, I think really appreciate the satire in a Pecksniff, suggesting further that the critic may be nearer the Pecksniff himself than not.)  If the poor schoolmaster, Mr. Mells, is made to suffer by public disclosure of  supporting his old mother in the workhouse, and then rescued by Dickens and sent to become a headmaster, "Dr. Mells", in Australia, this seems to me a forgivable example of Dickens affection for his characters rather than any failure to draw them.

Indeed, if Dickens, as every comic novelist before him, did believe himself in part at least obliged to instruct his reader in the rewards of virtue as well as to punish vice, he had no illusion as to the unequal fate of the individual in even his creation.  The blameless sometime die too soon, the good may go unrewarded, or unnoticed, the narrow and the ignorant might avoid enlightenment, let alone their just desserts and die in their beds.

And yet, "to increase the stock of harmless cheerfulness" seems to me admirable on still other grounds than in observing the conventions of the English comic novel and satisfying the reader's sentimental hope of a happy ending.  Dickens believed absolutely in the contribution of "harmless cheerfulness" to the common good.  He believed in the good that might come from a small kindness, from honesty and honest work, from sociability, from laughter.  He believed in the nobility of spirit that might be exampled by the humblest souls, in the most modest way, no matter their circumstances.  He saw this everywhere around him, just as he saw the desperation, injustice and dirt.  He listened for it as closely and reproduced it as faithfully as he did the odd or amusing expression or the characteristic phrase.  He had an ear for kindness.


It is in this notice taken that I am reminded of Dickens today, and feel some obligation to do likewise.

“To compose our character is our duty, not to compose books, and to win, not battles and provinces, but order and tranquility in our conduct. Our great and glorious masterpiece is to live appropriately. All other things, ruling, hoarding, building, are only little appendages and props, at most.”

Again, someone's said it better than I can.  If Dickens has taught me the importance of making note, Montaigne explains the example.

A former coworker of mine, Julie Roth, died on January 6th of this year.  She retired in 2010, after working twenty three years in Payroll and Accounts Payable at the bookstore.  I did not know her well or work with her in the office.  Nevertheless, to me she was a glad presence; I never passed her in a hallway that she didn't give me a smile, never spoke to her that I wasn't made to feel the better for her time.  She laughed easily and often.  She preferred pretty colors and dressed, often as not in light violets and greens, in bright blues, and in sunny shades that matched her beaming grin.  From those who knew her better and worked more closely with her, I know that she did her work well and faithfully and without fuss.  Shy she might have been, but she was a friend to everyone who knew her, and a help to any that asked.  From the official notice of her passing, I learn that she travelled extensively and that she sang enthusiastically with the Sweet Adelines.  Just today, from the younger woman who worked at the desk next to hers until Julie retired, I had the following description,

She came with a friend to hear me read more than once and to catch sight of her smile or hear her light laugh among others gave me courage and the deepest satisfaction.  Even after she had retired and faced the sad recurrence of the grave illness she'd survived at least once before, I never saw her but she laughed and smiled and said not one word to me of her struggles.

Anyone who has ever worked in a big bookstore like the one where I work now, or anywhere requiring the kind of work she did, will have met someone like her; some quiet soul, hard working and honest, with none but good intentions and the natural disposition to enjoy the world, whatever, good and bad might be in it.  On such bright spirits and humble people does the work of the world, and the pleasure we might take in the doing of it, depend.

Obviously, others knew her better: the women she worked with, the ones with whom she sang and travelled, but I may presume to remember her here, and to mark her untimely passing at least insofar as to note that with her has passed out of this world some measure of the "harmless cheerfulness" the world will always need.

Think for just a minute then about the first of those two words, "harmless" and what that means.  Her cheerfulness is easy enough to see in just the photograph above, but that other word is too often and exclusively assumed to be a term of condescension.  I mean it in no such sense, but rather as Dickens employed it, I think.  Imagine what it might mean to have actually done no harm, to be remembered, when we die, as having never given an intentional hurt, to be remembered, so far as I can tell, with a universal affection and respect and to have made people happier for having had, however briefly your acquaintance.  Think of that!

Think what it might mean to be remembered for the "order and tranquility" of one's character, for the constancy of one's friendship, for the respect and affection of even the people one may have known only in passing.  Think of that.

There will be other, better tributes yet to come from those who, as I say, knew her longer and better.  For me, I can think of nothing more to say than that I will miss her smile.  Would that I might be remembered so well and with so happy a thought.
Posted by usedbuyer 2.0 at 10:20 AM