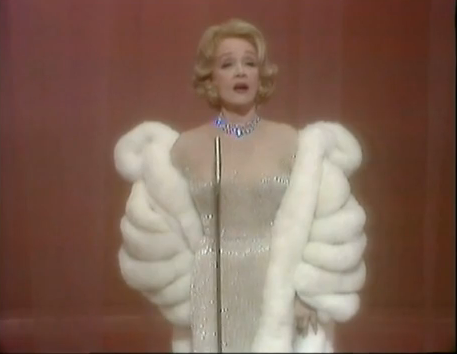 There's a story about Dietrich that I've encountered so many times, in so many variations that I suspect it has to be true.  The aging star walks onstage before a concert.  Doesn't matter where.  Her hair's in a kerchief probably, just wearing slacks, flats.  She surveys the stage, and if the house is unfamiliar she probably does the old actor's trick of testing the floor; a tap, a stomp, maybe she sings a note, listening for where the sound goes, checking for unexpected echos or silence.  Then comes the moment that defines Dietrich.  She checks the light.  She knows every light, every cue and transition, every level.  She talks to the technicians.  She jokes, chats, tells them exactly what she wants.  She likes them, remembers them if she's played the place before.  She's played everywhere.  They love her, just as they did back in the studios, when she was making movies.  She likes anyone who knows their job, respects them, earns their respect by knowing her job and theirs, and how to ask for what she needs to do her job well.  Her job now is being Dietrich.  She is exacting, but not difficult.  The only thing she can't tolerate is incompetence.  She needs everything to be just so, she knows what's required to make it work, to make it magical. That's how it works, that's what will make her Dietrich again; the light just so, the gown, the hair, the music, the smile, the humor, the pathos, the sex.  Above all, I suspect, there is the light.  She knows it, understands it technically, she's as much an expert by now as any of the guys up there on the cat-walks or in the booth, at least when it comes to lighting Dietrich.  She's studied with masters.  She also understands the emotion of it as well, it's power to transform and elevate, to communicate her moods and preserve her beauty.  It's where she lives, in the light, this extraordinary creation of hers, Marlene Dietrich, what Louis Brooks famously and with malice called a "contraption."  So if a light is off by an inch, or a shutter's too low, she tells them and they fix it.

The reason I love that story, however many times I've heard or read it, the reason I think it has to be true, is because whatever she did to make that Marlene Dietrich, that Marlene Dietrich still works.  She's been dead now for a long time.  When her film career faded in the 1950s, she reinvented herself as a cabaret act.  She gave concerts, the concerts that blessedly were filmed, some of them, the concerts that gave rise to the anecdotes about her always finding her light, for roughly two decades.  Ill health and injuries, frankly old age, ended it all in 1975.  By then, it wasn't glamorous any more, not for her.  It was just impossibly hard work.  She retired, disappeared into that apartment in Paris.  She became a voice at the end of a telephone.  She saw no one, even old friends, former lovers, no one.  By the time she died in 1992, aged ninety, no one had seen her in years.  No photographs for years.  No job anymore, not even being Dietrich.

But the "contraption" still works.  Last night I watched the film of her concert in London, 1972.  It's well past the point of her triumphs of the Sixties.  A decade or more since her last decent film role.  They filmed her performance that night with a heavier filter than astronomers use for studying the surface of the sun.  The patter is as familiar as a Jimmy Durante punch-line, and frankly a little stale.  The voice, never much, is by now more whisper and growl than singing.  She barely moves, once she's swept to the microphone in that impossible white fur coat.  We now know she's stitched into that impossible shimmer of a gown, stitched into that wig, and that under the gown, there's a wound on her leg that, despite skin-grafts, has never properly healed.  Of course knowing all that matters not at all.  She's gorgeous.  She's funny.  She's touchingly honest, or at least so practiced as to never fail in her connection with her audience, with the viewer, even now, some forty years later.  It's an alchemical magic, as much hard work, I know, as actual talent.  Still.

Act One is fifteen minutes: it's the story of her life in film, of her songs.  It's all pink, impossibly pretty, light and cheerful, and little abrupt, frankly; the songs seem short, as does her breathing.  She closes with "The Laziest Gal in Town," and it's fun.  Then she walks off, trailing that impossibly white fur.  The lights dim, the stage goes black and she's back for Act Two.  She's abandoned the coat.  She looks naked now, in just that sheer, glittering dress.  It's still a startling effect.  She opens with "When the World Was Young."  There's a increasingly tight spot on that tight, painted face.  That's actually when it happens, with that sentimental ballad.  She acts it rather beautifully; weary, wistful, something like her age.  "Only last July, when the world was young."  She lets her jaw hang open a little, let's the mask just hang there in space for a few seconds as the music ends, the very symbol of tragedy.  Yes, it's a little mannered, choreographed, but she means it, nearly every word.  Maybe she doesn't, but we do and that's what matters.  Then it's all pink again.  She sings her first song in German, her first record, "Johnny," a song "about a girl, on the telephone, calling her man..." and this is Dietrich, the Dietrich of every drag show; the chewed up vowels, the nasal, buzzing growl of sexual energy, the serpentine gestures where there might once have been at least a step or two.  This is the caricaturist's meat.  Doesn't matter a bit.  It's too late by now.  The spell is cast.

Folk songs?  Sure.  Why not?  By now she could be singing nursery rhymes, or "Darktown Strutters' Ball."  She's pulled us into the magic circle.  Everything hereafter feels astonishingly intimate, almost a private conversation.  (The applause feels shocking when it comes, an unwelcome reminder that there were other people there.)

I won't run down the whole program.  Anyone who wants to can go and watch it on You Tube.  Here's the link.

Yes, it's all a little absurd I suppose: the melodramatic antiwar songs, the corseted waist and the tight face, the pop tunes and orchestrations from a very different era to ours -- "boom, boom. boom boomerang baby" -- the septuagenarian sexiness, the mulled lyrics and the humming.  It is camp by now, but I suppose she knew that.  She does the only sensible thing and embraces it when she needs to.  But then, she sing's her pal Piaf's "la Vie en Rose," and, well, I cry.  Not the way Piaf makes me cry.  No one needs to cry for Dietrich.  I cry because I'm watching a very great artist, an artist making something nearly from nothing, from memory, hers and ours, with just a small but practiced voice, a talent, a will, and.. what?  Light?