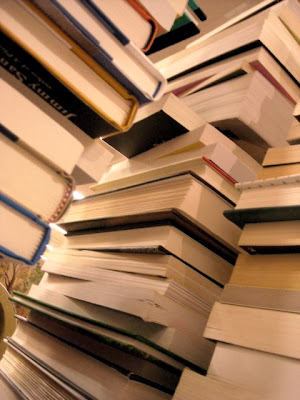 Alone at the Buying Desk again this week.  The other buyer, dear D., is off in the desert working a film festival, as he does this time every year.  (He is a cineaste of considerable knowledge and experience in matters film-festive.  Can't quite call it a "vacation" then when he flies off to ticket and herd, etc.  Still, he seems to enjoy it.  Anyway, he's off the Desk.)  For me, this means trying to keep up until he returns.  Not a bad time of year for this, as January-retail tends to go a bit slack anyway. Does not mean we don't still have books coming in; used books that need buying, priced, cleaned, tagged and sent out to the sales floor to have another fling at it.  That is, blessedly, a constant.  It can however be a bit overwhelming, going it alone for two weeks. 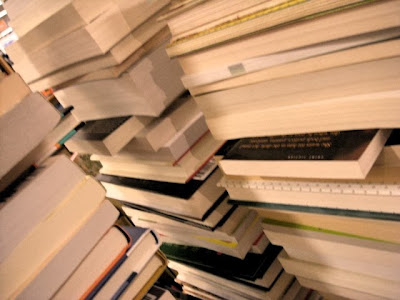 Not that I'm not happy just beavering away most days, by myself.  True, I miss the company, and the support, but a good deal of what one does at this job, one can do alone as easily as not.  Getting things done -- meaning mostly getting through a shelf or two of stock a day so as not to have to start piling things up on the floor -- isn't such an onerous task as all that.  In fact, I've always rather liked the somewhat mindless activity of it all; cleaning, pricing, data-entry, at least on all but the busiest of buying days.  It's just that now there is the added impetus not to fall too far behind, as one wouldn't like to have too much mess about when dear D. returns, tan, fit and frisking, no doubt, to be back at it; tucking into bins of sticky cookbooks, sorting through bag after bag of mangled chapter-books, treasure-hunting amongst the drift and dross of other people's used books. 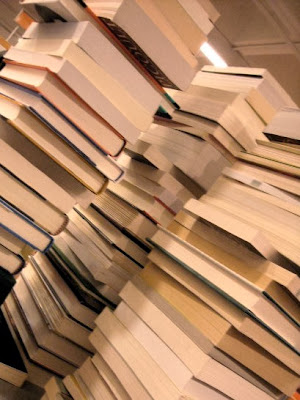 There is a perfectly justifiable pleasure, while tagging, in building book-forts of the kind pictured here, and never more so than when left on one's own all day.  There is a sense in which one's isolation behind even a temporary wall of books is strangely satisfying.  I know it's childish, hiding in plain sight, as it were, and not actually very effective, but still.  Sometimes though, like today, it feels very much like creating some fantastic monk's cell in which the full resources of the great, Borgesian library stretch infinitely up and around, and wherein might be found all the time in the world to read.  Call it, the bibliophile's castle in the air.

The feeling of fantasy only grows as the stacks teeter higher and multiply across the desk.  One forgets, most times, that childhood wonder at the seemingly insignificant stacking of like things, made magically huge just by laying one's face on a table and forcing a perspective fit for canyons, castles and giants somewhere in the clouds above.  I confess, I did just that today; put my head on the desk and let my gaze go up and up, until the top-most books looked to be off at some dizzying height.  There was no one today to observe this behavior, or to wonder if I was taken suddenly ill, or sleepy. Own little world, I was in, for a minute or two there.

I admit, I'd built the books around me into the most impractical arrangement, but then none got knocked over, and I roughly knew what order I'd entered them in, and as there was no one, as I say, to say me nay, I admit, I drifted a bit.

What would actually be in by perfect bunker of books?  Well, many if not most that I already own or to which I already have access.  Certainly, there were probably few enough of the books I entered today I might feel the need of, come eternity.  I do like the idea though of titles unseen, waiting exploration and a wanderer's leisure.  That's rather the definition of the perfect bookstore, come to that.

It seems even my day-dreams tend to books in stacks, no? "In dreams begin responsibilities," Yeats said, I think.
Posted by usedbuyer 2.0 at 8:48 PM