The Test of Affection 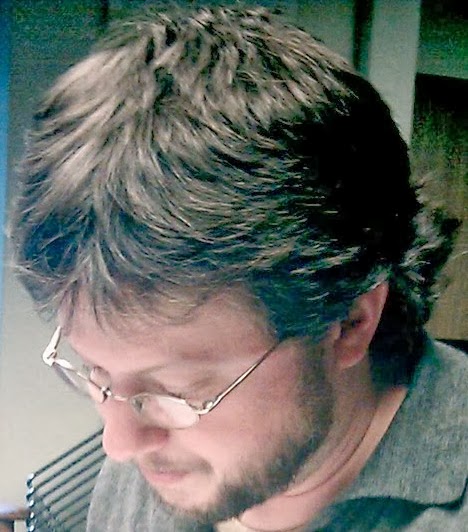 This is the last day at the bookstore for yet another of my friends.  His name is Matthew Simmons.  He's been working there for more than a decade and we've been friends for at least that long.  I will miss him.

When I met him, he was hosting events at the bookstore.  Good looking boy, not yet thirty at the time, very attractive; bright, blushing and clever.  One day he posted a note, a charming confession of certain deficiencies in his reading to date.  He'd finally mastered Moby Dick, I think it was, and had determined to do more in that line; the great unread classics.  In the note, he'd asked his coworkers, a fairly literate bunch as might be imagined, to provide him a list of the books he most needed to read.  Delightful, and absolutely earnest.  As I remember it, it came to quite a list and so far I can remember, he read every book on it.  My nomination was Daisy Ashford's The Young Visiters, or, Mr Salteena's Plan, easily the greatest novel ever written by a nine year old, but hardly required reading.  It was a fatuous suggestion, a not entirely nice poke at a young writer's supposedly "late start."  Matthew read the book.  What's more, he enjoyed it.  And he appreciated my joke more than it, or I, deserved.  Makes my face burn now to think of it.  Nonetheless we became fast friends.

Since then Matthew has become the company's copywriter, an editor and a published author of some reputation.  I've had the privilege of reading what he's written as it's come.  From the first story of his that I read down to his most recent published book, Happy Rock, I have been a fan.  This is of itself odd, despite our now long-established friendship, as Matthew writes, and writes superbly well in a style so unlike anything I might otherwise read as to make my genuine appreciation of his work well neigh miraculous.  The clear inference would be that either my judgement has been clouded by my affection for the writer, or that he is just that good at what he does.  He is just that good at what he does.

What he does is write the most fantastical modern nonsense; witty, elliptical, loopy, but always grounded in an acutely concrete and recognizable, very American, reality.  His is not the sort of thing I would normally read.  Moreover, and most amazingly, in stories seemingly made up of nothing more than long car rides, dreadful metalhead music, dull suburban driveways and thwarted conversations, sometimes with the dead or just the dull-witted, stories with more than sufficient darkness in them, some of them, he manages an elegant play of serious ideas, good humor, and sincere emotion.  No idea how he does it.  None.  He's never written an awkward sentence in his fiction.  His essays and occasional pieces have never been less than delightful.  He's never been cruel.  He never fails to surprise me.  There is just so much we do not have in common, generationally and personally, particularly when it comes to contemporary literature and music, and yet I can honestly say I have happily gone wherever he decided to take me. I look forward to where we'll go next, wherever that might be, god help me.

He has, as it turns out, an exceptional talent, a sound head, a great ear.  He has a good heart.

And now he has a new job.

It isn't the writer I will miss.  What he writes, I'll read.  I will miss his dear face, his bright eyes and ready giggle.  I will miss him popping up -- he does actually seem sometimes to pop -- at my desk on the sales floor, just to say "hello," or to bump me with his dear, shaggy head, like some affectionate cat.  I will miss our conversations on the fly about this and that, about books and whatnot, our jokes and absurdities, our rare shared miseries.  I'll miss the very sight of him.

I wish him of course nothing but good things.  It's time he moved on, time other people and other places had the benefit of him, his talent, his good sense.

When he confided in me that he'd got this new gig and would be gone in a week, I was genuinely happy for him.  I am still.  But miss him I will.  And proud of him I am as well.  What a good writer he's become in just the time I've known him!  What a good man, and a good friend.

(I'm reminded of yet another friend from work, himself now a published novelist, also moved on, largely, to other pursuits and about whom I was not even able at the time he left to write so much as this, as it was just too hard to think of the bookstore and my day without him.   I regret that, though I tried to say something publicly thereafter.  Still.  I determined this time to be a bit less self-pitying and mark the day.)

I admit, I will probably get a bit misty when I see Matthew, later today, for his last day working at the bookstore.  Ridiculous, really, more my sort of thing, I should think, than his, the Byron I'm reminded of.  Such a drama queen, me.   At it's full length it's far too much for the occasion -- nobody's died here, people -- and it is a bit silly, but the first stanza, at least, by way of farewell, then, to ward off some even more maudlin or worse, if sincere, demonstration:

When Friendship or Love
Our sympathies move;
When Truth, in a glance, should appear,
The lips may beguile,
With a dimple or smile,
But the test of affection's a Tear.