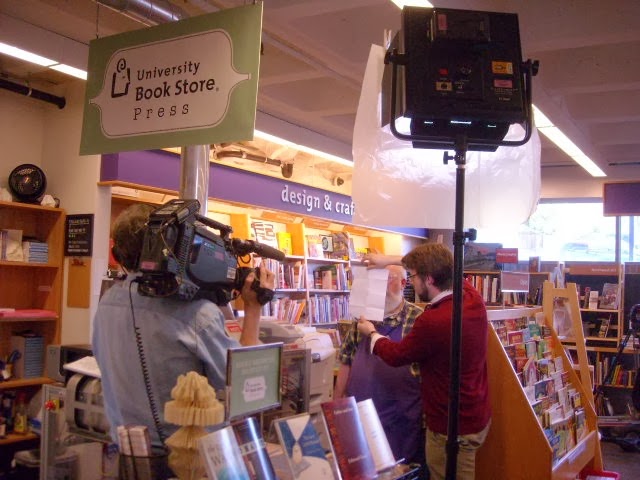 This, it seems, is called a "white test."  I was assured that this is not meant in any way as a comment on how photogenic or otherwise the subject, but rather as a simple way to check the light-levels while filming.  Worth noting, however, that immediately after the sheet of paper was taken away from in front of my face, the director suggested to his assistant that I might need some powder on my giant forehead.  Check.  The cameraman subsequently asked for yet another light dusting, as it seemed the bearded lightbulb was still "glowing" a bit too brightly.  I continued co-operative.

All in a good cause, as they say.  Keep in mind now, this was all in aid of what will ultimately be something like a four minute segment on the bookstore, set to run at some indefinite time in the future, on local access television.  Glad of it.  My contribution, should any of it see broadcast or no, was mostly to do with publishing a book on the Espresso Book Machine.  Earlier in the day they'd shot a segment with a professor from the university who's likewise had an EBM book done through the bookstore where I work.  I had to rehearse catching a copy of The Serial Doodler as it finished printing and dropped down the chute. Bend, dip, lift.  Smile.  The sequence was timed to the actual operation of the machine which meant we had just under a minute from the time the last cut was made until the book dropped.  Rather than print another and another, we practised the shot a few times.  Bend, dip, lift.  Smile.  Went well enough, I think, come the actual shot.

Thereafter I answered some questions on camera; about making a book on the EBM, about buying used books, about hand-selling, about I now know not what.

When I'd answered the question about stocking used books as well as new and reprinted titles, the handsome young man in the bow-tie smiled, said that was fine, and then made a gesture of pressing his palms nearly together and suggested politely that I might use fewer words to say the same thing, please.

The crew also interviewed the company's CEO, and my immediate boss, sweet P., as well.  Dear P. and I agreed, comparing notes well after that neither of us could remember a damned fool thing we'd said, though we were both quite sure we had talked the most awful nonsense.  Other people assured us both that a) we hadn't and b) only idiots and assholes are confident of having said all the right things on camera.  (Thus, presumably, the team at Fox news.)  I was actually more comforted by the knowledge that whatever I may have actually said, very little of it is likely to end up seen.  I simply have to trust that the little that may be will be all the better for having been edited to a fare thee well.

Though it may seem so, this is not yet another entry seeking to establish my claim to the title of Queen of All Media.  I was thrilled to be asked.  I was specially thrilled to be asked about my little book.  The point of the whole exercise though was not to do much with me, but rather with showing that the bookstore is more than textbooks and T-shirts.  That is a noble goal I most heartily endorse.  Any chance to bring home to the students, faculty and staff of the university this truth needs taken.  Any opportunity to communicate our commitment to books and our contribution to making Seattle a literate city is most welcome.  Anything that might bring the people in again, is good.  The store's survived for more than one hundred years.  We're still here.  That's the point.

That is also something like the point of all our recently renewed efforts at social media; blogging, tweeting, "tumbling," etc.  I don't think any of us interviewed for this video, any of us doing more "posting" and the like, have any illusions about these efforts increasing sales or foot-traffic, in the traditional sense, anyway.  Nevertheless, people don't forget so much as they need regular reminding.  Part of the job now, to remind people where the books are, and why books and bookstores and booksellers are still necessary.  Think otherwise at all our peril.

As I might have said on camera, or should have if I didn't, the best way to discover a book is still to be where the books are; new, used, reprinted, rediscovered, recommended, reviewed and right at hand.

We'll have to wait and see if I actually said anything like after they'd dusted my poor ol' empty head.
Posted by usedbuyer 2.0 at 8:03 AM