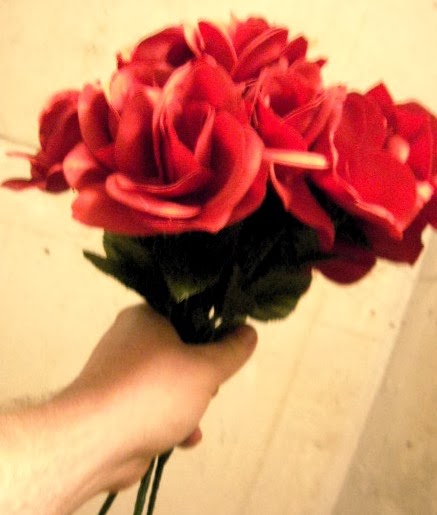 Ah, red.  Everywhere red dust jackets, red book covers, red, red, red -- and a touch of pink.  Red but unread.  And, love!  Everywhere one looks for the next two weeks, there will love be.  You work in a bookstore, you know what I mean.  Even in Seattle where everything these days is blue and green (close as I'm going to get to Super Bowl fever, here or elsewhere,) every book with so much as a vague promise of romance in the title will be culled from the shelves and plunked on a display table.  (I was going to say, "heaped" but those days are sadly done.)  We are such calendrical creatures, are we not, booksellers?  Sure as hothouse-roses in February, the next display must be... St. Valentine's Day! Never quite the exercise in unimaginative retailing that, say, St. Patrick's Day has become -- James Joyce!  Irish Blessings!  Shamrocks!  Home Brewing! -- but it is bad, or sad enough.  I don't know that I'd fuss, if I could still sell a copy of Sonnets from the Portuguese now and again, or if I was sure that The Rosie Project was going to fly off the table this month, but I don't frankly see that happening, at least not because it's February, when readers' fancies turn to romance, or better say, when romantics' fancy turns to reading.  Really?  Does it?

At the bookstore where I work, we do sell fancy chocolate at least, so that's something.

As someone who not only works in a bookstore but prefers a busman's holiday to actual travel, and as someone who accepts books as the perfect gift for any and all occasions, far be it from me to discount the lure of literature as love-token.   I just don't think that the single, annual sale of a copy of Neruda's love poems fully justifies such uninspired use of the space anymore.  (I know.  I know. A sale is a sale.)  Maybe I've just gotten too middle-aged and cynical for hearts and flowers.  Maybe.  And maybe I'm just too old in the business now, but I confess, I am so very weary of the annual retail display rotation.  Feeling just a little broken on that wheel today.

Not that it still can't be done remarkably well.  I work with -- and work for actually, now I come to think of it -- some brilliant young women whose talents, specially for selection and arrangement, can and do make even the most hackneyed displays sparkle with an unexpected wit and irreverence.   Entirely predictable, inoffensive and bland display ideas can, in the right hands, be oh, so subtly undermined and even a Valentine's Day table made interesting by simply introducing an unexpected mix of titles.  Old trick, usually requiring bright young eyes.

But why must it be done at all?  Where is the rule that says red in February?  It would seem that this would be one of those inescapable exercises in met expectations with which retail has always been rife. If there wasn't a display for Valentine's Day, then, and perhaps only then would someone not employed in the bookstore ask, why not?  (To say nothing of the rest of us  working at the Information Desk, who will find a way to like and or dislike pretty much everything that is or is not different about the place from year to year and day to day.  Witness this little exercise in hurrumph.)  Sure as waxy chocolates in a heart-shaped-box, there would be complaints.

I know that as a regular customer in bookstores, new and used, that to which my eye is invariably drawn is almost never what I fully expected to see walking into a bookstore; namely the inevitable seasonal displays with signs reading, "Beach Reads for Summer" or "Turkey Day Cookbooks" and the like.  Can I be the only one who finds such things depressingly stale?  Again, I wouldn't bitch if I could remember the last time I saw somebody or some crowd of somebodies eagerly shopping such displays.

What I do see, and the thing that encourages me, is regular browsers at every display of Staff Recommendations in every bookstore into which I've ever gone.  Likewise, every witty window display or clever table-sign seems to elicit not only admiration, but now and again actual sales.  I've seen readers, young readers at that, transfixed by a display of new books in translation, seen couples and little clusters of friends laughing and discussing a display of "Bad Boyfriend Books" that included Anna Karenina and On the Road.  I still remember a marvelous table display that included cookbooks of the most decadent character, sex and drugs, with a sign on top that read simply "SIN."  I bought Maida Heatter's chocolate baking book off of that one myself.  Still use it, too.

My point being that if, as someone who loves books and bookstores and booksellers as much as I do, if I'm getting more than a little bored with the usual Valentines, so must other people be as well.  That's all.

Now not every display can be oh so clever clever.  There are perfectly viable uses of display space that simply have to happen in almost any general bookstore: new in paperback, the latest nonfiction, bestsellers and the like.  No argument there.  Hell, I'm actually interested each year to see what goes up on the annual Oscars table, just because there's always something I didn't even know had ever been a book.

I just wish we could think outside the heart-shaped-box more often.  In fact, I wish we would just ban the damned things.  Be honest, when was the last time anything good ever came out of one?