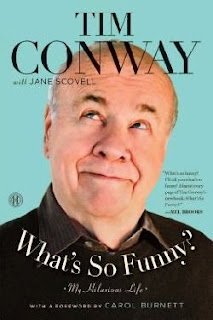 Not a book that really requires a review, quick or otherwise.  And after all, what's to criticize?  In the first place, there's nothing he hasn't already said about his career, and some of his more unfortunate choices, himself, most amusingly, right here in this book, amongst other venues.  Secondly, the gentleman's career has already survived some really devastating criticism, repeated cancellations, and even a bad review from the woman who would eventually become his present wife.  (Took awhile, but now she gets him.  Lucky man.)  And still, on Tim Conway goes.  Still working.   Still making me, and millions of other people laugh. Clearly, while not above bombing, the man is indestructible.

If by some mischance the reader is unacquainted with the work of Mr. Conway, he's still at it, still entertaining people, and then there's the Internet and some lovely boxed sets of The Carol Burnett Show readily available to rectify the deficiency.  (If this applies to you, you'll need to do this right away.  Go on.  I'll wait.)

A book like this is really less the performer's memoirs than an aide de memoire for the rest of us.  Yes, it was lovely meeting here his very sweet mother and dad, and reading something of his childhood in Chagrin Falls, Ohio, his first big break in local radio, etc.  But really, what this book does is provide the reader -- meaning the fan -- with the means to revisit favorite memories of one's own: sketches and characters, from film and television, and the personalities, partners and friends who made all the laughter possible.  In addition to some really funny and unfamiliar stories one might never have known had he not finally written them down in this book -- something for which one can only be too grateful --, the book is also a kind of key to all those memories Conway made with the rest of us, his audience, and with Carol and Harvey Korman, with Ernie Borgnine on McHale's Navy, with Don Knotts and others in a series of Disney films some of us will remember fondly from childhood.

Funnily enough, Conway himself mentions in the book that he and a friend, having told each other the same stories so often, eventually adopted a numerical code for these so that one has only to tell the other, "Number Sixteen," or the like and then they both crack up.

Wonderful story.  Wonderful stories all 'round.  That's the point.  Conway has now entered the time of life once famously described by the late Clifton Fadiman as his "anecdotage," and a lucky thing it is for the rest of us, too.  He tells a lot of stories here.  He has a lot of stories to tell.  He loves practical jokes, and impractical ones as well.  He's pulled any number of unlikely tricks on friends, including dressing up to match the plaid on the walls in his study and waiting for Burnett and his other guests to notice him standing there.  (See the back cover of this book.)  He loves well scripted comedy -- he is a writer, after all -- and improvisation.  It is that last that's made him immortal.  Something like the way he and his pal can make each other laugh by just mentioning a number, I feel I need only write the words, "the dentist sketch," or "the elephant story," and anyone who treasures those moments of real genius will not only smile, but want to watch those performances again.

A confession.  In recent years, when I have had difficult times myself; particularly bad news, problems at work, illness, what have you, more times than I might otherwise admit, I have found that the one thing that will make me forget my troubles for a few minutes, the one thing that will take me well out of myself and let me, in a way, be again the little kid laughing helplessly on the living room floor in front of the television, my folks and family likewise laughing themselves silly around me, the thing that, in it's own, magical way can restore all the joy and innocence of childhood to a few minutes of my more complicated adult life, is watching Tim Conway making Harvey Korman helpless with laughter in a dentist's chair, or cracking up Lyle Waggoner with a hand-puppet of Hitler, singing "I've Been Working on the Railroad."  Incongruous, ridiculous, irrefutably funny stuff, for which I am eternally grateful to Tim Conway.

Glad I got his book too.  Glad of the chance to spend a little more time with him, particularly with Tim and the late Harvey Korman.  (Or should I say, Tim torturing Harvey Korman?  There's a story in the book of Conway convincing his friend to go talk to the pilot of the plane they're on for what is clearly no good reason, and another about getting Korman to invest with him in a race-horse.  Read the book.  Well worth it, trust me.)  What could be better than that?  Loved it!  Made me laugh.

Really, there's only one reason to read this book.  Already knew that.
Posted by usedbuyer 2.0 at 5:21 PM