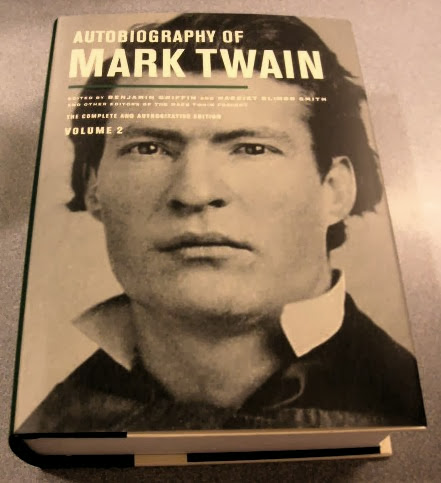 Here's what happened. Back in the winter of 2009, the very clever buyers at the bookstore where I work had the sense to anticipate something of the media frenzy which was coming with the publication of the first volume of The Autobiography Mark Twain, in a new, "complete and authoritative edition."  The book wouldn't come out until the following Spring.  (That's just the way these things traditionally work.  Titles tend to be sold to bookstores before the actual books have been printed.  Most new books are bought for bookstores from nothing but a description in a catalogue and perhaps with the recommendation of a publisher's rep.)  The buyers' order of this "new" Twain was substantial, and considering the size and cost of a new hardcover book by a long-dead author, a little daring.  True, this is probably the most famous American writer who ever lived, but still.  Publication was timed to coincide roughly with the one hundredth anniversary of Twain's death. The buyers were confident that the press-coverage would sell the book.  They were right.  It did.  We sold a lot.

The book was already controversial, well before it ever saw print.  Unlike previous editors of this material, the scholars making this new edition had decided to include every word of Twain's long, haphazard manuscript.  After much study, they had taken the old boy at his word. It was Twain, after all, who had insisted he was reinventing autobiography.   Old, ill and for want of the strength to do much actual writing, it was Twain who sat up in his bed, day after day, rambling over the past and his morning newspaper to a secretary -- actually, a series of secretaries, if I remember that right.  Talk, is what it was, and a lot of it too.  Unlike the previous editors, including the great Bernard DeVoto, who'd had a crack at shaping all this talk into a book, this new crew decided to print a book just as it was, word for word -- and with half again as many notes.  O, so many notes.  Scholars will be scholars.  It was an interesting idea, to edit a manuscript by only adding to it's length.  Not the traditional method.

But then, this manuscript had already generated controversy.  Twain had published some of this material himself.  He had also arranged in his will that this autobiography should only be published one hundred years after his death.  Not an unprecedented arrangement, both establishing that everyone mentioned in the thing would be dead and confirming the artist's confidence -- correct in this case -- that he would still be read one hundred years later.  Ignoring those instructions, his estate had allowed no less than three editions, I think, to be published in the intervening century between his death and this new, complete edition.  Each edition made some headlines.  One of the problems with all the previously published versions was the assumption, at least on the part of the public, and some critics,  that what was being left unpublished was probably pretty controversial stuff, either about Twain himself, his contemporaries, or God.  DeVoto tried to correct these assumptions as best he could in his introduction to his edition, but the suspicion lingered on.  Surely, what was left out had to be even better, naughtier, nastier than what made it in?

Stood to reason, didn't it?  Twain was getting on when he took the project up, and was known to have become a rather prophetic old party; irreligious, cynical, rather acid, and quite lonely after the deaths of his wife and daughter.  He himself had said he intended the book to be published only after 100 years so that he might be free in dictating exactly what he thought without fear of offending anyone still alive as he did so.  Surely then, even DeVeto, working in the mid century, might have felt some need for discretion?

The new edition put all that speculation to rest.  Not many revelations, really, just... more stuff.  The first published volume however made for new questions.  Was this new book really an autobiography, or even a real book at all?  Previous biographers with or without access to all this material, Twain scholars not involved in the project, journalists looking for a peg on which to hang a story, everybody with or without a dog in this fight, weighed in.  Every newspaper, magazine and media outlet had something to say, if not about the book proper, then at least about Twain.

Remember I mentioned how much our buyers bought?  Well, they did a good job.  They backed the book in a big way.  Not everyone in the bookstore business did.  Never the less, not even the most savvy buyers could have anticipated the extent of the interest or the demand for the book.  Quick as it came out, it became something of a publishing phenomenon.  American readers of every description seemed suddenly interested again in Mark Twain. By the time the Holidays rolled around that year, and the press had had its day, no one could keep up with the demand.  For a spell there near Christmas, we ended up being nearly the only game in town for Twain. The Autobiography of Mark Twain: Volume One, became the one book, it seemed, everyone -- or at least every one's grandpa -- was getting from Santa.

As a bookseller, may I say, it was glorious.  There is such a book every Christmas season, some unlikely title, popular enough, but not predictably huge, but for whatever reason, it finds it's way onto every Christmas list.  Every year, first the bookstores, then the distributors and finally the publisher runs out and has to reprint.  The reprinting almost never happens in time to fill all the Christmas orders.  That usually means at least a week or two, sometimes a month or more, of disappointed customers, lost sales and a lot of "If only we'd known!" from the booksellers.

I remember this book and that Christmas so fondly because the buyers and managers at the bookstore where I work were clever enough -- and had the luck -- to see what was coming and they bought every available copy from every available source and all just in time.  Trust me, that never happens.  Ever.  We went into the Season already better prepared for the Twain-craze than most other booksellers.  Our initial order had been, as I've said, substantial.  We sold the lot.  It was wonderful.  (In the Good Ol' Days of course -- back before online and "big-box" retailers, even before the book-chains -- buyers felt free to buy big quantities of whatever took their fancy.  I myself can remember displays of new, hardcover books stacked higher than my head, and nothing special in that.  Bookstores were the only game in town, returns were easy, and a bookstore of any size and reputation at all regularly created their own "bestsellers" based on little else but a buyer's instincts and a publisher's support.  I remember a stack of new hardcovers, a new book on the Federal Reserve, of all things, that a business buyer in a bookstore where I then worked had insisted we would sell for Christmas.  And we did.  Imagine.  Ah, for the days that were, egh?)

This time out, with the second volume of a projected three, the anticipation, as they say, is maybe not so much.  In part, this is just the classic sophomore slump, middle of the trilogy sort of thing.  The anniversary of Twin's death is past.  The media already did this story.  We'll have to see what Santa thinks.

A word then about the books themselves.

I read the first one.  yup, the whole thing, though that statement requires some qualification.  I read the introduction and all of Twain's text.  I read some, but by no means all of the notes and additional matter at the back of the book.  Some.  I can't frankly imagine that anyone not on the project's payroll ever read all of that stuff.  Not that the notes and such weren't interesting, some of them, or necessary -- a number smaller still -- but there was just too much of it all.  The notes made what was already a big book into brick.

The text actually sandwiched between all that extra matter was worth reading, I thought.  I don't think it comes to much as autobiography, and certainly doesn't constitute either a new form or a specially noteworthy example of a writer in self-reflection.  Simply put, it isn't written in any proper sense at all, despite the claims of both author and editors.  It is an old man gabbing, a very interesting old man, for the most part, and a defining American genius, mind, but here, hardly at his best.  He sounds very much like an old man with no one to say him nay, frankly.  There are long, windy passages about people and things he might as well have never mentioned.  There are marvelous vignettes of his childhood and marriage particularly, that will remind the constant reader of scenes from his other books.  As a narrative of his life, this autobiography, in this form, works not at all.  (Luckily, there is still the DeVoto, as well as a number of excellent biographies as well as editions of Twain's letters for that.)  What makes the thing still worth reading, and reading on in, is the opportunity to spend time with the old boy with, as it were, his hair down.  Curiously, the very thing that makes the book less than an autobiography is also what lends it real interest; it is a discursive kind of monologue one would only indulge in a man of genius, and so one does.

The new editors aren't wrong in suggesting that this is a worthy thing to read in total.  It's good, I think, that they've provided readers with their first chance to do so.  I for one am grateful to them for this.  They may explain everything at too great length, but then some of it does indeed require explanation now, and if the price of admission is in listening to not just the old man, but, as it were, his nurses, then so be it.  I at least am eager for Volume Two.

Now, do I think this second helping will go down as did the first?  I can't imagine that it will, for some of the reasons mentioned.  I am nevertheless pleased to see great stacks of the thing already mounting up in our Holiday display.  Who knows but at least some of the people who got the first volume as a gift may, like me, want another volume this year.  The assumption among many booksellers was that the first was probably the least read bestselling book of it's season, and that may well have been the case.  Still, if the second sells even half of what the first did, that would constitute a success, at least in terms of the bookstore's bottom-line.  Read or unread, we'll be glad of the sales this time too.

And, believe it or not, I think  I will be glad to spend some more time with this windy old man this winter, and his rather fussy attendants, if I must.  Let him talk.  Well worth listening to him, whatever the subject.  Clearly, I'm not the only one who thinks so.
Posted by usedbuyer 2.0 at 11:04 PM