But Once a Year

Ah, the tinsel.  Every year, sure as snow in the Little Ice Age, come the Christmas books.  For me, this means research -- at least in so far as the anthologies are concerned. Every year, I read aloud Truman Capote's A Christmas Memory at the bookstore where I work, and every year I look for something different to read as an encore.  Seven years and more than a dozen readings later, I'm still looking.  Almost all my holiday readings other than the Capote, I've found in Christmas anthologies: short stories, most obviously, but also quite a few poems, selections from novels, even an essay once.  Happy labor, for the most part.

Yet, every year, sooner or later, right around now, I begin to lose a little faith in Christmas.  I've read, oh, so many, dated, dreary, deadly earnest Christmas stories.  Oh, so many.  Predictably for one who has read their way through as much Christmas as I have, it's the predictability that tends to knock the shine off the tree-topper -- that, and the endless Christmas tree metaphors.  (So sorry.)  The less than brilliant variations on Dickens' brilliant Carol alone could amply fill the stockings of all the Osmonds that have ever been.  How many ways are there to recast Scrooge?  (Which is not even to explore the ways Scrooge has been cast in movies and television: from Bill Murray to muppets, from Mickey's Carol to Beavis and Butthead -- oh, my.)  Likewise Luke's Gospel (2:7) set now in crowded boarding-houses, modern hotels, diners, etc., you must trust me, is not a new idea.  Should I even mention dead children?  Andersen's "The Little Match Girl" has been played by fictional kids in settings from Brazil to Timbuktu.  She doesn't usually sell matches anymore, but there's still quite a crowd of hapless waifs in the world, drifting off in the arms of the angels even as the blessed day dawns.  It seems, there really is nothing new under Christmas tree.

Most of what I read in the season actually falls into just the two categories: the pre-modern piety -- think Tolstoy's not-so-mysterious stranger knocking --, or mostly mid-century Santa -- Runyonesque rogue has an inadvertently jolly holiday.  Now, the first I avoid entirely, if I can.  Hate fables, generally, and the overtly, unsubtle, Christian ones give me quite the wrong kind of seasonal shiver.  I'll let others put the Christ back in Christmas, if they must.  I prefer my saints in Santa suits and the star I follow on the blessed night is usually Alastair Sims.  Now, this latter, secular sort of story, more typically American in character and humor, I generally dig.  I've a soft spot for the temporarily altruistic drunks and  the shelter-less bums from the likes of Bret Harte and  O. Henry, bless them.  This year's leading candidate for my encore is a Christopher Morley number wherein Santa pulls two bottle of chianti  out of his boots. 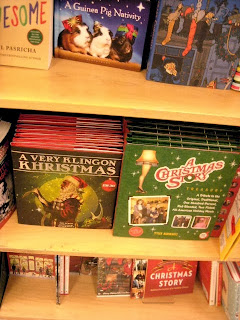 But I've rattled about this problem here every year now for years.  Enough.  Instead, I want to just say a word on a not unrelated issue: the Christmas quickie.  If you've ever browsed a Holiday display in a bookstore, you'll know the kind of books of which I am thinking; little things, mostly, meant as "stocking stuffers," referencing classic movies, or Dickens again, or even the Gospels, books more designed than written, usually picture books with punning titles, pre-packaged nostalgia, "humor" books intended to last but the one Season and then to never be seen again.  (That is, until they show up at the Used Books buying desk in the bottom of a Rubbermaid bin, into which, let me assure you, they will go right back.)

Now, given my personal and professional interest in Christmas literature, and my hard-earned reputation as something of of literary snob, it would seem a safe assumption that this kind of forgettable fluff and nonsense might offend or at least annoy me.  It's true to say that I don't myself feel the need to either own or give as a gift A Guinea Pig Nativity this year.  Surprisingly enough, however, I do not actually disapprove of the thing itself, or really of any of the other titles found around the cashiers' stations in bookstores this Holiday Season.  Honestly, I don't.

Think of all these slim one-offs as just more expensively produced Christmas cards and their function, I think, becomes clear and their value pretty obvious.  As a bookseller, I have to sympathize with the shopper in an Independent bookstore who may or may not be able to find just the right present for, say, that family member or coworker who loves Christmas, but who does not read much in the way of great Victorian novelists.  What these little books do, usually for less than twenty bucks, is give the literate giver something very like  a book that might please and amuse, say, that difficult fourteen year old nephew, or remind the busy father of the pleasure the family traditionally takes in letting the TBS marathon of "A Christmas Story" run all day until the football starts.  (I'm right, am I, in thinking some people watch football this time of year?)

What's more, this sort of thing has become so eye-poppingly professional and visually satisfying in the computer-age, and the jokes so specific and yes, even clever, some of 'em, as to make even the slightest new Christmas quickie a better made object, many of them, than the slickest treacle made for the Holiday traffic back in the day.  The stuff from my own childhood tended to insipidly colored Currier & Ives, Santa cartoons unfunny enough for Parade Magazine, and the Little Drummer Boy un-ironically presented in papier-mache tableaus.  Say what you will about the crassly commercial and perhaps overly colorful cynicism of much of this new stuff, it still beats the Hell out of what one was given at a Sunday School gift exchange in 1968.  Trust me.

So, do I like everything in the way of Christmas and new Christmas books?  Obviously, no, no I do not.  But every year I'm forced to look a little harder than most people, and every year about this time I do get discouraged a bit, and every year... I still like watching the giant, fake Christmas tree go up in the bookstore the day after Thanksgiving.