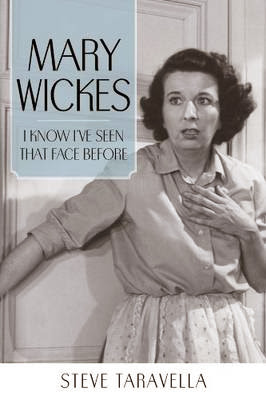 It's right there, in the subtitle of the book, isn't it?  Rather the definition of the character actor.  The great Mary Wickes, however, the subject of this wonderful new biography by Steve Taravella, is in another category altogether.  It isn't simply a familiar face.  This was a face that came with a guarantee: whatever the quality of the movie, play or television show in which she appeared, the minute you see that marvelous mug of Mary Wickes, however briefly, you smile.  Try not to.  Try not to laugh.  She was that good.

There's an affectation common to a certain class of contemporary movie and television stars, particularly as they age out of their physical glory, a bit of bad acting in press interviews wherein said star insists, "I've always considered myself a character actor, really."  This is nonsense, of course; a way of claiming the dimming of their wattage as an exercise in the luxury of choice.  Who, after all, would play Hamlet or Ophelia when everyone knows the really challenging roles in that play are Claudius and Gertrude, to say nothing of the Second, Third or Fourth Player?  Most aspiring performers doubtless dream of what they could do, and do better, in a leading rather than the supporting role, but such is seldom the lot of most working actors. What makes the character actor memorable is seldom the role, but rather the actor.  Character actors play as cast.  They work with the faces nature gave them and in the roles and wardrobe that fits them.  Even when we don't necessarily remember their names, anyone who's seen them do what they do so superbly ever quite forgets them.  Great character actors, like the late Mary Wickes, often as not made something from virtually nothing: a line into a laugh, a take into a turn and a turn, yes, into a whole character.

If you're still not quite sure where you know that face from, Mary Wickes  appeared in dozens of films, hundreds of radio and television shows, in commercials, straight plays and musicals.  In a long career she worked with stars as many and varied as Bette Davis, Ronald Colman, Meryl Streep and Kirsten Dunst -- to say nothing yet of Sigmund and the Sea Monsters.  She played, for the most part, domestics, nuns, nurses and man-hungry old maids.

I probably first fell in love with Mary Wickes when, as the imperious Madame Lamond, she bullied the redhead at the exercise-bar in the I Love Lucy episode titled "The Ballet."  (Lucille Ball and Mary Wickes were the best of friends off-screen, working together in more than a dozen episodes of the various iterations of that great lady's sitcom, and one of the biographer's best sources turns out to have been Lucy Arnez, who considered Wickes part of her family.)  Just as likely, it was the delight of seeing her as the bus-driving nun in gym-shoes in The Trouble with Angels and it's sequel Where Angels Go, Trouble Follows. (Not her only nun, of course.  She's also the sister from whom Whoopi Goldberg takes over the choir in the Sister Act movies.)

Thanks in no small part to the blessing of Turner Classic Movies, and the undimmed power of La Davis, I must by now have seen more times than I care to tell at least two of Mary Wickes' best early turns, both nurses, in The Man Who Came to Dinner, -- usually on around Christmas -- and Now Voyager.  It's in that last where Bette turns to the bashfully flattered Mary and says, "I suspect you're a treasure."   And right she was.

No easy task, trying to recapitulate all those isolated moments on film and video, nor, I should think, to make a full and readable biography of a not quite famous actor who died at eighty five, nearly two decades ago.  It's a tribute to both Taravella's writing and his skill as a researcher that he has managed to make such a good book from such materials.  Many of her fellow players, friends and family being long gone, the successful reconstruction of Mary Wickes' life story depends more than most on her biographer's willingness to seek out the surviving witness where he could still find it.  Happily, Taravella seems to have found more than a few of the actor's dearest friends, many of them the gay men with whom she seemed to be particularly popular.  The result is a surprisingly personable portrait of a sometimes rather prickly lady; forever unmarried, but a working actor, who knew her value, and who kept her distinctly old-fashioned values of thrift, loyalty and personal piety to the end.

Mary Wickes had the good and bad fortune to look like a woman we all of us knew at one time or another: an aunt, a neighbor, a nurse.  She had the talent and the wherewithal to make that familiarity an advantage, and, as her biographer shows, the key to her perfect comic timing.  She knew how to be noticed.  She played off her height, her homeliness, that remarkably mobile, and likable mug.  She was a consummate pro, and a loveable clown.  She knew exactly when and how to react; how big to go in a double-take, how broadly to play a laugh, how high or low to take that reedy voice to make a line, even an utterly forgettable one, funny.  (And given a good line?  There was nobody better.)  In one of the best moments in the book, Taravella quotes from an interview he conducted with the former child actor, Johnny Whitaker, with whom Wickes worked in the Seventies on the Sid and Marty Krofft Saturday morning show, Sigmund and the Sea Monsters.  Nothing very memorable, that effort, though those of us now of a certain age still remember those shows with an undeniable nostalgia.  Whitaker shares with the author his warm memories of Wickes, who played yet another housekeeper on the show, teaching the kid how to do a proper double-take.  Not just one, mind, but the whole, surprisingly subtle repertoire of hilarious reactions that were not only her stock in trade, but sometimes all she was given space to do, sadly, in more than one production.  Whitaker never forgot those lessons, or the wonderful lady who gave them.  (They remained friends.  Wickes later attended Whitaker's wedding, long after he'd left show business.)

It's no bad thing that her biographer should include some detail of the personal and professional disappointment that inevitably came the actress' way in a long and not always easy life.  She would seem never to have had so much as a single romance.  She was the first to play Mary Poppins -- in a television performance of which she was specially proud -- and was bitterly disappointed when Disney later made the musical film, to see the beautiful, young Julie Andrews assume the role.  It seems there were also an estrangement or two, from distant family and more sadly from some once dear friends.  That made the latter part of her life lonelier than perhaps it needed to be.

Nonetheless, the portrait that emerges from this consistently well managed new biography is of someone who will be remembered fondly not only by those of us who know her only from her brief, if much repeated appearance on screens large and small, but also by the many friends and coworkers who still think of the old girl often, and with great affection.  Nearly everyone seems to agree, Mary Wickes could be a hell of a lot of fun -- though she would have disapproved of such language, bless 'er.

I'm so grateful to see such a substantial tribute to such a memorable dame.  Well done all around.
Posted by usedbuyer 2.0 at 8:07 PM