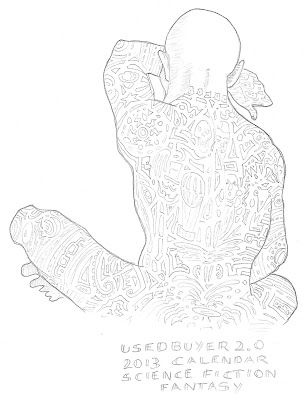 When I put the idea about of a Science Fiction/Fantasy edition of my annual calendar of caricatures, the one name that recurred was the late Ray Bradbury. Understandable. Someone like Bradbury passes and the world loses some magic, a corner of the night sky goes dark, there are fewer dragons, and there are stories now that won't be told. I get it. Looking at pictures online when Bradbury died, I decided there were enough caricatures of the grand old man already. There are some spectacular drawings, some very good portraits, actually, amateur and professional, and lots of good cartoons. I don't like to draw anyone about whom it might be hard to show anything new. I need to have something to say, something to add, when I pick up my pencil.
Still, I tried. For whatever reason, I couldn't do it. I could not draw Bradbury in a way that I liked, in a way that said anything like what I wanted to say about him. He had a great face, and a great face for caricature. I don't mean that as a joke, or say it to be cruel. I like a big nose. I appreciate a substantial eyebrow, a sharp tooth. Can't help it. That's how I see us humans, by the sum of our parts: absurd, asymmetrical, funny, touching, exaggerated, endearingly odd, most of us, our faces anyway. I think Bradbury might have appreciated that perspective, maybe shared it himself. There's beauty in all of us, I think, but it isn't flattered by avoiding time or appetite or any of the stuff that shapes us, body and soul. Still, I just didn't like what I'd drawn.
Then, when I announced the calendars coming soon, again, Bradbury. So... this is what I did. The Illustrated Man may have been the first Bradbury book I read, or not. Doesn't matter. I certainly remember that red cover. This is how Ray Bradbury's death still feels to me. So, here's what I did for the SF/F calendar for 2013. I hope everyone approves.
Posted by usedbuyer 2.0 at 11:54 PM