In Defense of the Lay 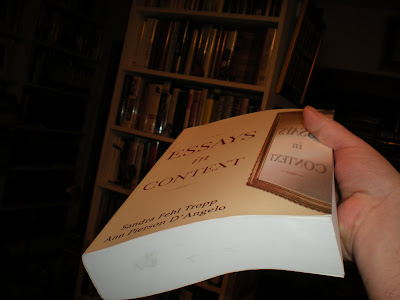 Bought this book off the remainders table today. I'd walked past it for days. That first word in the title,Essays, naturally caught my eye every time I passed, but the rest of it, in Context let me know I probably wouldn't like it, as did the size of the thing, as did the double editors. Two editors, for a book of essays? That suggests a survey rather than a selection. I'd never heard of either, Sandra Fehl Tropp or Ann Pierson D'Angelo, but those tripled monikers also gave off the distinct odor of stacked erasers, as did the weight of the book and the minimal design. Before I'd turned the thing over to see that both editors teach at Boston University, or did at least when the book was published ten years ago, or even opened the thing, everything about its exterior told me that this was a textbook. I don't much like textbooks. But, once I did open the book so far as the table of contents, there were things in it that I rather wanted to read, and as the price was ridiculously small for so big a book, I bought it.

Already in my library there are a few such books, though all of them are considerably older and slimmer than this new one. There are at least a of couple books, including an edition of Addison & Steele, in "student editions" from roughly the turn of the last Century. These tend to have scholarly introductions of some length, notes, and even a few questions for the reader's consideration at the back. The format of Essays in Context is like this, only more so. After a "Thematic Table of Contents," there follows, a Preface, Credits, an Introduction, another piece called "How to Read These Essays", and a "Contextual Timeline", and all of that before the biographical essays that introduce each of the selected essays, each of which is then followed by "Understanding and Analysis," and "Comparison." The Great English Essayists, from 1909, also edited by two scholars I do not know, is part of something called, "The Reader's Library," and it probably comes the closest to being what this new book intends, though at only some 350 smallish pages with a large, clear print, the older book can not be said to cover anywhere near the ground of the new textbook of twice that size, in a much smaller and more difficult type, at least for my aging eyes.

Guess which book I liked better?

I don't intend to bore the reader with point by point comparisons of the two books. The great virtue of the new textbook is obviously its inclusiveness, the older title being limited to just the English, without a woman or a person of color to be found in it. I'm glad I bought the new textbook and had the opportunity to read some essays I might never have found otherwise. The older book, I will be keeping in my library. I only bring either book up to suggest the difference in the style of pedagogy, from the turn of one Century to the next, and to provide, as it were, a context for what follows.

I was excited to see Sarah Bakewell's How to Live, or, A Life of Montaigne in One Question and Twenty Attempts at an Answer reviewed in The New York Review of Books recently (though sadly, I can't find a link to the review itself, so must refer any interested readers to the print edition, March 24, 2011/Volume LVIII, Number 5.) The review was written by Mark Lilla, a Professor of Humanities at Columbia University. Bakewell's book is one of my recent favorites. I've recommended it to friends and to customers at the bookstore, and to my knowledge, to date, it has already sent at least half a dozen readers with whom I am acquainted either back or to Montaigne for the first time. Of this, Professor Lilla would approve. Like Bakewell, Professor Lilla wants more of us reading Montaigne. For the Professor though, how one reads Montaigne would seem to be every bit as important as the doing of it, and his review suggests that Bakewell has not done this properly, at least in so far as she has failed to insist, as the Professor does, that in order to do so one must first read Montaigne's Essays "slowly and straight through". The Professor does not suggest that Sarah Bakewell hasn't done this, only that she hasn't done so correctly. If she had, just by way of one example, she would obviously have reached the Professor's own conclusion as to the vital importance of the Christian context of everything Montaigne wrote, and Montaigne's subtle avoidance of addressing the Gospels directly, presumably to avoid being swept up in the deadly religious controversy of his day. Likewise, had Bakewell done her job as the Professor would have had her do it, she would have sent her readers not just to read Montaigne properly, "slowly and straight through," but on to read Pascal, naturally, as Pascal, according to the Professor, whom I have no reason to disbelieve, was "Montaigne's greatest reader and most formidable critic." So why didn't she?

Well, if I may presume, probably for the same reason that I never went on to read much of Pascal, despite having read Montaigne both incorrectly, essay by essay as my fancy took me, and even correctly, at least once, "slowly and straight through." Truth be told, I found very little sympathy with the little I read of Pascal. But then, I'm not a professor, or even a student of the esteemed Professor, but rather just a reader, a bookseller, and a life-long reader of Montaigne, and a fan of Bakewell's book. I have some excuse, I suppose. But then, by the good Professor's lights, as he is at pains to point out, so does Sarah Bakewell. Despite having authored two previous books of well reviewed history, she is only a "journalist." (Isn't it curious that the Professor, himself a regular contributor to the NYRB, should feel the need to label Bakewell in this way?)

Here then I think we have a representative example of what may have been my problem with reading that new textbook on the essay. I enjoyed reading nearly all that Professor Lilla had to say in his review, about Montaigne. I didn't necessarily agree with his conclusions, but I appreciated his perspective. I did not, as it turns out, need to know what he felt I should in order to read, and reread, and reread, Montaigne. That would be, among other things, for me at least, rather the point of Sarah Bakewell's excellent and amusing book. I don't mean to suggest that Professor Lilla does not understand or appreciate this, but it does seem to me at least that he does not approve of such doin's. What's needed, I would hazard from the Professor's review, in order to read Montaigne correctly, as he is meant to be read, and as Montaigne intended us to read the Essays, -- as the Professor seems to know since he does not hesitate to describe Montaigne's intentions as being other than what Montaigne actually wrote -- is the context the Professor provides and that the mere "journalist", Sarah Bakewell, not only did not, but denies the necessity of, as might Montaigne himself, were I to be so presumptuous as to speak for Montaigne. The argument then would seem to be less about how one reads Montaigne, or any book, any essay, or even why, than it is about in what context Montaigne, or any book, anything, is read. For the Professor, both Montaigne's and the reader's context is all. What Montaigne wrote may never be enough, of itself. The reader likewise. Both require more in the way of contextual grounding, by someone presumably as academically qualified as the Professor, if either is to be thought of as anything more than embarrassingly frivolous. Only a proper exegesis, from a proper source, can justify reading the text. Bakewell's book denies this. So do I.

In their introduction to the chapter called "The Classic Essay" in The Great English Essayists, the editors describe the "aim" of Frances Bacon as being "akin to that of the preacher, only he selects lay topics" -- the italics are theirs -- and they go on to state that the essays by "the inheritors" of this tradition "vary little from sermons save in this, that they lack scriptural texts." The editors go on to say "The intention of Bacon's essays is to instruct; to this end they are made solemn with larges displays of scholarship, and have for theme some abstract subject (...) How much more generous was Montaigne's method, who took himself for the groundwork of his book -- himself, if need be, in his nakedness!" The Professor denies Montaigne his nakedness, insisting that this is but a literary affectation, a sly strategy to avoid the stake. Sarah Bakewell celebrates what the Professor would deny. To my reading of his review, Professor Lilla would have Montaigne be more Bacon than Bakewell, or Montaigne himself, would have him be. The Professor makes an excellent, if for me unconvincing case for Montaigne's Essays as lay sermons. I would be interested to read anything else Professor Lilla may have to write on Montaigne. Sarah Bakewell, on the other hand, makes me want to read Montaigne again.

Who then is the better introduction to Montaigne? Who do you think Montaigne might have liked better?

As for the brick I picked up from the remainder table, I can not imagine a second edition, or any student forced to read it, ever willingly reading another essay, let alone the whole of Montaigne, "slowly and straight through." Teachers, even the esteemed professors at Boston University, to say nothing of their tenured colleague at Columbia, would do well, I think, to remember the warning of the supreme essayist, and amateur scholar, Michel de Montaigne:

"In the education of children there is nothing like alluring the interest and affection; otherwise you only make so many asses laden with books."
Posted by usedbuyer 2.0 at 9:39 PM