Of Pigs and Fodder 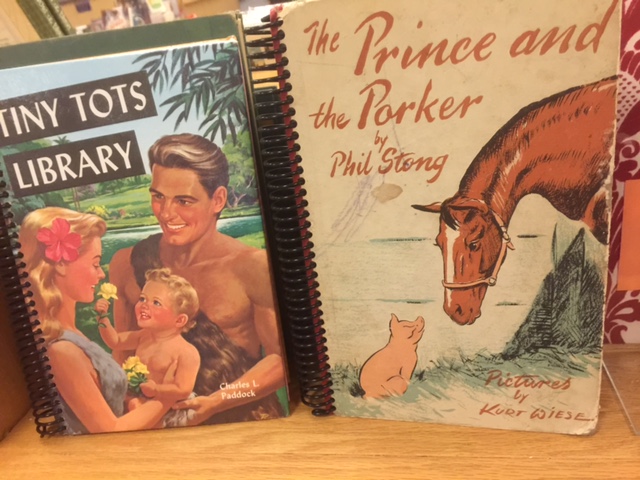 Hard to much mourn the passing away of something called Tiny Tots Library.  From the cover, one has to assume that Tarzan and a very blond Jane were awfully pleased that Boy seemed to take after his mother.  (One must also assume from the cover that somewhere in the jungle there was a duly licensed coiffeur, 'cause those are not hairdos that occur in nature.)

It's hard to tell just what constituted the Tiny Tots Library now.  All that's left of the thing are the covers and a few scattered pages bound into a blank book or journal.  A company called "Ex Libris Anonymous" makes -- or "recycles" -- these very popular journals from discarded library books.  Even the occasional title that may be vaguely familiar can now only be remembered, if at all, "by some awkward experiment of intuition," as Lamb would have it.  As books, these journals are but bones.

Books die.  Not every book, not always, but they do.  Titles go out of print. Authors are forgotten. But worse in a way is seeing books, actual books, of whatever merit, decay and become useless objects; pages scattered, paper made brittle or turned to dust, bindings broken, damp fusing text together into closed blocks of lost words.  As someone who spends his life amidst old books, few stories are as poignant to me as the box from an ill-ventilated basement or a storage locker, a box full of what were once books that simply aren't any more.

At the used desk in the bookstore where I work we take hundreds, if not thousands of donations; books we do not buy because we do not think we could sell them.  If the seller wishes us to we will pass along what we didn't buy to various schools, prisons and charities.  It is, to put it bluntly, a pain in the ass, but still worth the doing as so many of the books we take for donation may still find readers; may yet live again. 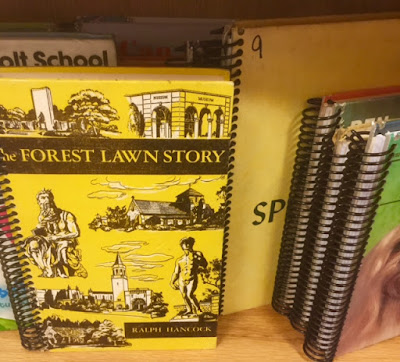 Harder to make any such assumption about a book called, The Forest Lawn Story, though I suppose all things are possible.  We'll never know.  As with the earlier example, all that now remains of this once (potentially) noble history of the famous cemetery are the book's covers and a few random pages inserted as decoration between the blank stock.  (One may have higher hopes of The Prince and the Porker, by one Phil Stong, as a quick check of the Internet shows me that an electronic version of that book, with a different cover, is available for download.  Wonder how many have?  The illustrator, Kurt Wiese ((1887 - 1974)) still rates a brief biography online.  From thence I learn that he illustrated over 300 books.  His pictures for a 1929 edition of Felix Salten's Bambi look familiar.  Then, revelation!  Turns out ol' Kurt was the recipient of multiple Caldecott medals and drew the pictures for the enduring Freddy the Pig books, written by Walter R. Brooks, of course.  Clearly, the man knew his way around pigs.) 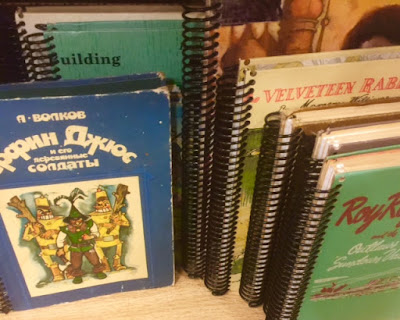 The fact remains that not only have most of these former library books seen better days, but also that many of them may never have had what could be called a popular success.  Even those that did or do yet have readers -- I see a Velveteen Rabbit peeking from the pile -- may have more recent editions to keep their memory evergreen.

As inventive and presumably lucrative as this re-purposing of library discards may be, and as amusing as I confess to finding the perusal of the latest arrivals, the very idea of these blank books frankly makes me more than a little sad.  Hard-nosed used books dealer that I am, I do not imagine most of these old dears deserved preservation.  I do think dead books might, in a more perfect world, be quietly and unceremoniously laid to rest in some less intentionally ironic way; pulped in other words, recycled for their paper, even burned if the thought didn't conjure jackboots and Vonnegut.  Unrealistic, that.  Most recycling operations refuse books.  The process still requires too much labor; separating pages from their bindings, sorting the paper from the pictures and the like, to make recycling books a profitable business.  Better this than the landfill.

I do wonder though that anyone would want to write or draw on a blank page faced by the delight and wonder of a prize Kurt Wiese pig.  Who in their right mind would want to compete with the genius of that? 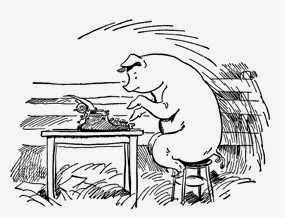