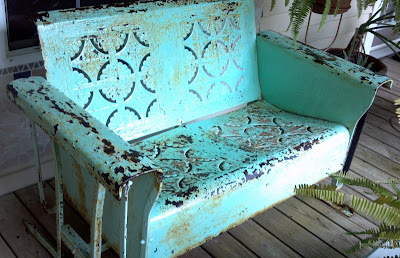 It's yet another phrase from my youth, that.  It's the explanation offered when one's unexpected arrival might otherwise cause alarm:

The first's something both of my grandmothers might have said, did say, on seeing an unfamiliar car, any unfamiliar car, turn into her driveway.  Better than half the time, summer or winter, the car was just looking to turn around.  Still, the driver might wave and grandma wave back, just to be friendly.  If the car pulled on up and the door or doors opened, that's when they'd wonder aloud who on earth it might be.  Might be anybody; not strangers, most likely, or the President of the United States, you understand, but anybody living within the whole history of their acquaintance; remote relations or friends from far off, folks they had not seen in a long while, or maybe someone they saw all the time, come to show off a new car.  Of course, it might not be an entirely welcome arrival either: some new pastor they'd have to feed, or missionaries they'd at least have to ask up onto the porch, or strangers, as unlikely as that was, tinkers, if the car looked bad, offering to gravel the drive or paint.  There was almost as much apprehension as anticipation whenever grandma said, "Now who on earth...?"

Knowing this, feeling exactly the same way themselves when at the other end of a visit, whoever it was come to visit nearly always said so as soon as they were upright and waving hello.  "Just come to visit" meant the impulse was friendly, that they'd not come to stay, didn't intend to let themselves be fed or keep anybody up to an unreasonable hour.  (How far they'd actually travelled, even more than the hour of day, determined how likely anybody was to get away without a meal.  Even saying "just ate 'fore we got here" might avail one not at all if it could be established that more than an hour had been spent in the car.  At minimum, if the visitors sat down, there'd be coffee and a candy-dish.  Everybody knew this rule, thus a good deal of leaning against porch-rails and lingering on steps and insisting one "can't stay" when told to sit every few minutes.  If you sat on the glider, you were going to get a drink.  Sit there long enough, there'd be a plate in your lap, "since you won't come to the table.")

We don't go out much anymore, or have people in, at our house.  We were never "gad-abouts," the two of us.  We're pretty private people, despite how much I talk.  In thirty some years, I can count the parties we've hosted on just my fingers.  As much a function of geography as disposition.  We're homebodies, surely, happiest with our shoes off and our feet up on our own furniture, but also because we've moved around a bit in those three decades and each time, though not by design, further from family and old friends. We don't pay calls because people don't any more. We see people in the day, at work, and then we always come home to each other, every day, like you do when you're content.  Don't mean to be unfriendly by it, it's just who we've been or become.

Recently, the beloved husband, A. has had some bad health, the way you do in your mid-sixties, particularly if you learned to cook at your mother's dimpled knee and like all the wrong foods, like we do.  There have been some scary moments and some worried nights and doctors and more doctors.  We've had to make some changes and to learn to live with some others.  We're doing fine.  He's doing fine, or better at least, but things do change and not always for the better.  Every day though is still good as every day we're still together.

This past month or more people have been to visit.  They've heard the news of this or that worried moment and expressed concern. Some, singly or in pairs, have come up to visit, maybe stay a week and see for themselves that we're okay, honestly.  Their concern has been touching and their company welcome, however it might interrupt our more usual routine.  It's good to interrupt something as complacent as routine.  It's good for us and good for them, I should think, to see that we're happy and happy to see them.  It's good to feed someone other than just ourselves, come to that.  (And it's a good excuse to go off the new diet.)

They've all insisted that they don't expect to be entertained, that they've just come to keep us company.  That's been largely what they've got and, it seems, what we've needed.  We're grateful, not to put too fine a point to it, to see them.

They don't say it, the way they might back home, but really they've all "just come to visit"and stayed a bit.

I can't think of anything nicer than that.

When they go, we miss them and we're glad and grateful they came.  As Montaigne says in another context, but it's as true here, “It’s the enjoyment, not the possession that makes us happy.”  Good to be reminded.  Good to be loved, whether we deserve it or not.
Posted by usedbuyer 2.0 at 8:44 PM